Public denials of the Srebrenica genocide have decreased significantly in the year since a ban was imposed on denying war crimes and glorifying their perpetrators, although prosecutors have yet to bring anyone to court.

Idriz Smajic managed to survive the genocide of Bosniaks from Srebrenica in July 1995, but was injured and had to have part of one leg amputated because he couldn’t get immediate medical help.

Smajic used to live in Bratunac, where there were mass executions of Bosniaks by Bosnian Serb forces during the genocide. He fled, and now lives in Sarajevo and did not return to Bratunac after the war because of the continuing lack of security for Bosniaks in the area.

“For some time I thought I could perhaps return there with my family, because my area was quite acceptable for living, but when I see people being belittled, not having any rights, not having security, I simply didn’t feel safe staying there overnight,” he said.

Genocide denial and the glorification of convicted war criminals is commonplace in the area, Smajic said: “As someone who survived the genocide, I see that genocide denial happens every day, but nothing happens, not a single indictment has been filed.”

Smajic is referring to the lack of indictments since a ban on the denial of genocide, crimes against humanity and war crimes, and on the glorification of war criminals, came into force last year in Bosnia and Herzegovina.

The ban was imposed last July by the High Representative, the international official responsible for overseeing the implementation of the peace deal that ended the 1992-95 war.

The Bosnian state prosecution told BIRN that it has so far received more than 50 criminal complaints about incidents that might have contravened the ban. But no charges have yet been filed.

Prosecutor Oleg Cavka said that in most of the cases, the prosecution has launched investigations and ordered police agencies to collect evidence such as videos of TV shows “in which some undesirable words were said”.

“However, since then we have still not reached the point of having the feeling that all the elements of a criminal offence are in place in such a way that the court might convict or make a decision about someone being guilty,” Cavka said.

The Srebrenica Memorial Centre, which monitors incidents of genocide denial, said that such incidents had decreased considerably since the ban was imposed in July last year.

An annual report due to be published by the Srebrenica Memorial Centre around the 27th anniversary commemorations of the genocide says that cases of denial in Bosnia’s Serb-dominated Republika Srpska entity are five times lower than in the year before the ban.

Edin Ikanovic, who documents such incidents for the annual report, said that since last year more than 400 cases of genocide denial have been registered, but most of them happened in neighbouring Serbia.

“As the report will also show, we shall see that following the adoption of the law there has been a drastic reduction in the number of denial cases in Bosnia and Herzegovina, in the Republika Srpska entity, where the denial actually happened. Talking about percentages, we might say that genocide denial has been reduced by more than 80 per cent when it comes to the Republika Srpska entity,” Ikanovic said.

He noted that Bosnian Serb political leader Milorad Dodik, the Serb member of the country’s tripartite state-level presidency, has remained the politician whose name appears in the annual report most often.

“More than 50 per cent of the total number of denial cases after the adoption of the [amendments to the law] actually came from him,” he said. 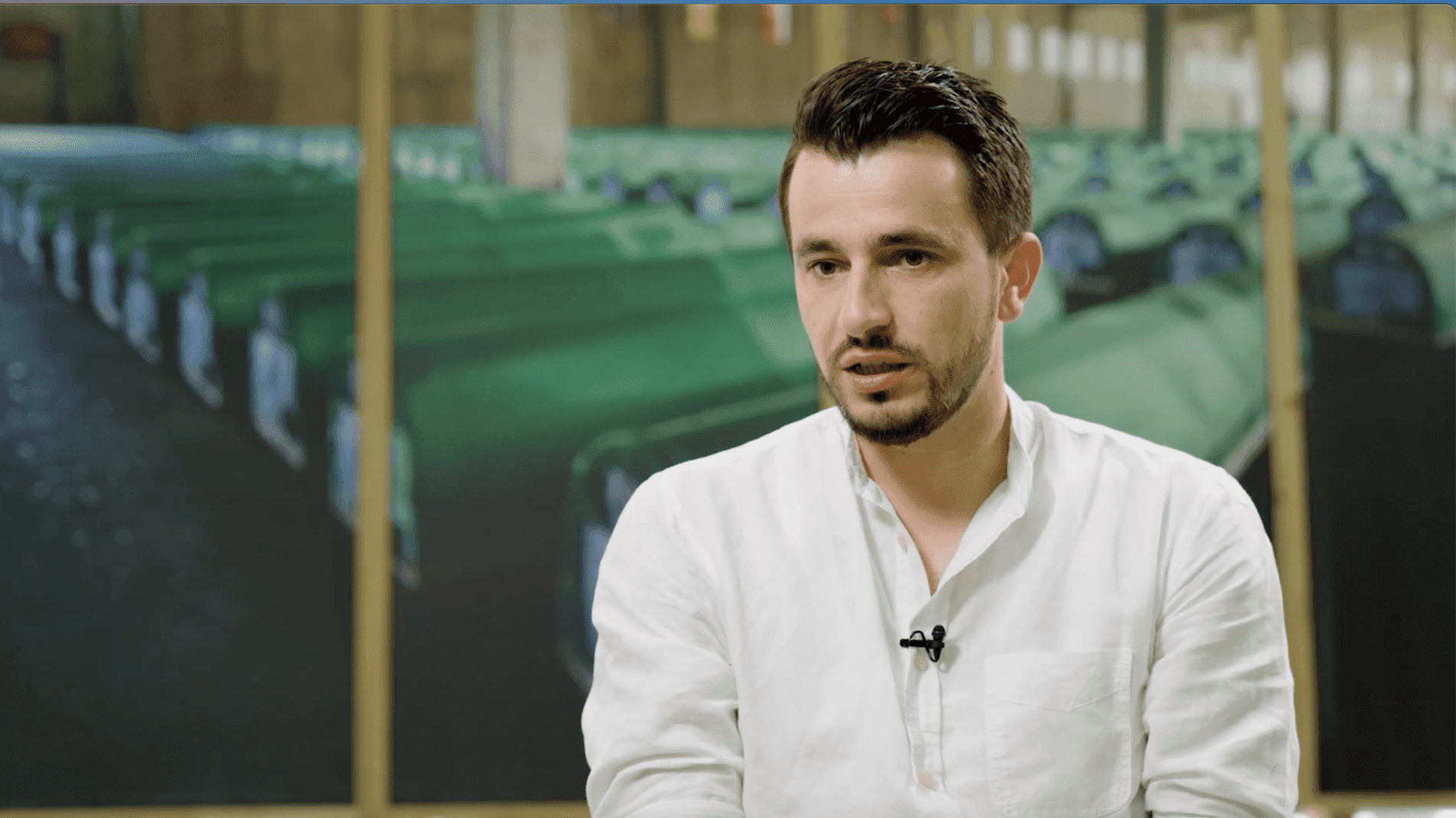 Edin Ikanovic of the Srebrenica Memorial Centre with an image of coffins of the victims. Photo: BIRN BiH

Although the state prosecution claims it is hard to prove that the crime of genocide denial has been committed, Sarajevo-based lawyer Sabina Mehic said that she thinks that the prosecution’s work is actually easier, because an important element of the crime is that the facts are already documented.

“If you have a situation in which an article was published denying genocide, a crime against humanity or a war crime in connection with judicially-established facts or judgments, it is very simple to present that in court, because you have the article as evidence and potentially also some witnesses,” Mehic said.

Since October last year, BIRN’s office in Bosnia and Herzegovina has been monitoring hate speech online through its ‘Hate Mapping’ database, and a number of cases have been registered in which war crimes have been denied or convicted war criminals glorified.

These include the reinstallation of a plaque in honour of Bosnian Serb Army chief Ratko Mladic in the Vraca neighbourhood of Sarajevo and the opening of an office of the Captain Dragan Foundation, an organisation set up by convicted war criminal Dragan Vasiljkovic, in the city of Banja Luka.

After Sakib Mahmuljin, wartime commander of the Third Corps of the Bosnian Army, was jailed for eight years in April, fans of Sarajevo-based football club Zeljeznicar staged a show of support at their stadium and displayed banners describing him as “a hero, not a war criminal”.

Prosecutor Cavka said that he made a note to launch a case the moment he learned that the Mladic plaque had been reinstalled in Sarajevo. “I know for a fact that the case has been launched,” he said.

Mehic said that she believes that the Mladic case can be prosecuted because according to the law, action can be taken against anyone who glorifies a convicted war criminal. But she said that she cannot say the same about the opening of the Captain Dragan Foundation’s office in Banja Luka.

According to her interpretation of the law, only the glorification of people convicted by Bosnian or international courts can be prosecuted.

“This means in practice that a person convicted of war crimes or crimes against humanity or genocide outside those institutions, be it in Serbia or Croatia, despite being convicted of war crimes, cannot be considered to be people whose glorification could potentially be prosecuted before the Court of Bosnia and Herzegovina,” she explained.

Dragan Vasiljkovic, alias Captain Dragan, was convicted of war crimes by a court in Croatia and served his sentence there.

However, Sakib Mahmuljin was convicted by the Bosnian court and the facts of his case are clear, said Milan Mandic, president of the Association of Families of Missing Persons from Sarajevo-Romanija Region.

“They have photo documentation, they have statements, they have everything,” Mandic said.

‘If prosecutors don’t act, it will continue’

The ban imposed last year angered Bosnian Serb political leaders, who refuse to accept that the 1995 mass killings constituted genocide, despite the verdicts of international courts.

However, it’s generally agreed that the denial of wartime crimes has decreased since the High Representative made the legal change using his so-called ‘Bonn powers’, which which allow him to impose legislation if it is vital to maintaining the peace.

“There has been a reduction in tensions over the course of this year since the law came into force. We have not had so many cases of denial in the public arena, at least not by leaders who are some kind of a leading factor when it comes to denial,” said Murat Tahirovic, the head of the Association of Genocide Victims and Witnesses.

But Tahirovic said that the lack of indictments is raising doubts about whether the prosecution is taking such cases seriously and why it “has not processed at least one of those criminal complaints properly and informed the public about its actions regarding the matter”.

Smajic also said that he fears that if violations of the ban are not prosecuted, the denial of genocide and war crimes might make a major comeback in the public arena.

“If the prosecution and laws fail to do anything about it, it will continue to happen in the future,” he said.