Issues of conflict of interest have arisen after a company owned by a town councillor in Srebrenik was recently entrusted with construction of a COVID isolation facility in the town.

Questions are being asked why a company part-owned by a town councillor was awarded a tender to construct an isolation facility and triage centre for treating patients infected with coronavirus.

Experts and anti-corruption watchdogs say firms owned by elected officials should not apply for or receive for tenders issued by the institutions they represent.

The dispute concerns an order of the Crisis Committee in the town to entrust the refurbishment job to Fenix AS, a firm co-owned by Srebrenik councillor Fadil Smajic.

Refurbishment of the facility did not go through regular public procurement procedures either, owing to the health urgency, the town administration told BIRN BiH.

“Following proclamation of the state of natural disaster, the Public Procurement Law was suspended … and the Law on Protection and Rescue has been in force, so the Civil Protection Headquarters no longer carry out public procurement procedures but act on orders,” Mayor Nihad Omerovic wrote in response to BIRN BiH.

The mayor’s response said Fenix AS firm received an order to refurbish the isolation facility on March 19. Mayor Omerovic maintained no conflict of interests had arisen at all.

“The rules of the profession were respected and conflict of interests concerning esteemed councillor Smajic has been completely ruled out,” Omerovic said.

Conflicts of interest are old problem

In its response to BIRN BiH, the Srebrenik town administration also said Smajic was not in fact “the owner of Fenix AS”, calling on the firm’s registration documents.

In an interview with BIRN BiH, Smajic also claimed he was not the company owner – his son was. “I am not the owner, but my son is. Does being a councillor mean I should not work and live?” he asked.

An excerpt from the court registry, which the Tuzla Municipal Court sent to BIRN BiH, indicates that Smajic is, in fact, one of three co-owners of Fenix AS, with a 33-per-cent stake in the company. 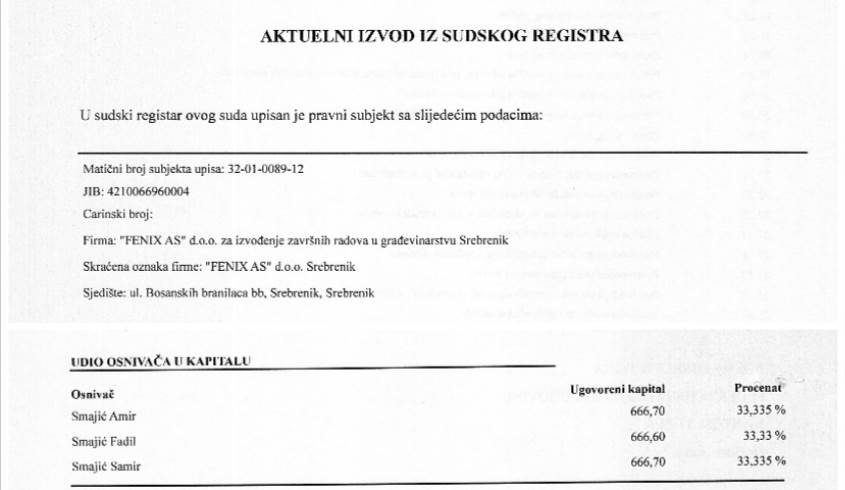 Extract from the court register for “Fenix AS” company. Source: Tuzla municipal court

The director of the Public Procurement Agency, Djenan Salcin, said elected officials with significant shares in companies cannot participate in public procurements, however.

“Under existing Public Procurement Law, elected officials may hold up to 20 per cent stake in companies being awarded jobs through public procurement procedures,” he explained.

“According to a new draft law, which has still not passed through parliamentary procedure, that percentage has now been reduced to 0.5 per cent,” Salcin added.

He said that during the coronavirus pandemic, prosecutors have been paying attention to potential irregularities, including cases of companies owned by elected officials being awarded jobs.

“That can be classified as corruption in public procurement. We have already held online meetings with prosecutors’ offices throughout Bosnia and Herzegovina, calling attention to possible violations of the law,” Salcin said.

The director of Transparency International in Bosnia and Herzegovina, Ivana Korajlic, said a problem relating to determining conflicts of interest had existed in the country’s Federation entity for years, owing to the non-existence of a commission that dealt with the issue since 2013.

“There is no commission [now] determining conflicts of interests. Until 2013, the Central Electoral Commission dealt with the issue, but through a revision to state public procurement law, that competence was taken away … and has never been revised, and a new one has never been prepared,” she added.

“This has left an enormous gap in determining conflicts of interest. We have warned about this for seven years,” Korajlic continued.

She also said that general provisions of national law were being applied in cases where stronger provisions determining conflict of interest should have been applied.

“In such cases, the only checks are on whether the person who signs the contract through public procurement procedures owns the company.

“More precisely, according to those provisions, conflict of interest can only exist if someone concludes a contract with themselves,” Korajlic explained.

Town already had a triage centre

The director of the Health Centre in Srebrenik, Ibrahim Zukic, said a triage centre had already existed in the town before the order was issued to Fenix AS to build a new one.

“On the order of the Federation [entity] Crisis Committee, we formed a triage centre next to the Health Centre immediately.

“Later, the town administration constructed a new triage centre, next to the isolation facility, around 300 meters from the Health Centre. That was somewhat illogical,” Zukic said.

Earlier this year, Fenix AS won another contract from the town Srebrenik, before the state of natural disaster was declared. 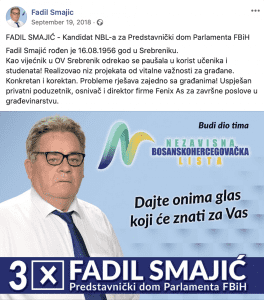 Data on the Public Procurement portal in late February 2020 say the town awarded a tender worth 77,777 marks, around 33,000 euros, through an open procedure to Fenix AS firm for construction of a reservoir in the Gornji Moranjci community.

Fenix AS was the only bidder for the job, offering a construction price that was identical to the estimated procurement value. Nermin Jasarevic, secretary to the Srebrenik administration, said the tender was issued several times.

“There were no bids on previous occasions. Fenix AS eventually applied as the only bidder. The fact that the bid contains the exact cost of works means nothing because when a bidder takes over the tender documentation, they can see how much it costs,” Jasarevic said.

The town administration did not respond to enquiries from BIRN BiH on how much construction of the isolation facility and triage centre would cost in total, and how much they would pay Fenix AS.

Nermin Jasarevic explained that several other local firms had engaged in building the isolation facility by voluntarily donating equipment that was needed.

“During a meeting, all of them gave up [the goal of] profit related to the material. To be more precise, they will not charge for the donated material but only for manpower,” he said.

“For the time being we don’t know how much that will cost. When the extraordinary situation is over, we will form a commission to determine the amount and everything will be done publicly in a transparent manner,” Jasarevic added.

Fenix AS did not respond to BIRN BiH’s requests to comment on claims of conflict of interest.