Far-right Serb organisations, some known to flirt with neo-Nazism, have rallied in support of the Kremlin’s vow to ‘denazify’ Ukraine, winning applause from like-minded groups in Russia.

When Serb nationalists rallied in the Balkans this month in support of Russia’s invasion of Ukraine, they repeated the Kremlin’s claims of “genocide” being committed against Russian speakers in eastern Ukraine and the need to “denazify” the country.

Ironically, however, analysis of photos and videos from the events in Serbia, Bosnia and Herzegovina and Montenegro show that many of those attending belong to organisations known to flirt with neo-Nazism, to engage in genocide-denial and to glorify convicted war criminals.

The far-right, anti-migrant People’s Patrol was one of the main groups behind a pro-Russian march in the Serbian capital, Belgrade on March 4, calling on Serbs to get behind “the Russian and Belarusian people in their fight against the Nazi and pro-Western government from Kyiv.”

Describing Serbs and Russians as “brothers”, Damnjan Knezevic of the People’s Patrol told the crowd: “No matter how hard they pressure us… it is just a drop in the ocean for a Slavic soul.”

Knezevic, who has spoken previously against migrants and refugees, COVID-19 vaccination and integration with the European Union and NATO, wore the letter Z on his jacket, a symbol of support for Russia’s war in Ukraine.

The crowd chanted the names of Russian President Vladimir Putin and Bosnian Serb wartime commander Ratko Mladic, who is serving a life sentence for genocide and other war crimes committed during the 1992-95 Bosnian war.

Among the marchers were Serb members of the notorious Kremlin-backed bikers’ club Night Wolves as well as a number of individuals previously accused of fighting alongside Russian-backed separatists in eastern Ukraine.

Darko Sper, an activist of the NGO coalition Civic Vojvodina, told BIRN the rally in Belgrade was the result of long-standing cooperation between such organisations and Russia.

“Since they first went out into the streets, they have always advocated for ‘Mother Russia’ and claimed that Serbia belongs with Russia, not in the European Union,” said Sper, whose group has organised rallies in support of Ukraine. 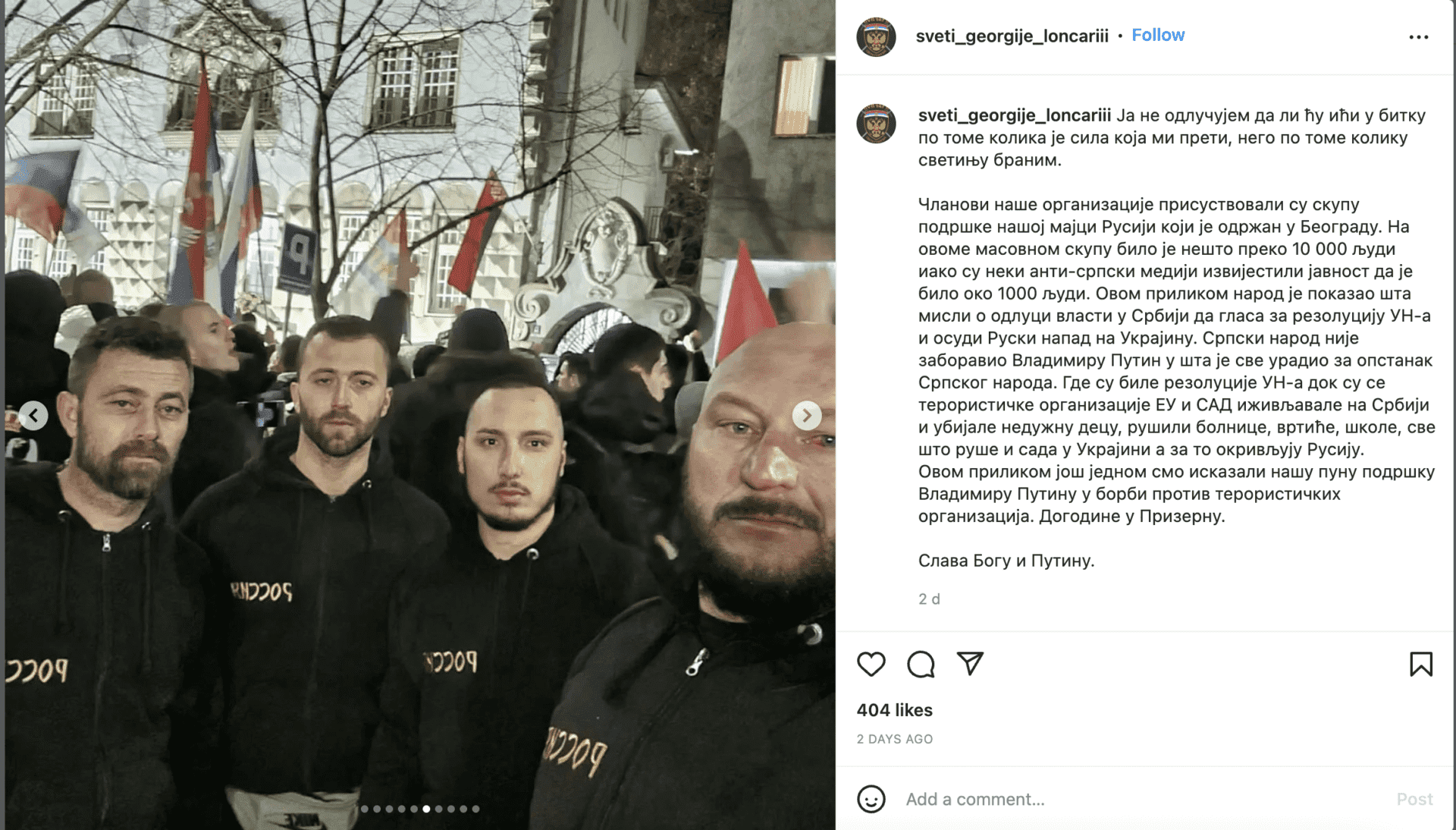 Srdjan Letic travelled from the Bosnian town of Brcko to attend the rally in Belgrade, according to pictures posted on social media. Letic is leader of Sveti Georgije, based near Brcko and which claims to carry out humanitarian work with the help of two cars presented as a gift by the Russian embassy in Bosnia.

Letic is also well-known to police, having been convicted in 2013 of engaging in a sexual act with a minor and in 2007 of falsifying banknotes and trading in weapons. In January this year he was sentenced to six months in prison for causing severe bodily harm but has yet to begin his sentence.

“Nowadays, Russia is a beacon of freedom. That is why we, the Serbs, have an obligation to stand by our Mother Russia.”

Obraz was outlawed under a ruling by Serbia’s Constitutional Court in 2012 due to violations of human and minority rights and incitement of ethnic and religious hatred.

Obradovic then founded the Russian-Serbian Cultural Centre, renamed in 2019 as the Obraz Saint Sava Society.

Also in attendance was Milica Djurdjevic Stamenovski, a prominent member of the Serbian ‘Zavetnici’ party, which was identified in a 2019 report by the Riga-based NATO Strategic Communications Centre of Excellence as having direct links with Moscow.

Holding a Russian flag, Gavrilo Stevic, who was acquitted by a Bosnian court in March 2020 of fighting alongside Russian-backed separatists in eastern Ukraine in 2014, was among the marchers.

From Belgrade to Banja Luka and Podgorica

A recording of the performance of the anthem of the Russian Federation at the protest in Belgrade. Photo: Mladen Obradovic.

Rally photos and posts by right-wing organisations in the Balkans were quickly shared on the social media accounts of similar organisations in Russia, particularly on Telegram or the Russian answer to Facebook, Vkontakte.  Since the war began, Russia has blocked Facebook and Twitter.

The Russian Imperial Movement, an ultranationalist, white supremacist militant group designated a terrorist organisation in the US and Canada, was particularly interested, as were Alexander Zaldostanov, leader of the Night Wolves and a friend of Putin, and the Union of Donbas Volunteers, which brings together volunteers who fought on the side of pro-Russian separatists in eastern Ukraine.

In December, the Russian Imperial Movement held protests in support of Mladic outside the Bosnian embassy in Moscow, while at the same time the far-right group Serb Action protested outside the Ukrainian embassy in Belgrade with a banner declaring ‘Stop Russophobia.’ Serb Action also attended the pro-Russian rallies and in early February paid tribute to Milan Nedic, who led a Nazi puppet regime in Belgrade during World War Two.

In Bosnia, the association Eastern Alternative organised a small protest in the eastern town of Bratunac in support of Russia, Radio Free Europe reported.

“Our association objects to NATO expansion, so we have given our absolute support to the Russian Federation,” association leader Vojin Pavlovic told BIRN Bosnia and Herzegovina. His organisation is known for putting up posters of Mladic.

Elsewhere in Bosnia, football fans in Banja Luka, the main town in the predominantly Serb-populated Republika Srpska entity, flew the Russian flag during a match involving Borac on March 5, while the Bosnian branch of the Night Wolves organised a rally in Trebinje, southern Bosnia.

The Night Wolves were also represented at a rally in the Montenegrin capital, Podgorica, on March 2, alongside members of the Serb nationalist Ravna Gora Chetnik Movement.

“We are sorry that people are suffering, because the majority are Orthodox Christians, just like us. But it is the work of great powers with the help of NATO,” said Mileta Pavicevic, a leader of the Ravna Gora Chetnik Movement which has been accused of financing the travel of volunteer fighters from the Balkans to eastern Ukraine. The Chetniks were a Serbian nationalist guerrilla force that collaborated with the Nazis in fighting communist Partisans of Josip Broz Tito.