The UN court in The Hague rejected the former Bosnian Serb military chief’s appeal against his conviction and sentenced him to life imprisonment for genocide and crimes against humanity. 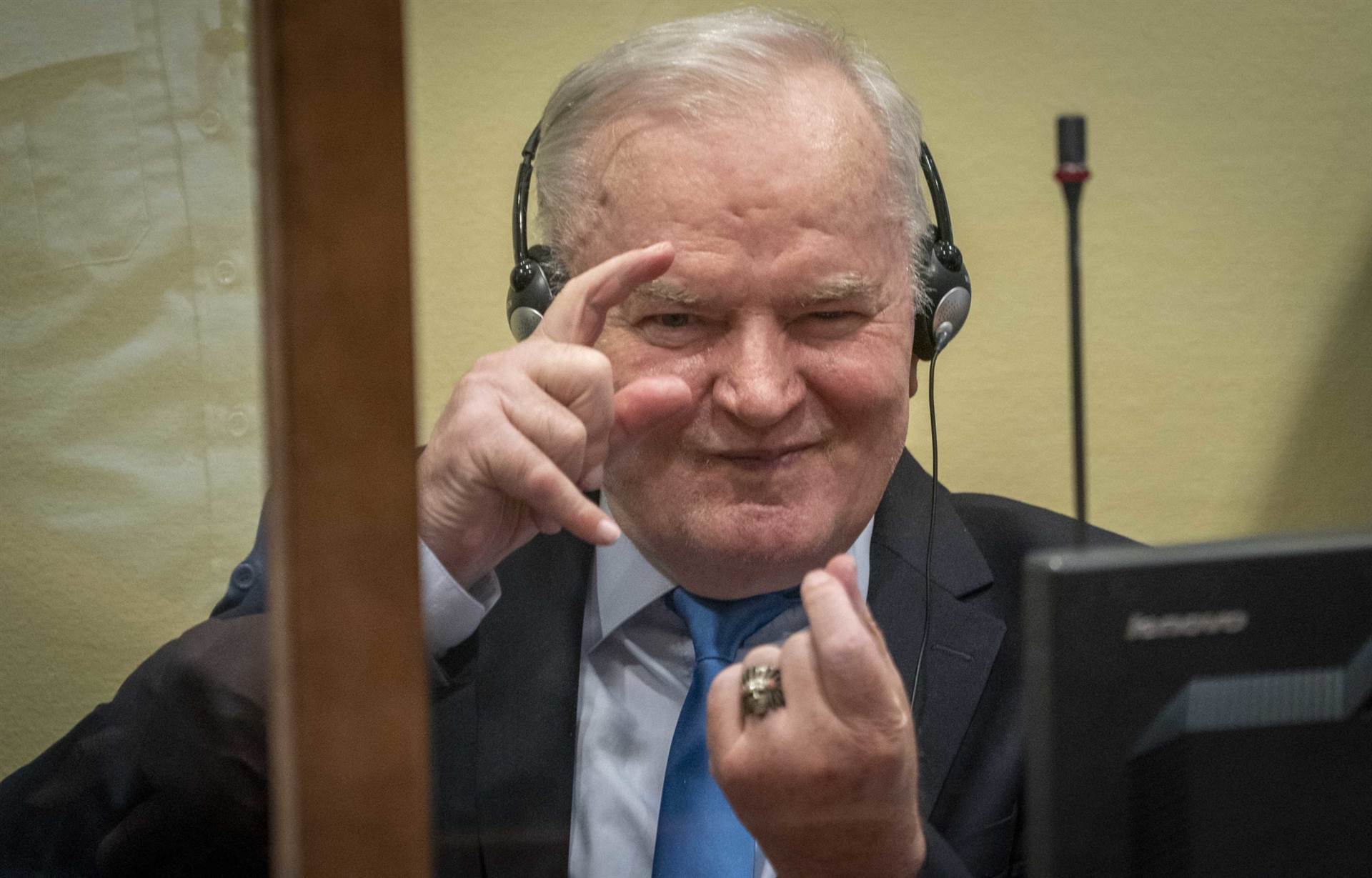 Ratko Mladic in the courtroom in The Hague on Tuesday. Photo: EPA-EFE/Peter Dejong/Pool.

The Mechanism for International Criminal Tribunals in The Hague on Tuesday confirmed that Ratko Mladic will serve a life sentence for his role in the worst atrocities in Europe since World War II.

The court’s appeals chamber upheld the initial verdict convicting the former Bosnian Serb military leader of the genocide of Bosniaks from Srebrenica in 1995, the persecution of Bosniaks and Croats across the country, terrorising the population of Sarajevo with a campaign of shelling and sniping during the siege of the city and taking UN peacekeepers hostage.

But Mladic was acquitted of genocide in five other Bosnian municipalities in 1992 – Prijedor, Sanski Most, Kotor Varos, Foca and Vlasenica.

In a hearing held under pandemic-related restrictions and dogged by technical problems, with presiding judge Prisca Matimba Nyambe appearing via a video link, the court rejected claims from Mladic that he did not receive a fair trial, or that his health problems had been overlooked.

Mladic, 78, attended the trial hearing in person wearing a dark suit and blue tie, accompanied by a legal counsellor but without his usual legal team.

The court rejected Mladic’s argument that he was not physically present during the killings of more than 7,000 Bosniak men and boys from Srebrenica in July 1995, and agreed with the initial verdict’s finding that he was part of “a common criminal plan to commit genocide, extermination and murder”.

It also rejected his claims that his actions in Srebrenica were actually “humanitarian”.

“The appeals chamber, with judge Nyambe dissenting, considers unconvincing Mladic’s allegations that he acted with the goal of performing a humanitarian evacuation of civilians,” judge Nyambe said.

The court further rejected his claims that “he only sought legitimate military success rather than permanent removal of Bosnian Muslim and Bosnian Croat civilians” from municipalities across the country during the 1992-95 war.

It also dismissed his claim that Sarajevo was a “defended city” during its three-and-a-half-year siege by Bosnian Serb forces, and upheld the findings of the initial verdict that said he had the “objective of spreading terror among the civilian population of Sarajevo through a campaign of sniping and shelling, including through the commission of murder, terror, and unlawful attacks against civilians”.

However, the judges dismissed the prosecution’s appeal related to the alleged genocide in five Bosnian municipalities in 1992, saying that it had not demonstrated the existence of a threat to the survival of Bosniaks in these communities.

The guilty verdict was welcomed by survivors of the war in Bosnia and Herzegovina.

Refija Hadzibulic, one of the mothers of the victims of the Srebrenica genocide, said it was a recognition of their suffering.

“It means a lot to us to know that there was a genocide, that they committed genocide. Because they always deny it. And now they can’t deny it, the whole world sees what happened and what they did,” Hadzibulic said.

It was also welcomed by Western political leaders including US President Joe Biden.

“Justice and reconciliation are the foundation for peace and stability for the future, and today’s decision is also an important confirmation that this is possible. I sincerely hope leaders in the region will respect this judgment and reinforce its importance for the rule of law,” Biden said.

“My thoughts today are with all the surviving families of the many victims of Mladic’s atrocities. We can never erase the tragedy of their deaths, but I hope today’s judgment provides some solace to all those who are grieving,” he added.

The Bosniak and Croat members of the Bosnian tripartite presidency also welcomed the verdict, although some Serbs continued to accuse the court of bias.

The head of the tripartite presidency, Milorad Dodik, who has long been the most powerful Bosnian Serb politician in the country, said that the Mladic verdict “has nothing to do with law and justice”.

Dodik told a press conference that the trial was held in order to “Satanise” Serbs, and claimed that “an attempt is being made to create a myth about the genocide in Srebrenica, which did not happen”.

The chief prosecutor at the UN court, Serge Brammertz, appealed to political leaders in the former Yugoslavia to accept that Mladic was one of “the most notorious war criminals in modern history”.

“Mladic should be condemned by all responsible officials in the former Yugoslavia and around the world. His name should be consigned to the list of history’s most depraved and barbarous figures,” Brammertz said in a statement.

“This is not a judgment against the Serbian people, who Mladic and his supporters have manipulated for decades. Mladic’s guilt is his, and his alone,” he insisted.

Tuesday’s verdict is final and cannot be appealed.