Emir finally felt comfortable enough to place on the table the sheets of paper he had folded and hid under his jacket. The pages contained promotional material of a far-right organisation he had helped build.

Emir, a slight man in his twenties, appeared confident that this reporter did not know his real name; when it became clear he was mistaken, he paused for a moment before describing his experience of joining the ‘Movement’ as a teenager.

“I felt powerful in some way,” he said, having agreed to be interviewed on condition his real name would not be published. 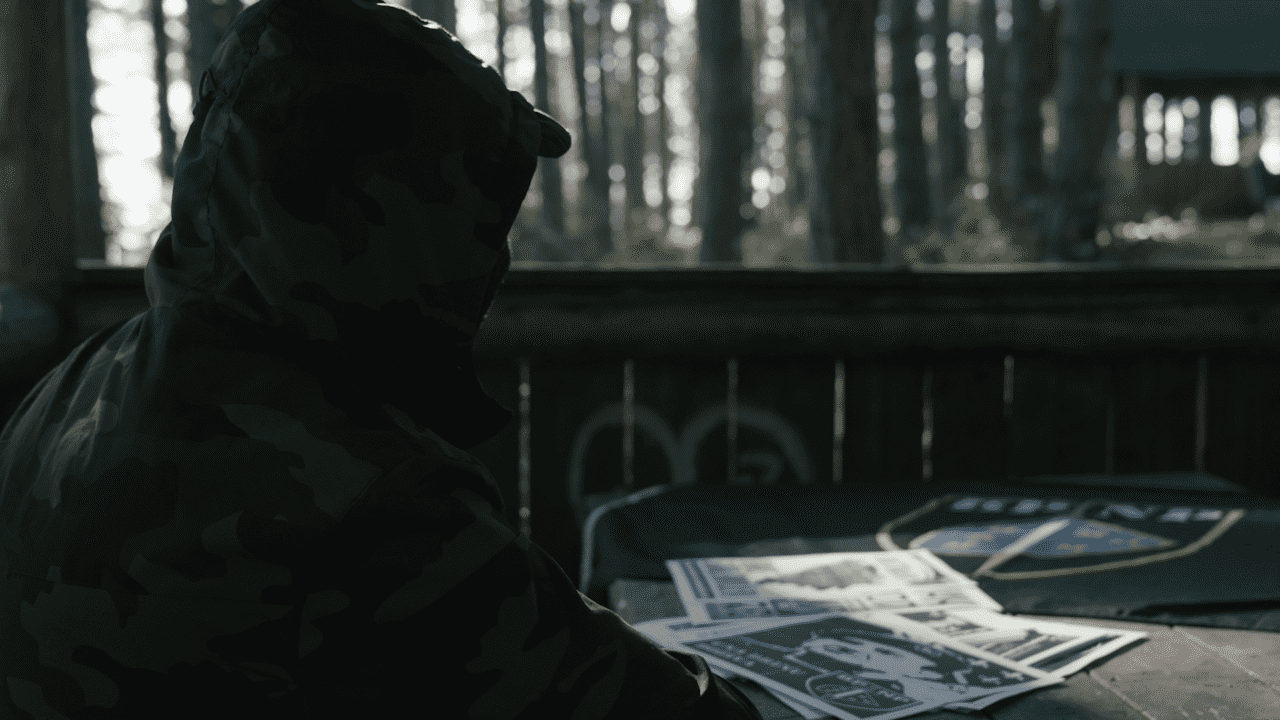 Former member of BPNP during the interview with BIRN. Photo: BIRN

As a minor, Emir was drawn to the hardline Bosniak nationalism of the Bosnian Movement of National Pride, BPNP. But he hoped the anti-Semitism and fascism would not be too visible, not to draw the attention of the authorities.

“I knew there was Nazism,” he said, claiming to have since left the group. “I hoped it would not be on display so much.”

But Nazism is what the BPNP openly espouses. And for more than a decade it has avoided all official scrutiny, while keeping the names of those who run it under wraps.

This investigation lifts the lid on the group’s membership, its recruitment of minors and its ambitions. 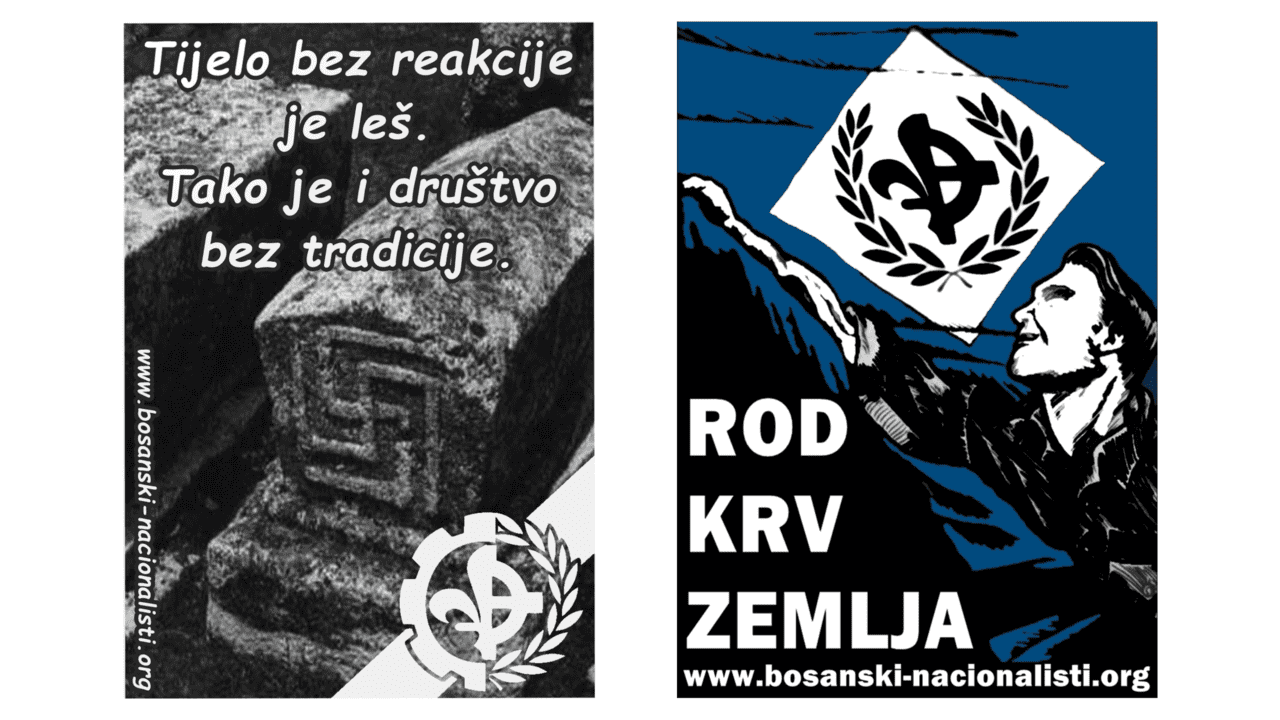 Founded in 2009, the BPNP was described in 2018 report published by the International Relations Committee of the House of Lords – the upper house of the UK parliament – as a “nationalist and secular organisation whose ideology is underpinned by a belief in the superiority of Bosniaks and a belief that they alone should rule Bosnia and Herzegovina.”

The Simon Wiesenthal Centre says it follows a ‘blood and soil’ ideology that aims for a pure Bosniak state based on ‘genetics’.

“They are against multiculturalism because it is considered a threat to the survival of “true” Bosnians,” the centre says. “The BPNP stands against Zionism, Islamism, Communism and Capitalism. The movement is strongly homophobic, arguing that homosexuality is destroying society through its threat to ‘family values’.”

At first glance, the group’s opposition to ‘Islamism’ might appear odd, given that the vast majority of Bosniaks identify as Muslims.

But the group’s members say they characterise ‘Bosniak’ as a person loyal to Bosnia, who speaks the Bosnian language and identifies with the history of Bosnia, regardless of their religion.

According to the group’s website, the BPNP “fights for Bosniaks irrespective of their religion and subrace.”

More than anything else, it promotes National Socialism, better known as Nazism.

At least one former member of the BPNP is politically active today.

The group expresses admiration for right-wing groups in Europe, rails against Jews and other minorities and aspires to create a state of “only people who belong to the European genetic and cultural heritage, including Bosniaks.” There would be no room for LGBT persons or media freedom.

Emir said that at one stage he wanted to officially register the movement but his fellow members did not want to officially abandon the neo-Nazi ideology this would have required.

Several former members of BPNP told BIRN that the money and the decision-makers behind the group come from the large Bosnian diaspora.

“The money was used for stickers, T-shirts, flags and posters,” said one former member, a Sarajevan BIRN will identify as Nedim for the purposes of this story.

The group’s webpage – bosanskinacionalisti.org – is one avenue of recruitment, describing members as “bearers of a new wave of Bosniak nationalism, pride and traditionalism,” not “humanitarian workers or messengers of compromise and harmful peace”.

The group’s posters can be found across the country, featuring symbols of white supremacy, while its Twitter feed lionises Hitler.

BIRN tried to contact the organisation via the email address listed on its webpage but received no response. 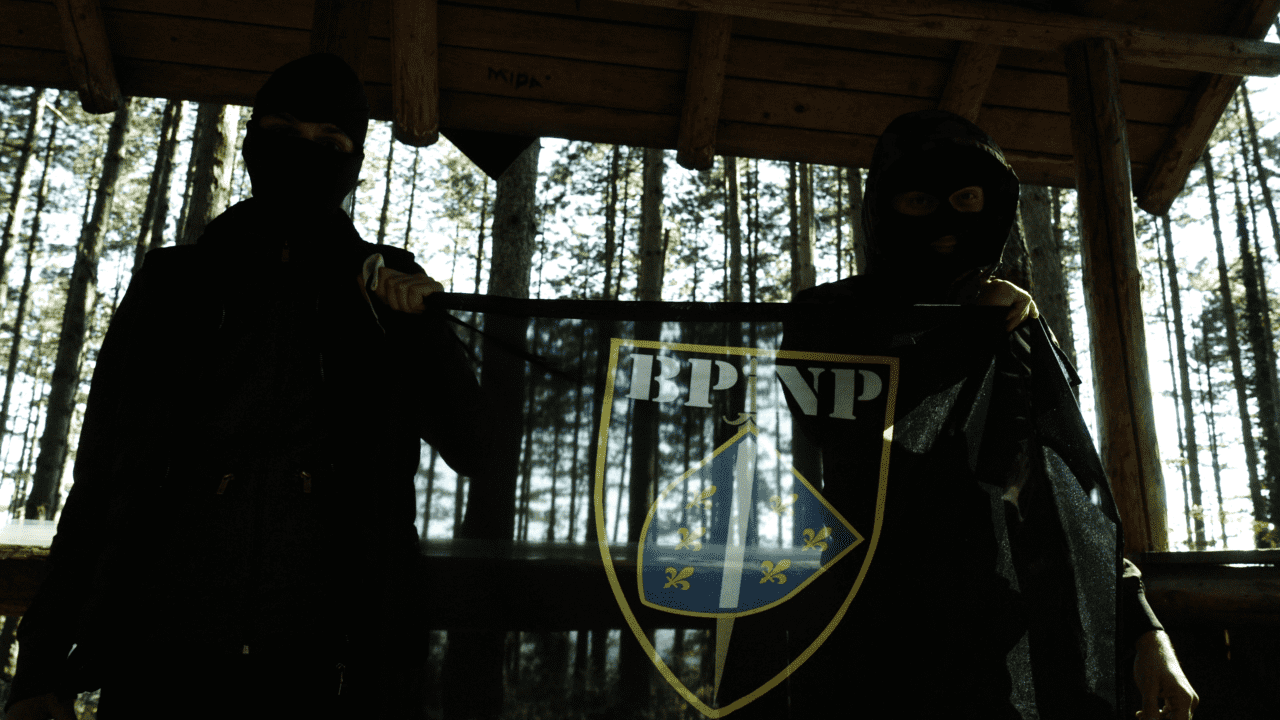 Dr. Bethan Johnson, doctoral fellow at the Centre for Analysis of the Radical Right, CARR, a UK-based research centre, said it was interesting that the BPNP would openly embrace a term most groups of a similar ideology hesitate to use, “because it does have a stronger harkening back to Nazis than other terms that might be used to describe people.”

The displaying of Nazi symbols is not banned in Bosnia, but BPNP member nevertheless seek to conceal their identities.

BIRN journalists identified at least ten current or former members of the organisation, who describe themselves on social media as Skinheads and “members of the Handschar Division,” a reference to a World War Two Nazi SS division composed of mainly Bosniaks, some Croats and ethnic Germans that swore allegiance to Adolf Hitler and fought against Yugoslav communist Partisans. 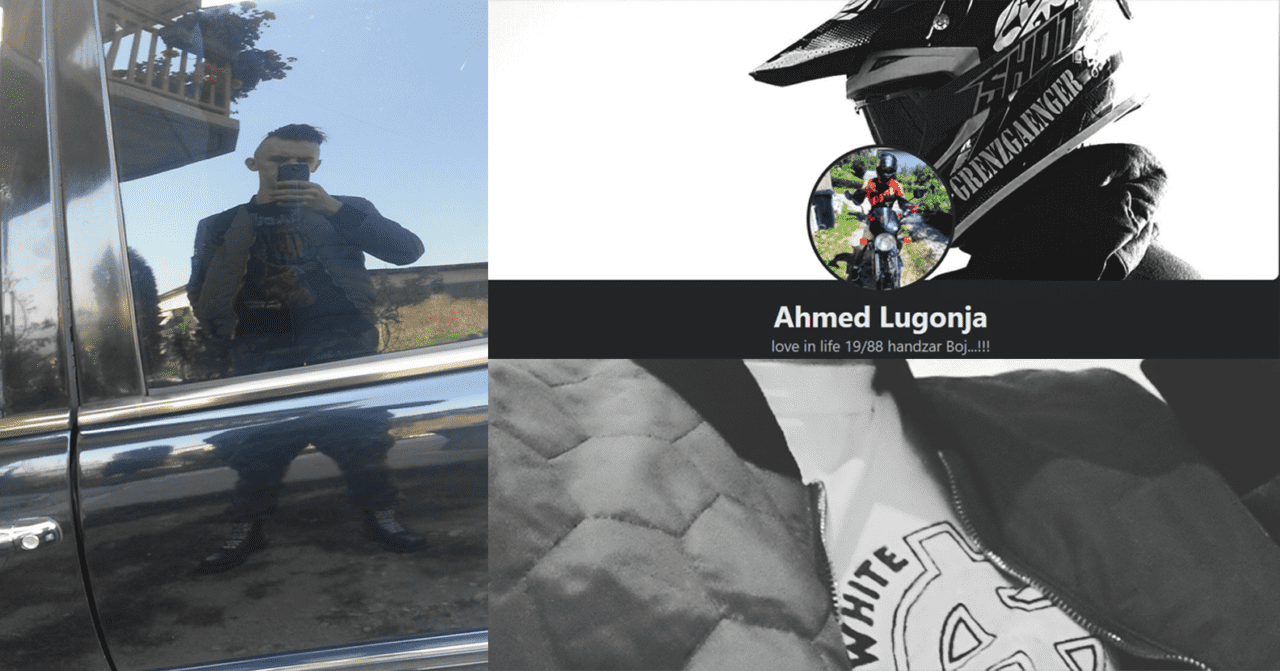 Most BPNP members – according to analysis of social media profiles and interviews with those who say they have since left the movement – join when still minors, which in Bosnia means under the age of 18.

Two former members, one of them Nedim, told BIRN they joined as 17 year-olds. For both, the process began when the ‘liked’ the BPNP pages on social media and started following hardline nationalists.

Nedim, from Sarajevo, said that four years ago he began following pages promoting propaganda against the LGBT community and Communism as well as calling for Bosniak unity.

“When you like those posts or comment on them, they see that and call you. That is how they added me to that group,” Nedim said. He was added to a secret group.

Of BPNP, he said: “I investigated the idea and I liked it – the national-socialism. I admit I wanted to belong to something at the time.”

“I needed something else to complete me, to have something to do before and after school. I was interested in that idea, I was an anti-communist.”

Nedim said that instead of watching Holocaust documentaries on television he searched out Holocaust-denial on YouTube. He still does not believe the Nazis killed six million Jews during WWII.

Emir described himself as a former leader of the BPNP branch in the northeastern city of Tuzla.

Before becoming a member of the group, he downloaded a photo of the then leader and posted it on his profile.

“After that he started following me and when he saw me in the city, he approached me,” Emir said. “That is how we met each other. He knew me from Facebook.” The then leader invited him to join. Emir was 17 years old.

Johnson, from CARR, said that social media has become an important tool of recruitment given the level of anonymity and confidentiality it offers.

“That radicalization largely happens online now through social media, or at least initially on social media, and then increasingly moves from open source, open facing platforms like Facebook or Twitter, Instagram, and moves towards end to end encrypted sites and platforms like Discord and Telegram, among others,” Johnson told BIRN.

BPNP members revere the group’s flag, bearing a coat of arms in the shape of a black shield surrounded by golden lines and the letters BPNP at the top.

Emir said he still has the flag that each branch receives.

“You would have to kiss the flag when reaching for it,” he said, and fight anyone who tried to take it. 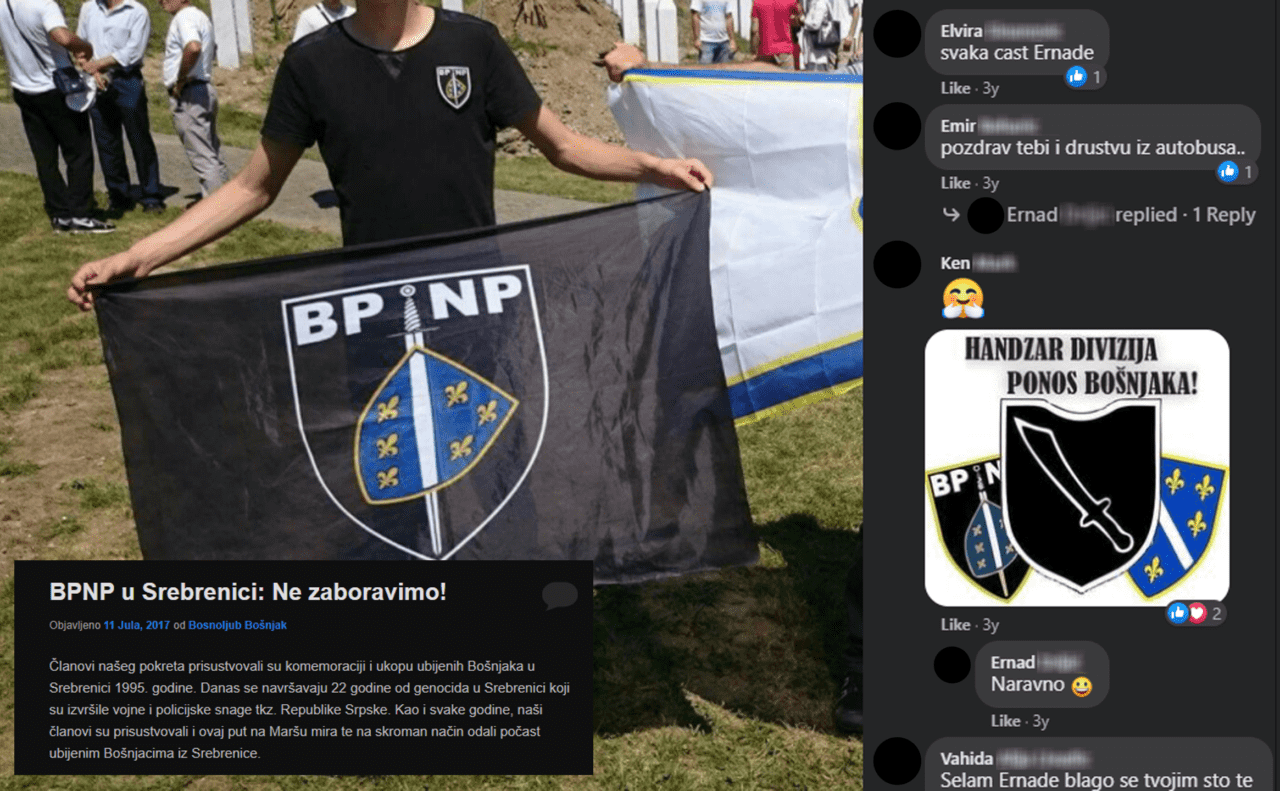 Ernad Drljic from Tuzla pointed out the BPNP’s flag in Srebrenica. Illustration: BIRN

Another man pictured with the flag on social media was Ernad Drljic from near Tuzla.

Drljic declined to discuss his activities while part of the group, saying he was underage at the time and was not completely aware of the nature of the organisation. He said he was not an active member and was now politically engaged in his local community.

According to his social media profiles, Drljic is a member of the Party of Democratic Action, SDA, the main Bosniak party in Bosnia.

Other people BIRN was able to identify as members or former members were Alen Zunic from Tuzla and Ahmed Lugonja from Novi Travnik. Contacted by BIRN, Zunic denied being a member anymore, saying the group’s members were “not serious”, nor were they “terrorists”.

Lugonja, whose social media profiles, before they were deactivated, were littered with Nazi and white supremacy symbols, declined to speak about his membership of BPNP.

Four years ago, five individuals displayed the BPNP flag alongside the flag of the Nordic Resistance Movement, NRM – a neo-Nazi movement active in Finland, Norway and Sweden. The NRM was banned in Finland in 2017.

Haris Husaric from Tuzla posted a photo on Facebook in March 2016 with the NRM flag, a photo also posted on a BPNP webpage. He also shared several other photos of BPNP members, their faces blurred, and a photo of young men bearing the SS insignia.

Contacted via Facebook, he declined to speak for this story and subsequently deleted his profile.

Members are supposed to keep their affiliation with the organisation low key.

“They did not want this to interfere with their private life. They wanted to remain secret,” Emir said.

Emir had wanted to register the group and launch a political party.

“I moved towards legalisation; I didn’t want us to stay in the dark,” he said. “We also planned for uniforms to be made.”

But the leadership decided against, and Emir recalls internal debates about having to abandon neo-Nazism for the sake of legalisation.

“It was not enough to just remove the insignia, but the ideology had to be changed too,” he said. “You cannot follow Hitler’s ideology; you cannot support an ideology in favour of killing people. You must be clean. Be clean on paper.”

The BPNP has not visibly posted on social media for several months.

But Nedim, who left in 2019, said he had been contacted again in January of this year about a resumption of activity. “I said I wasn’t interested,” he said.

He said he quit the group because of his studies and for religious reasons too.

“I came to the conclusion that I need nothing more than the Quran,” he said. “I don’t think I need any other directive except Islam. I sought something else for nothing.”

Yet he has not abandoned his beliefs about the Holocaust and National-Socialism.

“Am I glad I was a part of that? I am neither glad nor sorry,” he said.

Former BPNP members who spoke to BIRN said the organisation was not violent and had not had any problems with the police.

They denied accusations that members of the group were behind attacks on anti-fascists or the desecration of the Jewish cemetery in Tuzla.

Yet in 2018, a YouTube account under the name of the BPNP posted a video – entitled ‘You can’t stop us’ – bragging about an attack on anti-fascists in Sarajevo.

An antifascist activist in Sarajevo, who asked not to be named, told BIRN that the incident happened in 2013. “They showed up with banners and spat on one man,” he said, describing the attackers as a group of three men.

The Ministry of Interior of the Sarajevo Canton said it was aware of the group’s existence and passed on information about individual members of such right-wing organisations to the Federal Police Administration. The Administration said it had no information on the BPNP.

In Bosnian River Town, Far-Right Symbols and a Link to Ukraine