BIRN is supporting the development of educational material about war crime trials, focusing on cases from the Hague Tribunal, to help build awareness among young people and challenge the continuing political manipulation of wartime history. 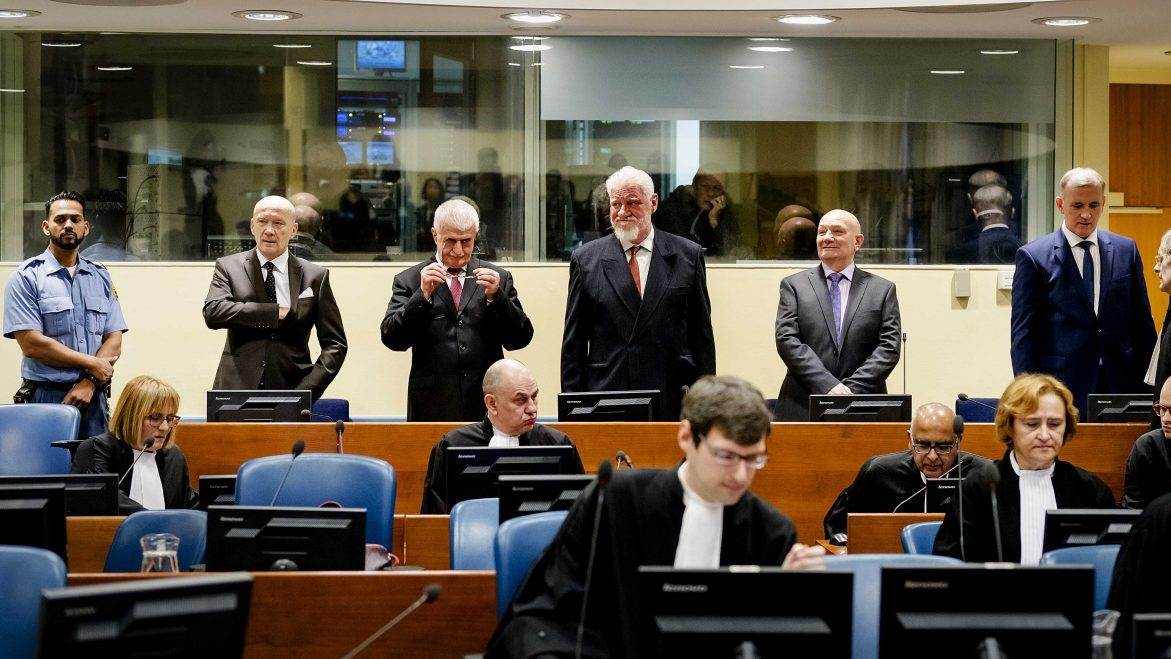 Defendants including Bosnian Croat general Slobodan Praljak (centre) in court in The Hague in November 2017 – a case that was used as the basis for some of the educational material. Photo: EPA-EFE/ROBIN VAN LONKHUIJSEN

BIRN’s Transitional Justice Programme is supporting a project to create educational content based on archive materials from the International Criminal Tribunal for the Former Yugoslavia, ICTY, designed by an independent education specialist from Croatia, Tvrtko Pater.

The aim is to build critical thinking, legal understanding and human rights awareness among students in a region where the past is often misused for divisive political goals, and to provide teachers with the tools to foster discussion about complex and controversial topics in an engaging and depolarising way.

Pater was one of 20 people, including journalists, historians, artists and activists, who were awarded grants under BIRN’s Transitional Justice Programme to create work based on the archives of the UN tribunal in The Hague.

Pater used ICTY archive materials as his source for two sets of lesson plans for use in history, civic education or sociology classes, as well as case materials for war crime trial simulations that deal with the topics of the destruction of cultural heritage and sexual violence in conflict.

For one of the lesson plans, Pater focused on accusations against Bosnian Croat general Slobodan Praljak, who was acquitted of destroying the Old Mostar Bridge, a landmark Ottoman-era bridge in Mostar in Bosnia and Herzegovina but found guilty of other crimes and sentenced to 20 years in prison. Praljak took poison in the courtroom when the sentence was being read and died soon afterwards.

For the other lesson plan, Pater focused on the sexual violence allegations against Dragoljub Kunarac, the commander of a reconnaissance unit of the Bosnian Serb Army in the Foca area of Bosnia.

Kunarac was found guilty of crimes against humanity and violations of the laws or customs of war – including torture, rape and enslavement – and sentenced to 28 years in prison.

Pater’s case materials for war simulations will be used from 2021 onwards at the Model International Criminal Court Western Balkans, MICC WeB, an educational project that simulates ICTY cases and verdicts for young participants.

“Thanks to the BIRN Transitional Justice Programme grant, the MICC WeB educational programme – with renewed educational materials about the destruction of cultural heritage and sexual violence in times of conflict – will continue to challenge and deconstruct the dominant, divisive war crime trial narratives currently existing in our respective countries; build critical thinking, and develop youth resilience to political instrumentalisation of transitional justice and history, as well as to nationalism,” Pater said.

The wartime history of the 1990s is either not taught in classrooms in the Western Balkans or taught from a one-sided, nationalist perspective.

Transitional Justice Programme coordinator Jovana Prusina said that the materials created by Pater are a great example of using the ICTY’s archives creatively.

“BIRN started its granting scheme aiming to encourage and create opportunity for journalists, researchers, activists and others to explore court archives, thus contributing to the reconciliation and memorialisation processes in the Balkans. Tvrtko’s project is a great example of that,” said Prusina.

“By creating such educational toolkit, many students will be able to learn more about the past from an early age and to participate in creating fact-based narratives about wartime history,” she added.

The MICC WeB educational programme has been implemented in Bosnia and Herzegovina, Croatia and Serbia since 2014. Operating at the intersection of transitional justice, historical human rights education and civic education, it has brought together more than 400 high school students and 80 teachers from more than 50 schools to discuss and hold simulations of war crime trials.

Acting in teams of prosecution, defence, judges and media in week-long MICCWeB sessions, students investigate their respective legal cases, enhance their understanding and knowledge of transitional justice and international criminal law, and build bonds between their communities.

The lesson plans created in cooperation with BIRN can be found on this link.