To many who trace their roots to socialist Yugoslavia, ‘Yugo-nostalgia’ isn’t just about how they or their families once lived, but about the life they want to live now.

Architect Mirza Vranjaković has two pictures on the wall of his office in the well-heeled Berlin district of Charlottenburg.

The other is a photograph of a uniformed and smoking Josip Broz Tito, the revolutionary and leader of socialist Yugoslavia from 1945 until his death in 1980. 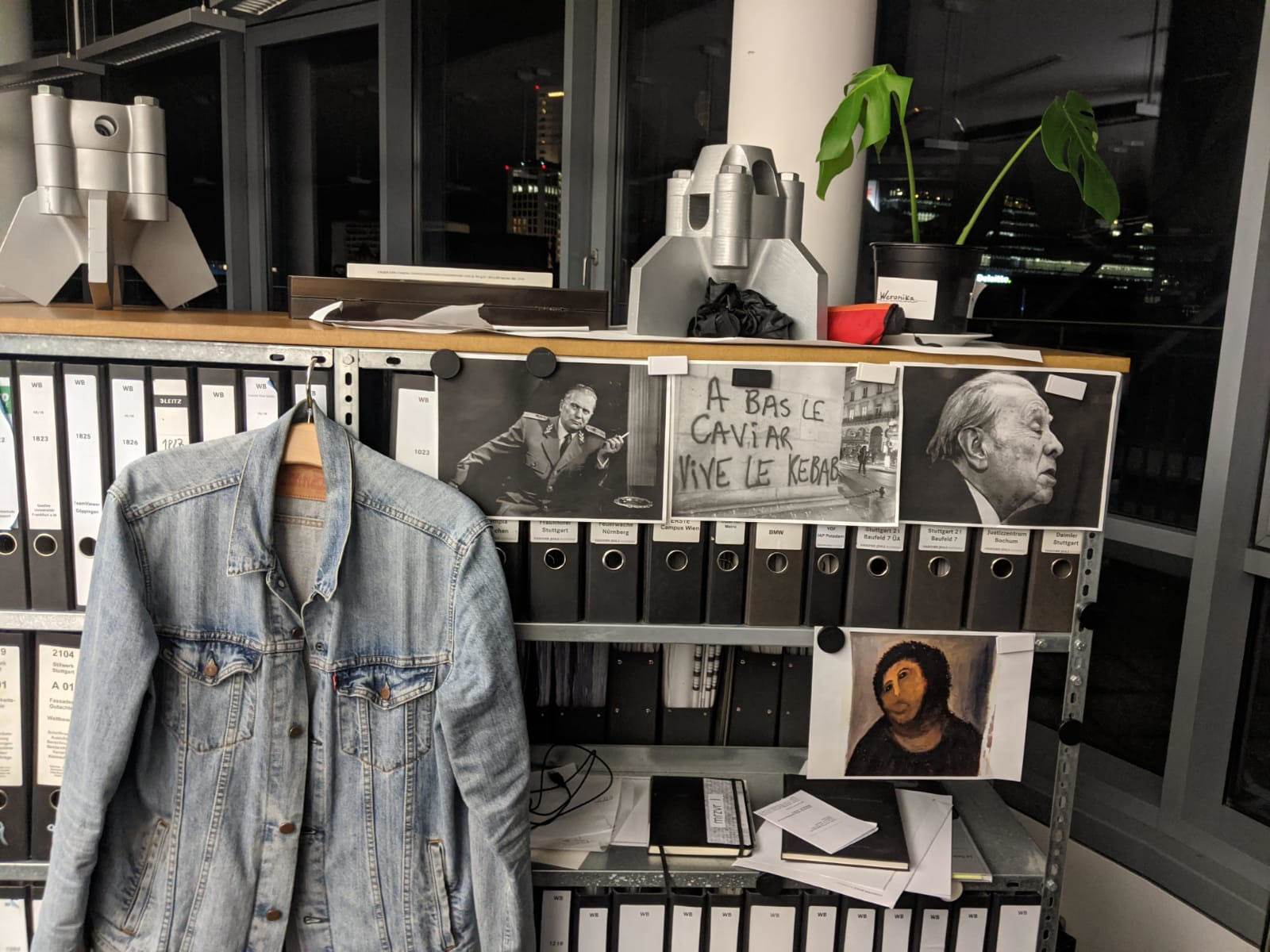 “Once, my boss entered the office and was visibly shocked to see Tito’s picture,” said Vranjkovic. “He asked, ‘You have a photo of a dictator?’ I replied, ‘Er bleibt’ – ‘He stays.’”

At 31, Vranjakovic has no direct memory of the Partisan resistance leader who forged a multiethnic socialist state from the ruins of World War Two and would walk the Cold War stage as co-founder of the Non-Aligned Movement.

Nor did the Yugoslavia Vranjakovic was born into in 1988 last more than a few more years before nationalism, economic crisis and the shifting sands of geopolitics each played a part in tearing it apart, killing roughly 125,000 people over the following decade and scattering hundreds of thousands more across the globe. 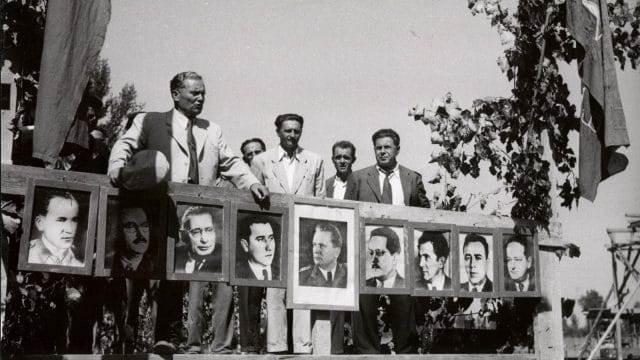 Tito at the youth railway Banja Luka-Doboj. Photo: Archive of the Museum of Yugoslavia

So why the picture of Tito?

“I wanted to show my ideological belonging,” said Vranjakovic, whose round glasses, beard and long brown hair are more Woodstock than Novi Pazar, the town in the southwest of former Yugoslav Serbia where he grew up.

“To me, this picture is important because I was born in Yugoslavia, in a system that represented an alternative to capitalism. Such a system doesn’t exist anymore, anywhere in the world,” he said.

To Vranjakovic’s German boss, Tito was a tin-pot dictator, but to Vranjakovic he was a symbol of a ‘golden era’ and for some ‘Yugoslavs’ like him in the West, of an imagined future.

Much more than a bittersweet longing for Yugoslav ‘Kras’ candy or fond memories of daytrips over the border to the Italian port of Trieste – ‘the West’ – to buy jeans, the somewhat clichéd concept of Yugo-nostalgia has morphed for some immigrants from the Balkans into a value-system for the present and the future.

Yugo-nostalgia as a ‘safe space’

Not everyone shares Vranjakovic’s view of what Tito’s Yugoslavia represented.

As the centrifugal forces of nationalism gathered pace in the 1980s, Tito came to be viewed by many in Yugoslavia as a ‘dictator’, his federal state a strait-jacket for peoples who, the argument goes, really just wanted to live apart. He ruled by decree and brooked little political dissent.

To a great many who look fondly on their former joint state, however, Tito was a visionary, a leader who preached ‘brotherhood and unity’ over differences of faith, ethnicity or language, who presided over the advancement of women’s rights, over architectural innovation and over a hybrid socialist system that afforded its citizens a degree of freedom denied to those behind the Iron Curtain. The Yugoslav passport opened doors East and West, and Tito was a rare kind of statesman. 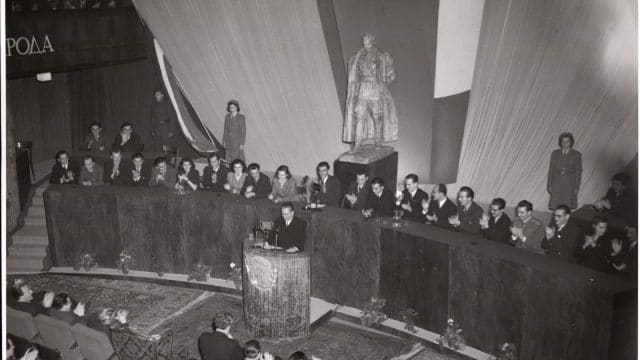 Tito speaking at the congress of Young Communist League of Yugoslavia. Photo: Archive of the Museum of Yugoslavia

“During that period, my hometown, and my region in Serbia, went through a serious emancipation,” said Vranjakovic. But by the 1990s it was the former view that had by and large taken hold in the newly independent states of ex-Yugoslavia.

Mass killings and ethnic cleansing poisoned relations between Serbs, Croats, Bosniaks and Albanians, and – according to numerous academic studies – the new interpretation of Yugoslavia took root too in the diaspora, already well-established by the exodus of hundreds of thousands of Yugoslav gasterbeiters from the 1960s onwards and swollen further by refugees who fled the wars.

The animosity spread to cities across the West where mini ‘Yugoslavias’ had emerged over decades in dense little pockets; these communities disintegrated almost overnight as ‘Yugoslav’ splintered into Serb, Croat, Bosniak.

Yet today, there are still some holdouts who cling to the Yugoslav identity as a signifier of their rejection of the forces that tore Yugoslavia apart, of hatred and the politics of intolerance.

“I consider myself a Yugoslav because I was born there and my parents raised me in that spirit,” said 40-year-old IT specialist Kemal Smajic, who as a 12-year-old boy arrived in the Austrian capital Vienna in 1992 as Bosnian Serb forces besieged his native Zvornik at the start of the war and drove out Muslim Bosniaks.

Despite the killings and the trauma, “I never hated Serbs,” said Smajic. “I only hated people who slaughtered others.”

Smajic now mixes in a social circle of dozens of people from across the former Yugoslavia.

“Together, we go on summer vacations, skiing… Last time, there were ten couples with children. There are doctors, pharmacists, electricians, bureaucrats, etc. We’re all mixed; people from Pirot [Serbia], Dalmatia [Croatia], Slavonia [Croatia], central Bosnia, Belgrade. When we get together, we have a blast.”

Instead of a painful, distorted picture of a country that became its own worst nightmare, for Smajić ‘Yugoslavia’ is a metaphor for his present.

Popović, who researches ‘Yugo-nostalgia’ at the University of Ljubljana and the Paris Institute of Political Studies [Sciences Po Paris], said that some of those who remember Yugoslavia “create a unique counter-narrative,” or what the German Egyptologist Jan Assmann would call ‘counter-identity’, in opposition to the new, prevailing narrative. 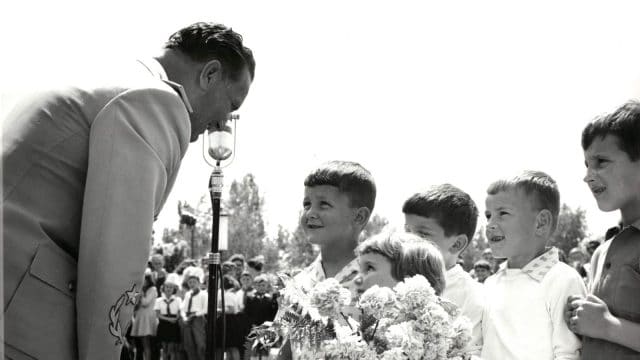 Tito receiving representatives of pioneer organisation from all parts of the country on the Youth Day in 1958. Photo: Archive of the Museum of Yugoslavia

“As a response to the hegemonic revisionism, memory of Yugoslavia becomes subversive,” Popovic said in written replies to BIRN.

“At the same time, on an individual level, Yugo-nostalgia becomes a sort of “safe space” for cognitive dissonance, ambivalent emotions and (un)successful attempts to understand everything that happened to us: personally, socially and politically.”

In Smajic’s Vienna, Dr Ana Mijic of the sociology department at the city’s public university, has reported finding “strong bonds between people from former Yugoslavia.”

In a 2019 paper, Mijic wrote that “interviewees frequently assert that their ethnic belonging – i.e. being a Bosniak, being a Croat, being a Serb – is widely insignificant in everyday life.”

“They state that there are strong bonds with people from the former Yugoslavia in general (‘sa našima’) that are distinct from bonds with ‘normal Austrians’, as a few interviewees describe, and that the ethnic affiliation of ‘our people’ is not of any importance.” That said, in other cases, primary social circles are ethnically largely homogeneous, Mijic wrote.

Jana Dolecki moved from the Croatian capital Zagreb to Vienna in 2013 to study for a PhD. Little did she know she would become the conductor of a local choir called ‘November 29’, celebrated in Yugoslavia as the date of the official declaration of the socialist federation in 1943. 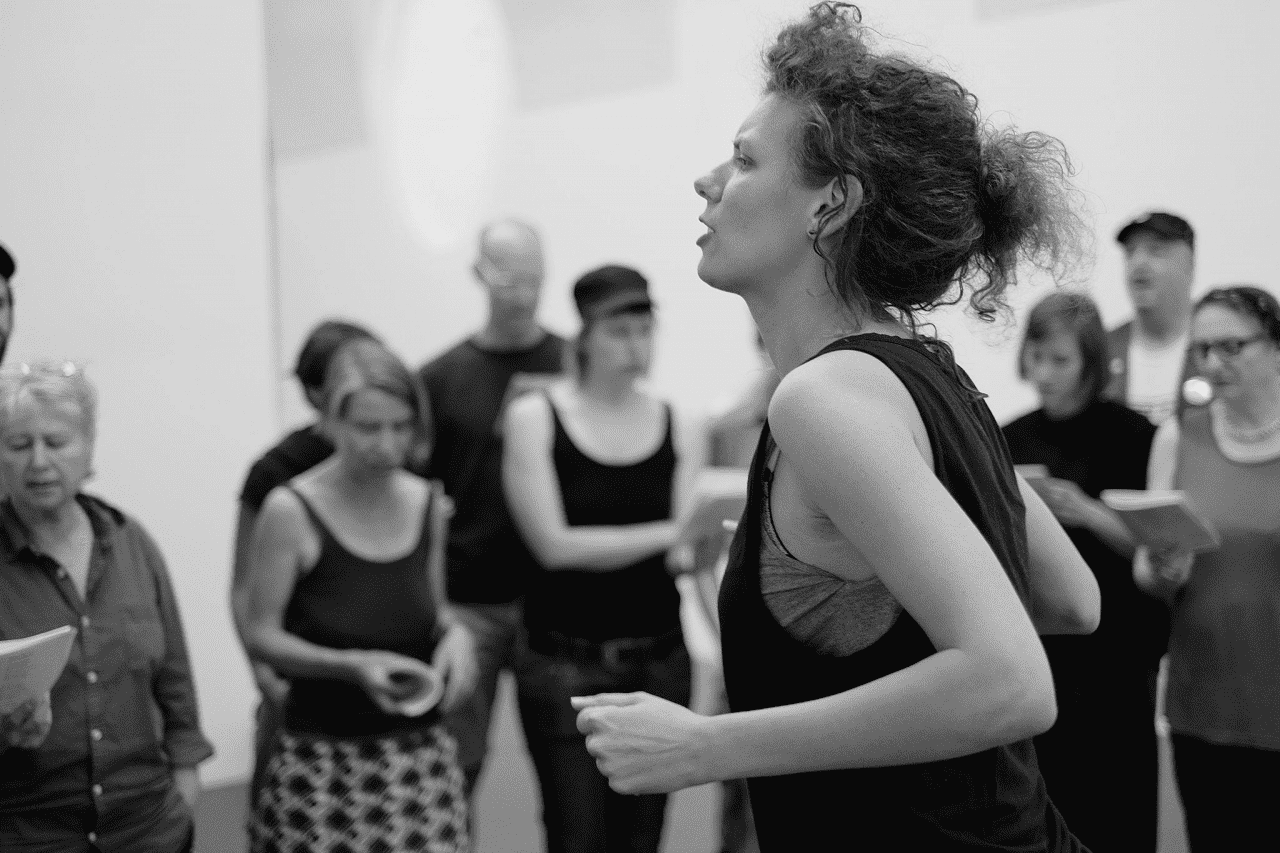 Established in 2010 by a group of artists from Serbia, Bosnia and Austria, the choir through its songs and performances “lives Yugoslavia,” said Dolecki, 40.

“They started to give life to that heritage, which gave them a political identity or substance that had been missing for them until that point,” Dolecki told BIRN “They realised that this heritage can, even today, become an active element.”

Dolecki said the choir’s participants – replete with the red star of Yugoslavia on their shirts – share the values of anti-fascism, solidarity and internationalism that were central to socialist Yugoslavia, and its doors were open not only to ‘Yugoslavs’.

“There are 20 of us from the ex-Yugoslav countries, plus a couple of Austrians, Swedes, Germans and the French. Our members are playing Partisan-inspired movies; we attend conferences and discuss how to continue ‘living’ the Yugoslav heritage, through song and activism,” she said.

“We are ‘living’ our ideal manifestation of Yugoslavia.”

At such cultural events, she said, “you have the opportunity to ‘live Yugoslavia’ in an objective way, without your identity being subjectively determined.”

Yugoslav appeal for young and marginalised

That younger generations might feel the pull of a ‘Yugoslav’ identity more strongly is not without precedent.

According to Popovic, in 1987 research conducted in Zagreb and Belgrade and cited by the scholar Sergej Flere in 1988, found that more than 16 per cent of people in Yugoslavia under the age of 30 identified as ‘Yugoslav’ in terms of nationality, while almost 40 per cent said the Yugoslav identity would be most acceptable to them. 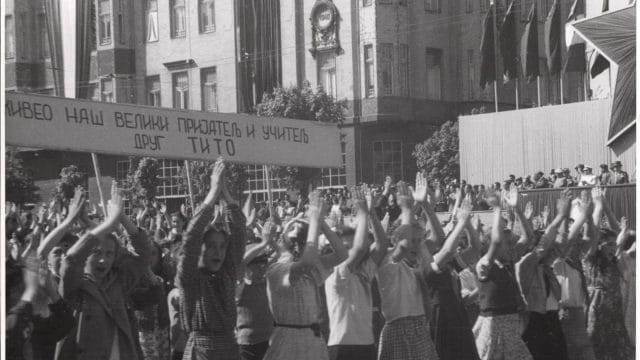 The celebration of the 1st of May in Belgrade 1949. Photo: Archive of the Museum of Yugoslavia

Popovic also cites later qualitative research such as that conducted by Eric Gordy, senior lecturer in Southeast European Politics at University College London, to suggest that the Yugoslav identity was most acceptable to “young, urban and educated population groups.”

While the dissolution of Yugoslavia left many feeling excluded, marginalised or discriminated against, ethnic minorities within the largely nationalistic states that emerged were doubly unlucky – deprived of the joint state they grew up in and viewed with suspicion in the new states that replaced it.

Some found solace in a minority nationalism. Others clung to their original Yugoslav identity as a type of ‘internationalism’ for the otherwise ‘unwanted’. 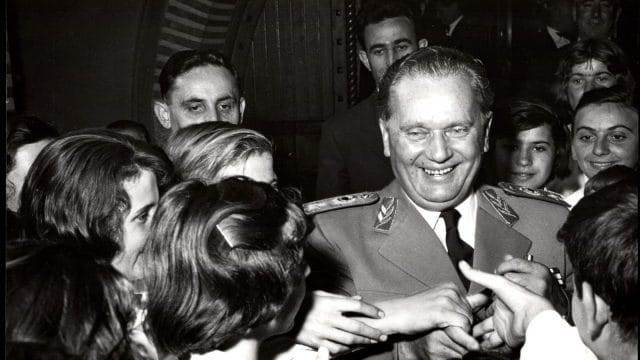 Tito with members of the pioneers choir on his birthday in 1957. Photo: Archive of the Museum of Yugoslavia

“The official state policies and media propaganda in the 90s was working around the clock to set the ethnic borders straight, labeling everyone according to their name and religion,” said Vranjakovic, who rejects such labels.

“It hasn’t changed much in recent years and everyone who feels like a minority and doesn’t like to be pigeon-holed felt safe under the identity of Yugoslavian, which still evokes the ideas of anti-fascism, brotherhood and unity.”

And is it easier to embrace this ‘new old’ identity in Berlin or Vienna than in Belgrade or Zagreb?

“An open-minded person finds it easier to approach other people here then for a person who lives in Serbia, Bosnia or Croatia, where the nationalist currents are blatantly repressive,” said the Vienna IT specialist Smajic.

“In those countries, they need to be careful with their words, in order to protect their work position or their kids in school. It seems that it’s easier for those who live abroad and are open-minded.” 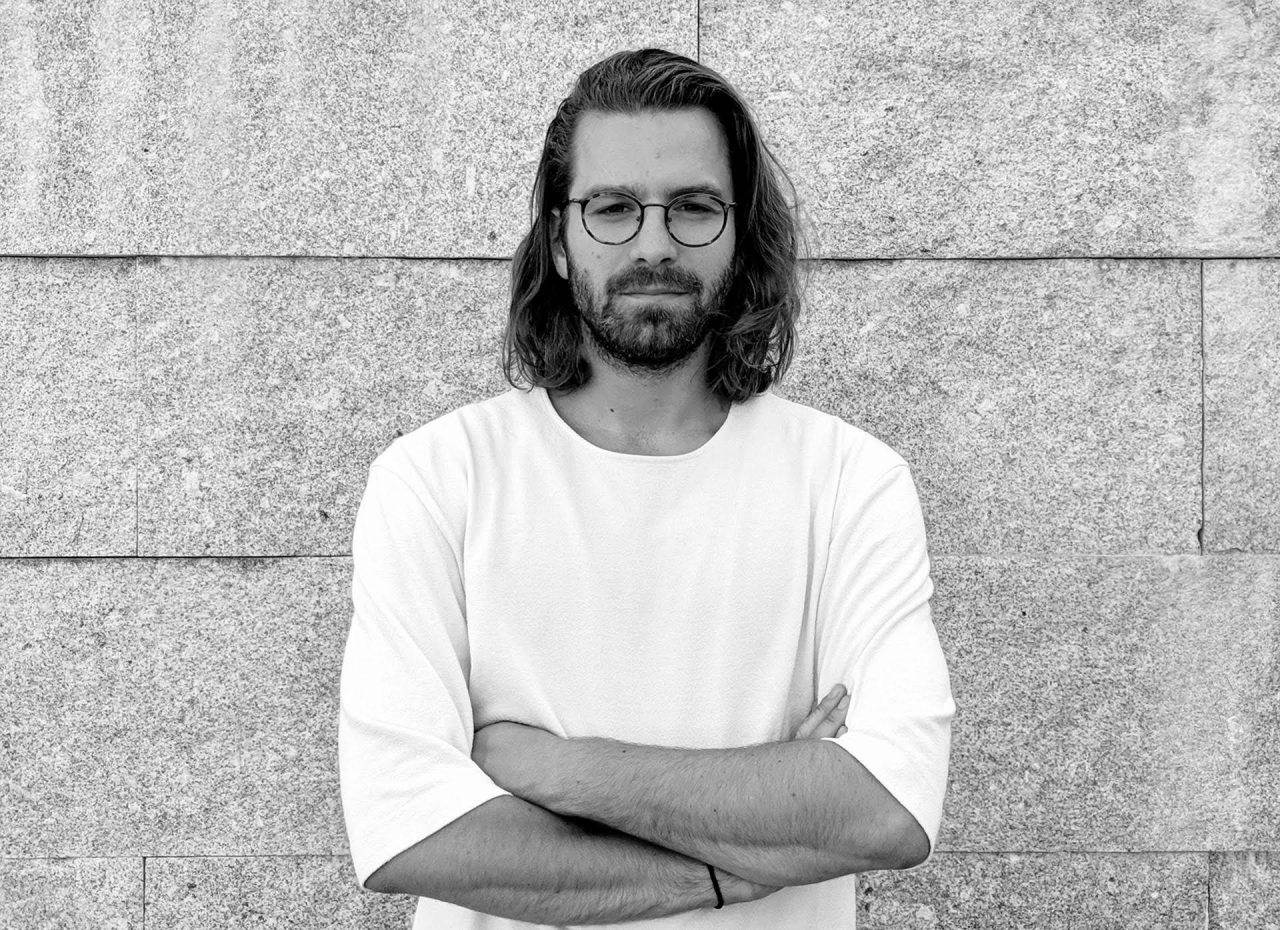 Vranjakovic described his own identity as “complex”.

“I come from Novi Pazar, Serbia – a place that didn’t completely accept me as a citizen,” he said. “The only flag that would make me feel comfortable and ‘at home’ is the flag of Yugoslavia.”

Filip Balunovic is a PhD candidate at the Italian University, Scuola Normale Superiore, at the Department of Political Science and Sociology. His research interests include political economy, social movements, Marxism, political philosophy and political theory. He graduated from the Faculty of Political Science in Belgrade and received two masters’ from the European Institute in Nice, France and the Universities of Sarajevo and Bologna. Balunovic is the executive editor of the Serbian edition of Le Monde Diplomatique and author of the book “Freedom Notebooks” (Mediteran, 2014) (Serbian “Beleske sa slobode”).

The opinions expressed in this article are those of the authors only and do not necessarily reflect the views of BIRN.

This article has been produced as part of the Resonant Voices Initiative in the EU, funded by the European Union’s Internal Security Fund – Police. The content of this story is the sole responsibility of BIRN. The European Commission does not accept any responsibility for use that may be made of the information it contains.