In Bosnia, former foes are trying to stop their own past from poisoning the future.

Twenty-eight years ago, early in the war in Bosnia and Herzegovina, 114 Bosniak and Croat residents of the southern town of Mostar were rounded up by Serb paramilitaries and soldiers of the Serb-dominated Yugoslav Army and taken to a nearby barracks known as Sjeverni Logor.

Beaten, tortured and executed, their bodies were tossed into rubbish dumps at two locations in the town. Believed to be the first mass atrocity of the war in the historical Herzegovina region in the south of the country, it was by no means the last.

In 2017, veterans of the 1992-95 war from each of the warring parties visited the barracks to pay their respects.

Among them was Stanislav Krezic, a 60-year-old Bosnian Croat veteran and member of the Belgrade and Sarajevo-based Centre for Nonviolent Action, CNA, a non-governmental organisation dedicated to reconciliation and peace-building in the former Yugoslavia.

“I was a hardliner, eager for revenge,” Krezic said of his younger self during and immediately after the war. But through the CNA “I freed myself of nationalism.”

That day in Mostar, Krezic recalled a young man approaching the memorial event and saying, “They are my enemies”.

According to Krezic, the veterans replied, “Why are we your enemies? I fought in the war against your father, not you. My child is not at war with you.” 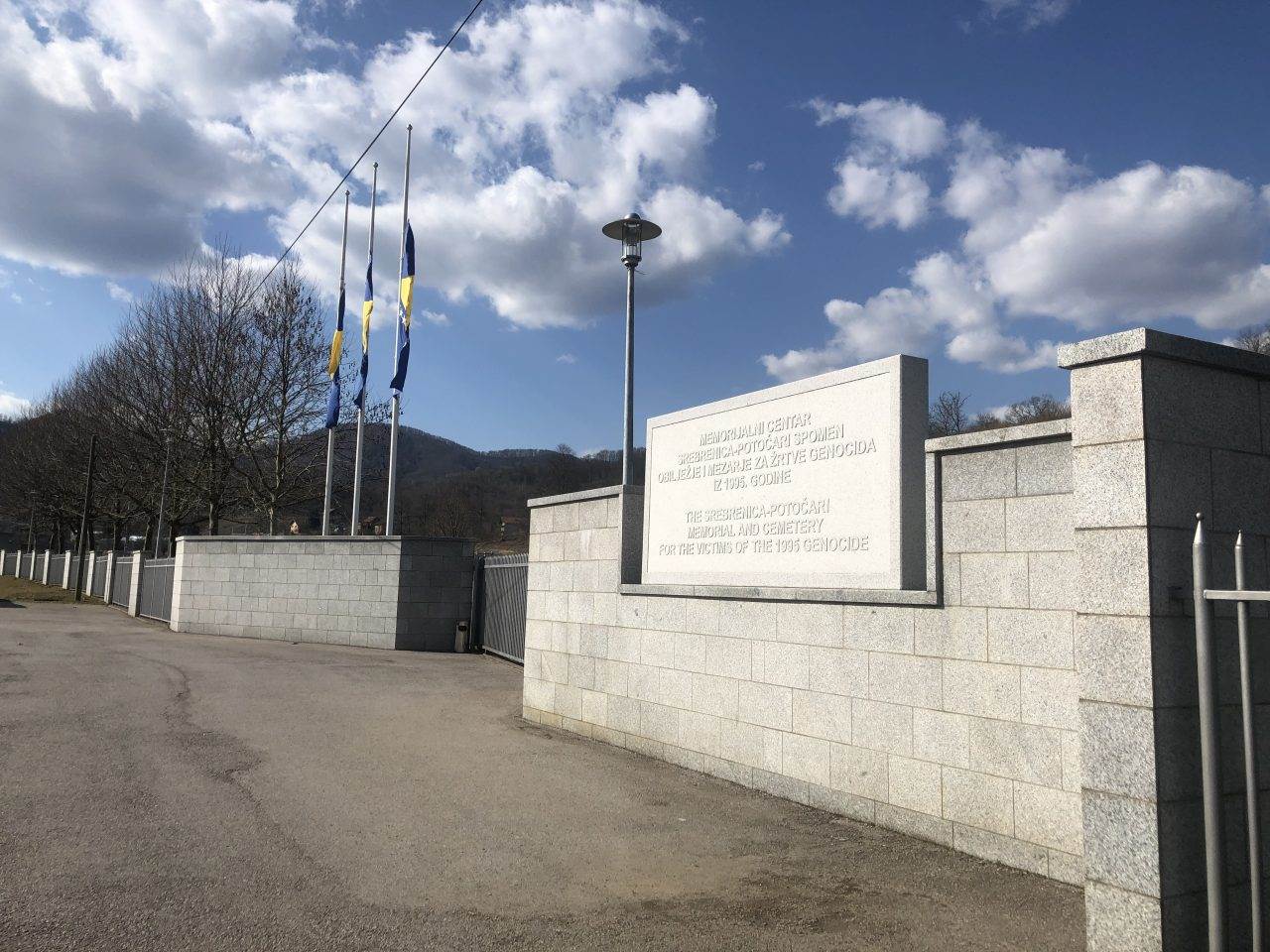 Twenty-five years since Srebrenica, when some 8,000 Muslim men and boys were killed by Bosnian Serb forces in the worst mass killing in Europe since World War Two, ethno-nationalist divisions and discourses continue to dominate Bosnia, even among younger generations that have no direct memory of the conflict.

Many post-war children have adopted the trauma of their parents and internalised ethno-nationalist discourses via family upbringing.

But there are pockets of resistance.

Facing the crimes of one’s own community

A picture hangs on the wall of the CNA’s Sarajevo office featuring Krezic and two of his closest friends – 47-year-old Bosniak Amer Delic and 50-year-old Serb Djoko Pupcevic, also members of the CNA.

Twenty-five years ago they were sworn enemies, fighting each other in a war that killed roughly 100,000 people.

Krezic, Pupcevic and Delic say that their experience with CNA, during which they share their own stories with other veterans, has dramatically changed their attitude towards the ‘Other’. 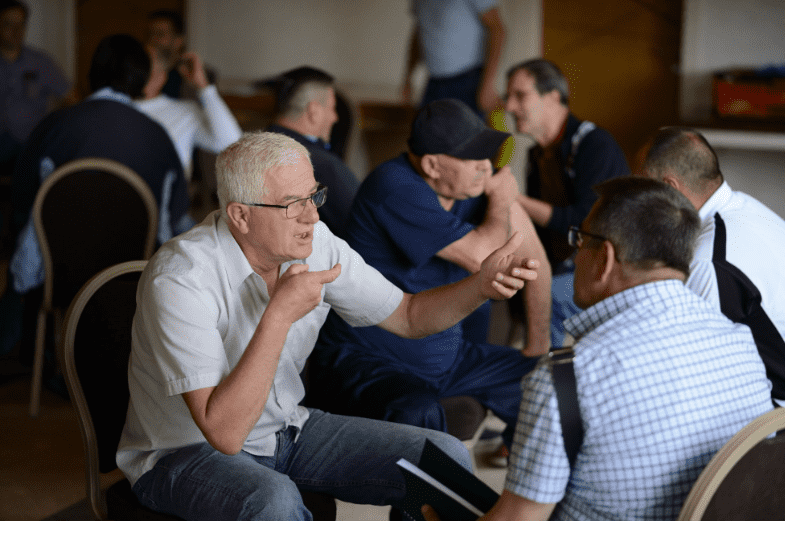 CNA training with war veterans in dealing with the past; photo: CNA

“The face of the enemy looks different from this angle,” said Delic.

Like other facets of the contemporary post-war social and political landscape, memory culture and the building of memorials in Bosnia has become politicised and split along ethnic lines.

As BIRN reported previously, war memorials tend to “commemorate victims from the dominant ethnic group” in the territories where the memorials are located. Such memorials not only reflect but strengthen existing divisions through a distortive and biased culture of remembrance. And this can impact generations to come.

The CNA seeks to challenge divisive narratives by organising memorial visits by veterans from all sides, promoting the use of joint memorials and by marking otherwise unmarked sites of suffering. 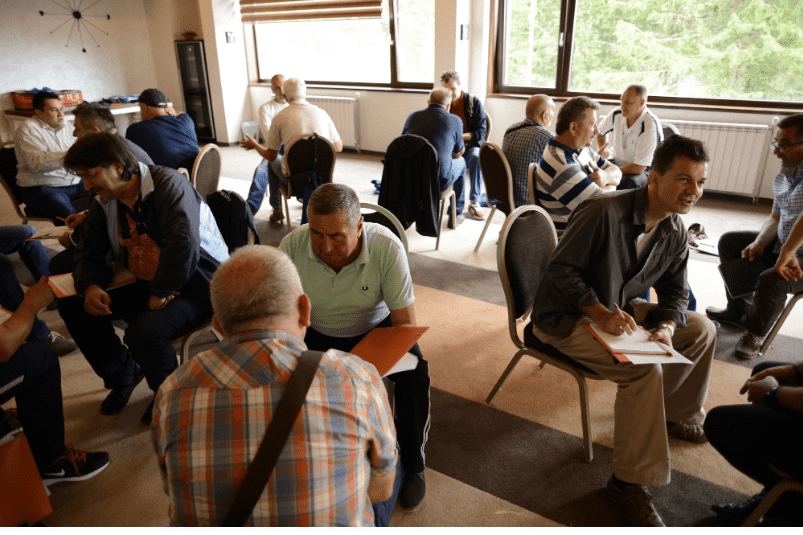 “I found out many facts about the suffering of others,” Pupcevic said of memorial visits he had taken part in to Srebrenica and other towns devastated by the war.

“If one does not see these things, one does not know. If I stayed in my silence, my home, I would not have seen anything… would have not known about the victims,” he said. “I would have been glorifying my victims only, while playing down the others.”

Commemoration in Ahmići, “When Ahmići and Trusina meet”, photo: CNA

At a memorial visit in 2019 to Ahmici, where 116 Bosniaks were killed in 1993 by Croat fighters, Krezic, the Croat, turned to those in attendance and said, “The power is in us, who visit these places where our own committed atrocities.”

The trio regularly speaks about their process of “transformation” during public events or peacebuilding course for young Bosnians or veterans.

But theirs is an uphill struggle.

“Politics is producing a lot of negative tensions, for my generation and generations to come,” said Delic.

Ethno-nationalism, he continued “is being nurtured both in families and educational institutions,” by subordinating younger Bosnians to their ethnic group and depriving them of a relationship with those of other ethnicities.

Burden of the past
According to Krezic, family environments play an important role in shaping the worldviews of young people, as the war trauma and sometimes radical views of the parents influence how children perceive themselves, their lives, friendships and future aspirations.

Delic said that many of the post-war generations have little interest in peacebuilding and reconciliation programmes, seeing the war as “a burden” and preferring to look to the future.

But that does not mean they are not themselves burdened by the past; on the contrary, younger generations are unwilling or unable to confront the dominant ethno-nationalist narratives of today.

Before the war, when Bosnia was part of the socialist Yugoslav federation, Bosnians of different ethnicities mixed far more, socialising and in many cases marrying across ethnic lines. Today’s Bosnia is different.

Atrocities and ethnic cleansing dramatically altered the demographic composition of Bosnia and shaped most of today’s ethnically homogenous communities.

Members of the post-war generation are more often than not embedded in their own communities, which shape their identity, narratives and daily interactions.

The ‘Others’ are usually not part of their universe. They are excluded, ignored or disdained.

Indeed, ethnicity is enshrined in the Bosnian Constitution and, to a degree, still dominates much of public life, a fact not lost on politicians who stoke divisions along ethnic lines to bolster their own positions. 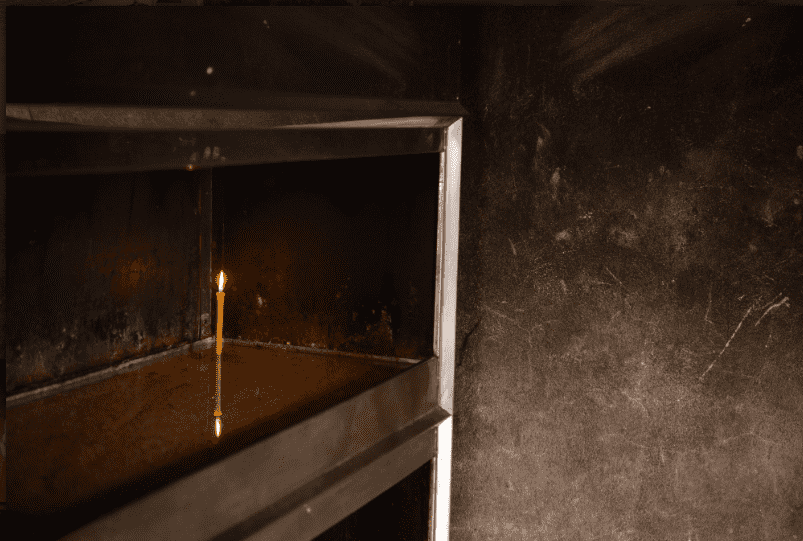 A candle of humanity and hope during a visit to Prijedor and Novi Grad, photo: CNA

Each ethnic group has its own memory of the war, its own version of history, of what happened and why. And these opposing histories dominate the stories told to post-war generations inside their families, in schools and in the media.

They are what the Turkish-Cypriot psychiatrist Vamik Volkan calls collective ‘chosen trauma’ narratives.

Chosen traumas can feed radicalisation. When activated, they revive “fears, expectations, fantasies and defences associated [with the past],” Volkan writes.

“This process magnifies the image of current enemies and current conflicts, and an event that occurred [in the past] will be felt as if it happened yesterday. An ancient enemy will be perceived in a new enemy and the sense of entitlement to regain what was lost or to seek revenge […] becomes exaggerated.”

The ‘others’ are blamed for the suffering of one’s own group while the wrongdoing of that group is more often than not denied, relativised or silenced.  And chosen traumas cross generations.

Recent studies conducted in other post-war settings confirmed profound effects of mass violence not only on individuals who experienced the violence first hand, but also on their offspring, who are on a daily basis confronted with contemporary legacies of past atrocities in their families and communities. Bosnia is no different.

In Bosnia, a relative lack of inter-ethnic encounters and inter-ethnic communication about the war intersect to create a ‘conspiracy of silence’ in which the post-war generations have been growing up.

This inter-ethnic conspiracy of silence can (re)produce the fear of ‘the unknown’ and fuel xenophobic perceptions about the ‘other’ among post-war generations.

Coming to terms
Not all Bosnians born during or since the war, however, succumb to ethno-nationalist narratives. Some recognise the threat, thanks, in part, to the way they were brought up.

Nermin, a 61-year-old Bosniak war veteran, who spoke on condition his real name not be published, recalled being drafted into the Bosnian army and the struggle his wife and their first child had to make sure they had enough food and water. Nermin was left unemployed after the war, the family condemned to poverty.

In 1997, Nermin found work in security and a second child, a daughter, was born. The daughter, Elma [also not her real name], was raised in the same way Nermin said that he himself was raised.

“Our upbringing was ‘brotherhood and unity’,” he said, recalling the guiding principle of ethnically mixed Yugoslavia under Josip Broz Tito.

“I did not care who you are, what’s your name.”

Elma’s parents nurtured a strong sense of independence within their children. When Nermin and his daughter talk of the war, it is not of ethnicity, polarisation or enemies but of specific events and the impact on the family itself.

Nermin declares himself a Bosniak and a Muslim, but his children have the freedom to choose, he said. Elma said she feels neither Bosniak nor Muslim; like her parents, she has a mix of friends from all three main ethnic and religious groups in Bosnia.

“My interaction with various narratives, including far-right, gave me insights into colourful but also destructive perspectives on the war past and the ethno-nationalism of my broken generation,” said Elma.

“I do not want to be exclusive when it comes to the ethnic groups,” she said, “but ethnic groups will have to come to terms [with their own war legacies and ethno-nationalism]. If not, there is no reconciliation.”

Her words echoed those of Delic. “If one recognises my sacrifice, if one has empathy for these people who were [killed] on my side, it is a humane [act]. Nothing is black and white. I know others had victims too.”

“If we are ready to talk with our enemies, why the young cannot do the same?”

Mirza Buljubasic is Assistant of Criminology at the Faculty of Criminal Justice, Criminology and Security Studies at the University of Sarajevo. He worked as a research consultant, researcher and analyst at various organisations that deal with topics such as transitional justice, radicalisation and women’s empowerment.

Barbora Hola works as a Senior Researcher at the NSCR and as Associate Professor at the Department of Criminal Law and Criminology at VU University of Amsterdam. Barbora is also a co-director of the Center for International Criminal Justice, a knowledge centre dedicated to interdisciplinary studies of mass atrocity crimes and international criminal justice.

This article has been produced as part of the Resonant Voices Initiative in the EU, funded by the European Union’s Internal Security Fund – Police. The content of this story is the sole responsibility of BIRN. The European Commission does not accept any responsibility for use that may be made of the information it contains.