A woman in her mid 60s and a six-year-old child killed when a gas canister used for cooking exploded; three men dead within a matter of days apparently from carbon monoxide poisoning caused by a makeshift heating system.

Five tragedies, one scene: the Moria refugee camp on the Greek island of Lesbos.

The victims were among thousands of people stranded on the ‘hotspot’ Greek islands of Lesbos, Samos, Chios, Leros and Kos during the first winter after the signing of a landmark deal between the European Union and Turkey in March 2016 to stem the flow of asylum seekers from the Middle East, Asia and Africa trying to reach the shores of the bloc.

This was the backdrop to the start of a contract in January 2017 between the EU and US consultancy giant McKinsey to eliminate the “backlog” of asylum requests.

A joint investigation by the Balkan Investigative Reporting Network, BIRN, and DER SPIEGEL has revealed how McKinsey, in the months before the January contract, had drafted proposals free of charge for the implementation of the refugee pact with Turkey, how these proposals were incorporated into European policy and how the EU finally – without a public tender procedure – awarded the consultancy a contract worth 992,000 euros to implement the policy. The European Court of Auditors concluded in 2018 that the contract was “irregular”.

Now, hundreds of pages of McKinsey’s reports on the work, obtained by BIRN and DER SPIEGEL, shed light on the detail of the consultancy’s service, revealing a logic more tailored to the boardroom than to humanitarian fieldwork.

The guiding principle of the management consultants, who worked with the EU’s European Asylum Support Office, EASO, the Greek authorities and the EU border management agency Frontex, can be summed up in one phrase: ‘maximising productivity’ – to process as many asylum cases in as short a time as possible. Rights groups and former insiders say this came at the cost of refugee rights.

“Efficiency cannot be easily reconciled with safeguarding asylum seekers’ right to asylum and access to fair procedures, especially due to the huge gap in the provision of information and legal aid to asylum seekers,” said Asterios Kanavos, a lawyer with the NGO Refugee Support Aegean and a former EASO caseworker on Lesbos in 2018 and 2019. 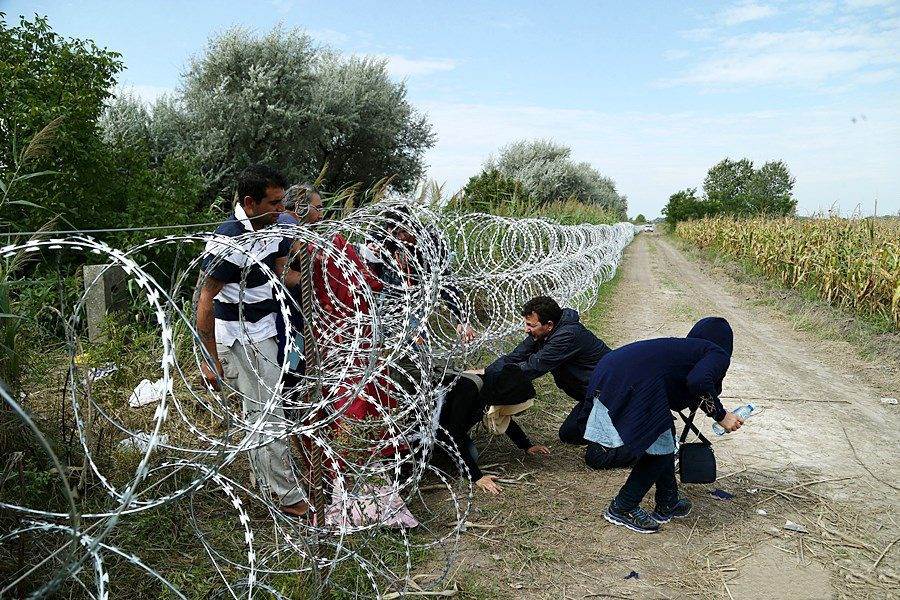 McKinsey proposed a number of measures to achieve its goal.

Some were obvious, such as the need to count how many asylum seekers were actually on the islands and improve how accommodation is allocated.

Some, however, were more controversial: ‘segmentation’, for example – the allocation of asylum cases according to nationality.

Human rights organisations warned Greek and European officials against discrimination, and pointed to tensions between different groups arising from frustration among members of certain nationalities over the months they were made to wait.

McKinsey called for the number of personnel to be increased as soon as possible. In a meeting with Maarten Verwey, the EU’s coordinator for the EU-Turkey deal, the consultants said that one way to do this would be to shorten the time staff spent in training before being deployed to the Aegean islands.

Another way to improve efficiency would be to ease the workload, i.e. by “minimising the number of cases going to the first and the second instance”. That meant discouraging people from even applying or, if they had already, from appealing when they were rejected.

The consultants proposed that Greek authorities and the officers of the International Organisation for Migration, IOM, should engage in “proactive information provision” about the prospects of an appeal being approved and about the IOM’s ‘voluntary return’ scheme. Such communication could take place as soon as the asylum seekers arrived in Greece, they said, i.e. at the end of a dangerous journey by often overcrowded boat across the Aegean. 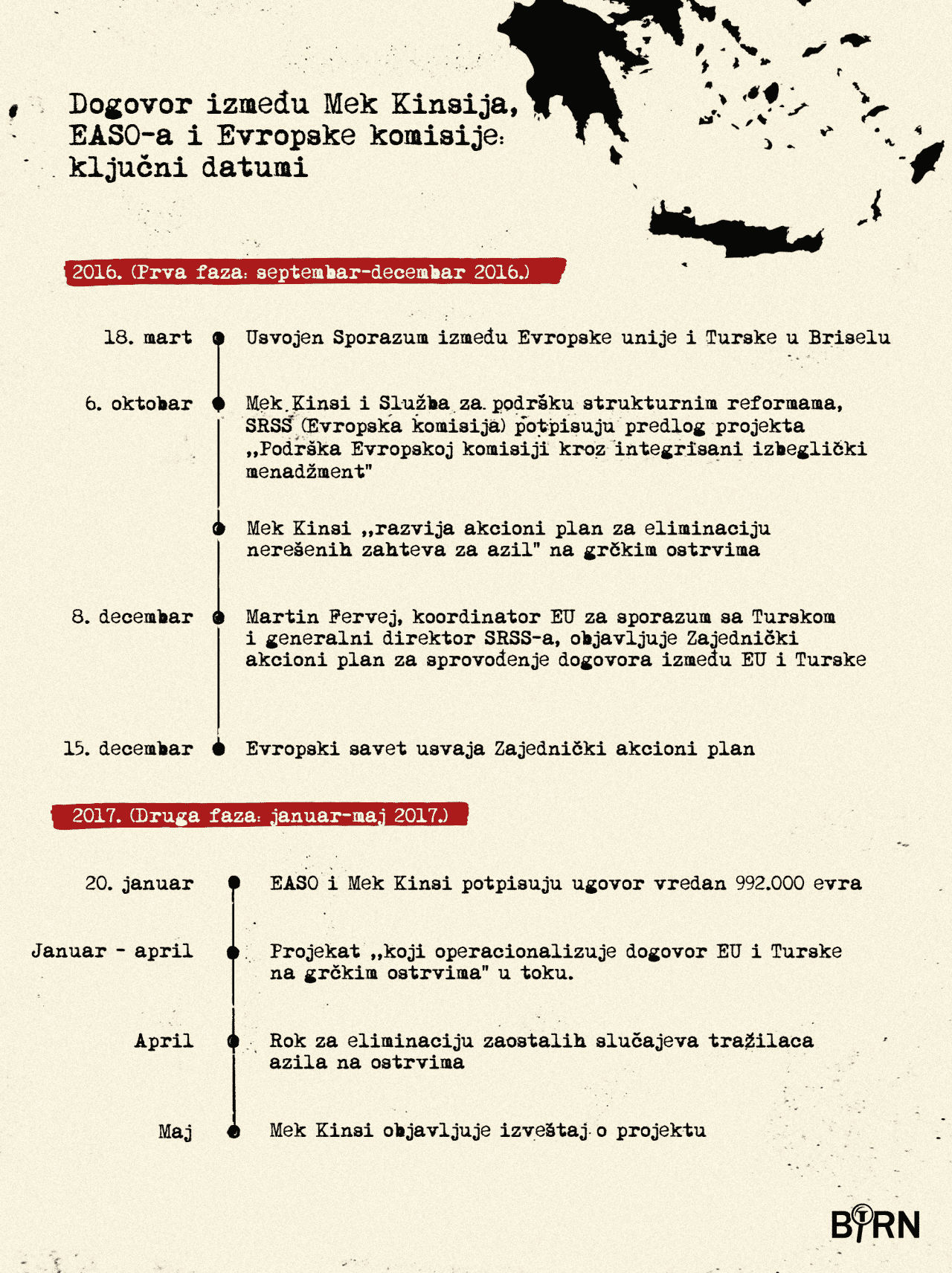 Despite their best efforts, results in February 2017 were clearly not satisfactory.

The “current productivity” of EASO and Greek Asylum Service staff was well below target, McKinsey said at the time. On average, the Appeals Authority in Greece was making 50 appeals decisions per week instead of the target of 300, according to the McKinsey report. To change this, the consultancy called for weekly telephone calls with the coordinators of the EASO and Greece Asylum Service on the islands. In addition, “performance” dashboards would be used to motivate employees.

On occasion, protests in the island camps would lead to staff evacuations, causing further delays to asylum procedures. So McKinsey urged the deployment of additional security forces in order to “reduce downtime”.

Capacity for detention pending deportation should also be expanded, it said, and suggested that migrants should be detained immediately after being informed they would be deported. The guidelines of the UN Refugee Agency, which the EASO itself cites, however, provide for detention only as an extreme measure.

Some asylum seekers have, over time, been granted permission to leave the islands, either because their asylum requests have been approved or they are deemed ‘vulnerable’. Some, however, refused to be transferred to camps on the Greek mainland because they felt that conditions there were worse than on the islands.

In March 2017, McKinsey wanted to counteract this “lack of will” and proposed a sanction mechanism to the UN Refugee Agency that would “make staying in the hotspots less attractive”. One of the proposed measures: make the cash cards, which give asylum seekers access to a monthly EU grant of 90 euros, functional only on the mainland.

As late as December 2016, human rights organisations were criticising the fact that those in the island camps were insufficiently informed about asylum procedures.

Many details still under wraps

McKinsey did not comment, when requested, on the individual measures proposed by the company in the course of its activities.

“As the EU Commission has confirmed, McKinsey did not decide public policy or assess the merits of claims,” said a company spokeswoman.

“Our role, as documented, was to provide operational data and advice to authorities to inform their decisions. This meant that cases of asylum seekers were processed quicker and heard sooner, which provided clarity about who had a right to remain in the EU.”

It is unclear to what extent the measures proposed by McKinsey have been implemented.

Many details of McKinsey’s activities are still under wraps today. The European Commission, the executive arm of the EU, justifies this on the grounds that full disclosure would pose a risk to public security and “undermine the protection of commercial interests of McKinsey”.

An EASO spokesman said that “efficient asylum procedures do not equate to a deterioration of quality and individual assessment of applications. All are important elements of the Common European Asylum System, wherein not only does an applicant have the right to have one’s application reviewed on its individual merits, but also within a reasonable time frame.”

The agency did not comment on the individual measures proposed by McKinsey. The company had not submitted the proposals to EASO, but rather to the Steering Committee that led the project, the EASO spokesman said. Even though EASO was a member of this committee, which no longer exists today, it could not speak on its behalf or that of its members.

Besides the EASO, the Steering Committee included the EU’s Structural Reform Support Service, SRSS, the EU border management agency Frontex, Greek authorities and McKinsey itself. The EASO spokesman suggested asking the European Commission, the EU’s executive arm, about how the consultancy’s proposals were followed up.

The Commission and EU authorities acted only in a supporting role, she said, and suggested any queries regarding individual measures proposed by McKinsey should be put to Greek authorities. The Greek asylum agency, however, did not respond to an email seeking comment. 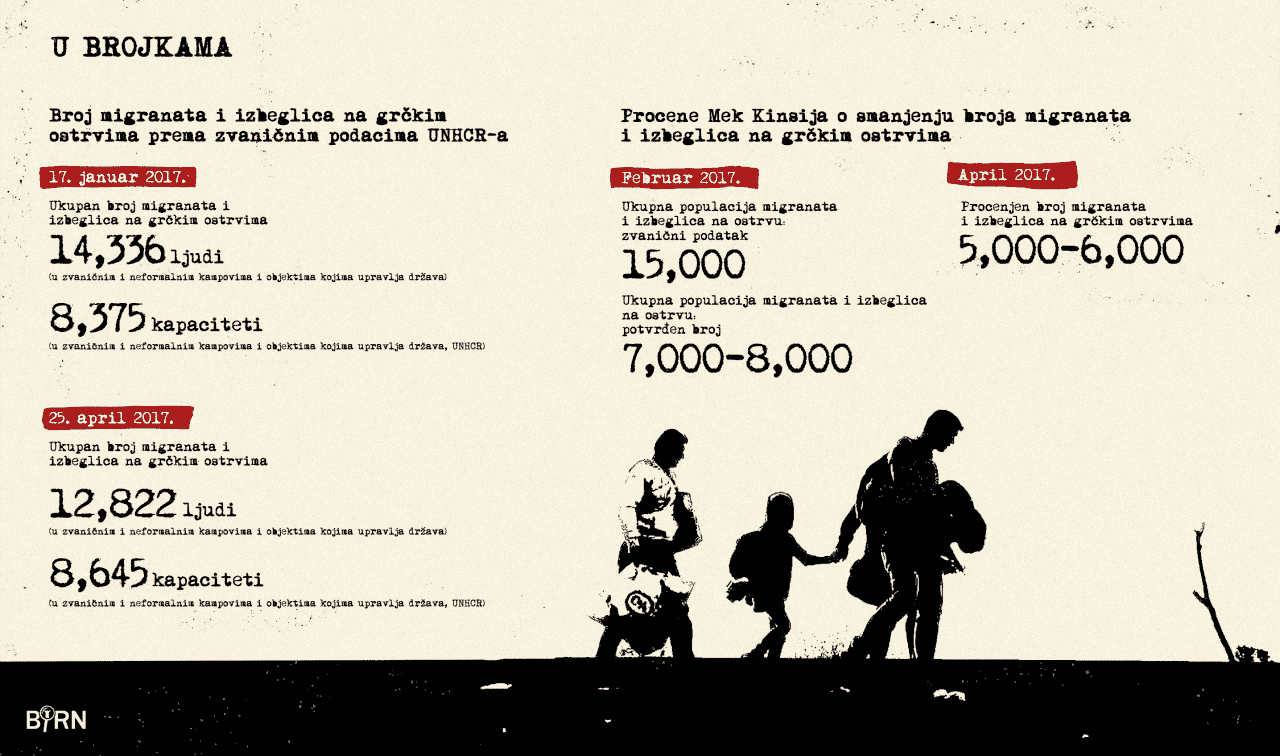 The emphasis placed on efficiency and “productivity” in European refugee policy outlived McKinsey’s involvement, to the concern of rights groups and some of those working on the ground.

“As I understood it, effectiveness was the most important aspect of the case-worker’s job,” said Kanavos. “In a procedure where fast decisions is a priority procedural guarantees and safeguards of asylum seekers’ rights come second”.

According to Kanavos, new asylum laws adopted by Greece this year include a number of provisions similar to those previously proposed by McKinsey; one such provision means the immediate referral of rejected asylum seekers in the first instance for deportation, and their automatic detention until the deportation takes place.

Greece’s turnover of asylum applications is significantly up, but at what cost?

“The new Greek asylum system is designed to deport people rather than offer them safety and protection,” Oxfam and the Greek Council for Refugees said in a report published on July 1.

Last November, the office of the EU Ombudsman told the Commission that more details of McKinsey’s role should be made public, arguing the public had the right to be informed about the contents of projects financed with public money.

The head of the Berlin-based European Stability Initiative think-tank, Gerald Knaus, whose ideas provided the basis for the EU-Turkey deal, questioned the need for confidentiality: “Why was the McKinsey analysis confidential? What was supposed to be hidden from the public here?” he told DER SPIEGEL/BIRN.

In spring 2017, he said, there were fewer than 6,000 asylum seekers on the Greek islands. There would also have been enough EU money to provide humanitarian shelter. “Where did it [the money] go?” Knaus asked.

“The problem on the islands was not the lack of resources, but the political will.”