In closed messaging groups and through small-scale concerts, the Croatian branch of Blood and Honour is networking with other neo-Nazis in Europe.

Patrik denies being a member of Blood and Honour, but the symbols he displays on his clothes show he shares its neo-Nazi principles.

Blood and Honour has been banned in Germany and Spain and declared a terrorist organisation in Canada, but that does not stop Patrik from proudly sporting a hoodie bearing its name at a café in the northern Croatian port city of Rijeka.

“I look at it as a kind of patriotism,” Patrik told BIRN. “I see it more as some kind of provocation,” and an expression of opposition to communism. “I would like to be a policeman,” he said.

Despite denying he is a member, Patrik is one of four men in Croatia that BIRN has been able to link to the Croatian branch of Blood and Honour, banned in Germany as a “neo-Nazi, racist and xenophobic organisation whose purpose is similar to that of National Socialism.” In Britain, its members are prohibited from joining the police. 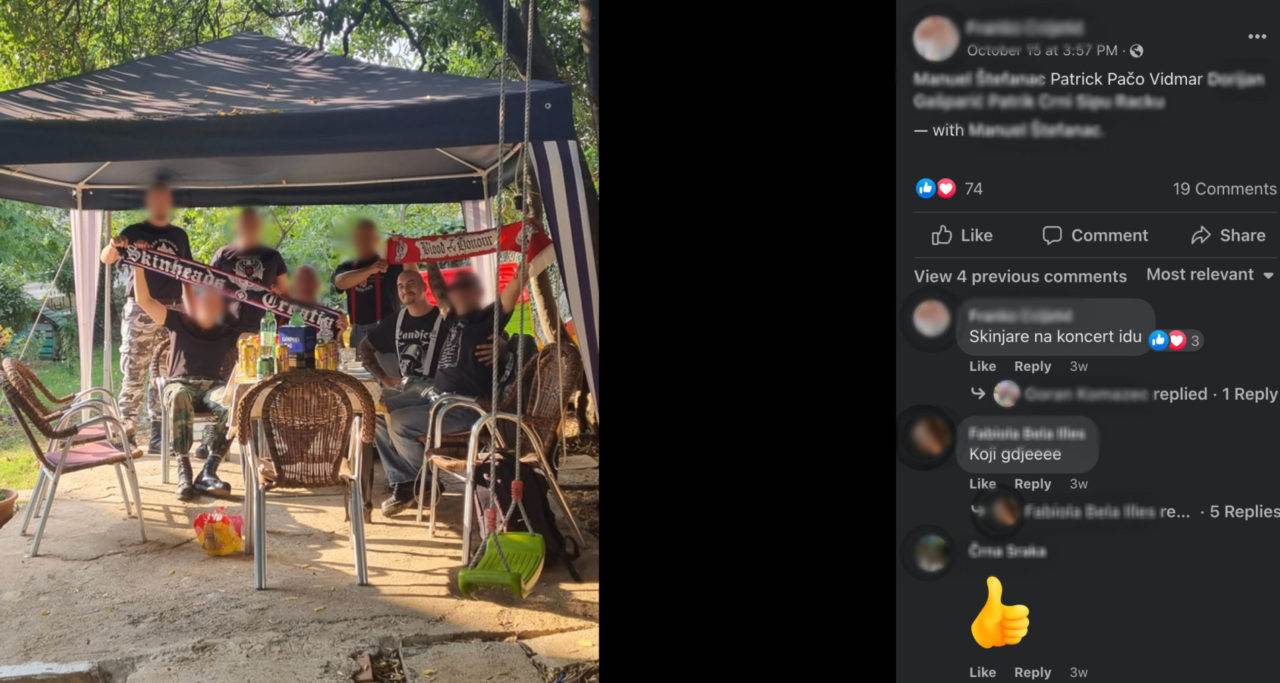 The organisation meets in secrecy, nurturing ties with affiliates in other countries and discussing ideology behind hidden profiles on social media and closed channels on messaging apps. They call for a “clean Croatia” and promote hatred towards migrants.

But this summer, two men, visitors to Rijeka, briefly lifted the veil of secrecy when they posed for a photo on Kantrida beach, bare-chested and showing off tattoos of swastikas, the SS Totenkopf death head and, on one of the men, the face of Adolf Hitler.

Anti-fascist activists identified one of the men as a guitarist affiliated with the Hungarian branch of Blood and Honour, and in doing so managed to name a member of the Croatian branch too.

Now BIRN has identified the other tattooed man – also Hungarian – and two other supporters of Croatian branch. They were spotted in Rijeka just days after a neo-Nazi concert dedicated to the “awakening of Europe.” BIRN was unable to contact either of the Hungarian men for comment.

“It is very logical that in Hungary or Croatia, where there are few foreigners, there is an extreme-right narrative according to which there is a threat from hordes of foreigners, feminists and LGBTs who will take away the tradition and culture,” said Alexander Ritzmann, senior adviser at the New York-based Counter Extremism Project, CEP. 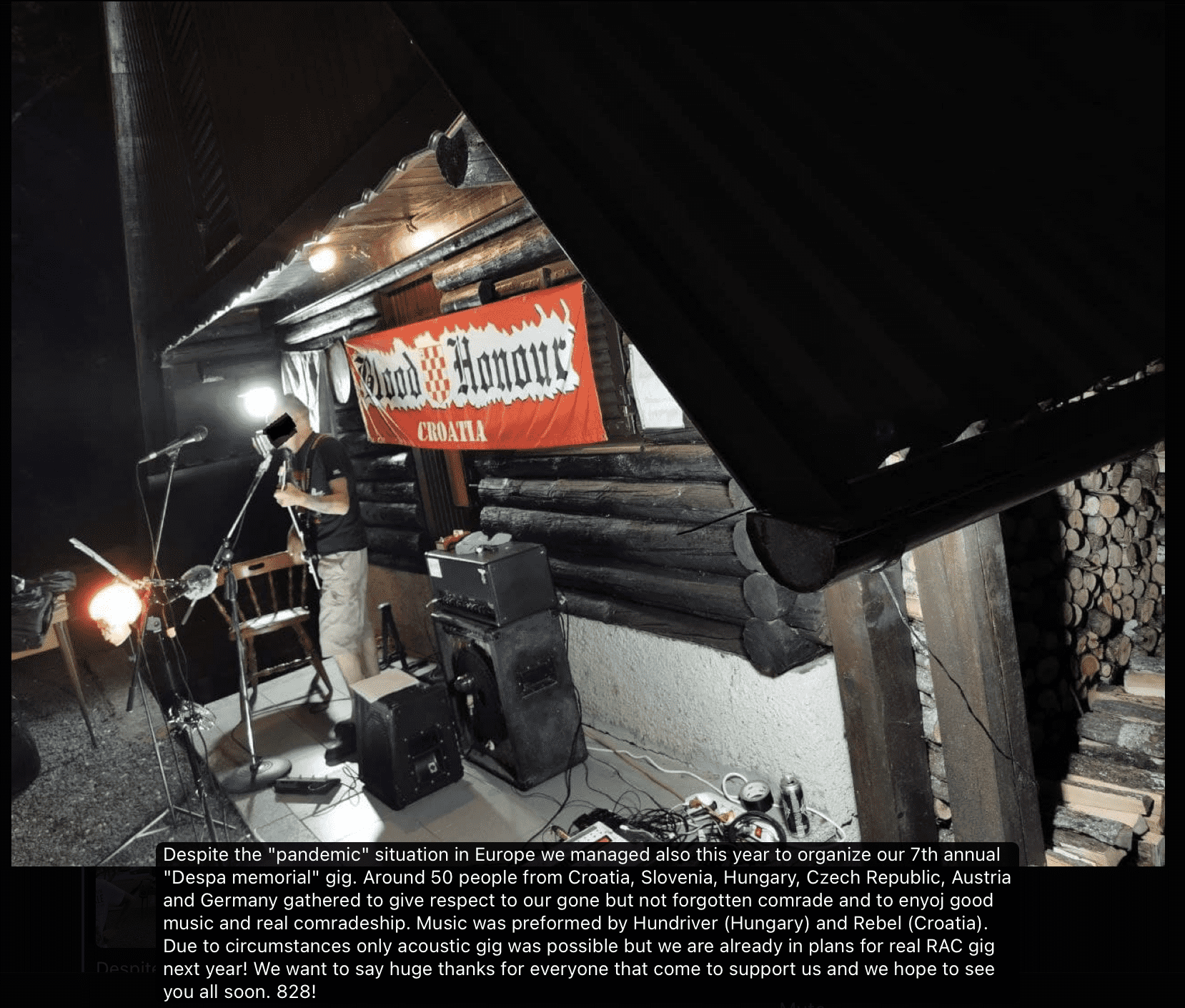 BIRN made contact with Patrik at the San Remo café in Rijeka, a port city otherwise known as one of the more liberal in Croatia, a former Yugoslav republic where conservative currents are strong.

He was one of around 10 men happily discussing the rise of the right in Europe on the eve of Giorgia Meloni’s swearing in as prime minister of neighbouring Italy at the helm of a far-right government. Her Brothers of Italy party has neo-fascist origins.

The men said they would welcome a similar turn of events in Croatia, but accused the media, cultural scene and education system of promoting left-wing ideals.

Patrik declined to tell BIRN his surname, and said he had bought the Blood and Honour hoodie not from the organisation’s Croatian branch but online and only because he is fond of such symbols.

On the front of the hoodie were the words, ‘Maks Kvaternik Patriotic Shop.’ An Internet search turned up a page under the same name on the Russian social network VKontakte. Among the page’s followers is ‘Patrik Vidmar’. Vidmar’s Facebook profile was recently deleted, but BIRN found him tagged in a photo on Facebook showing a group of men on their way to a right-wing concert in Italy. In the photo, Vidmar is sitting beneath flags of Blood and Honour and ‘Skinheads Croatia’.

Concerts are a key means of networking for far-right organisations in Europe.

When photos of the tattooed Hungarian men appeared in Croatian media, the portal Anti-Fascist Courier identified one of them as a guitarist of the band Feher Vihar, whose photo can be found on the website of the Hungarian Blood and Honour branch.

The report linked their visit to Rijeka with this year’s ‘Despa Memorial’ concert, an annual concert held in memory of Goran ‘Despa’ Despic, a man Blood and Honour Croatia described as their “brother” and who died in a motorcycle accident in 2014.

Cooperation between the Hungarian and Croatian branches of Blood and Honour is particularly strong, with Hungary under right-wing Prime Minister Viktor Orban a frequent venue for far-right gatherings.

In messaging apps, members of the Hungarian branch have shared photos and info about neo-Nazi concerts in Croatia.

“Concerts serve various purposes depending on whether they are open to broader public or serve only for internal cohesion, for spreading stories and mobilising people,” Ritzmann told BIRN.

“Not every song is like that, but the essence of lyrics is that there is a threat to the white race and something must be done right now,” he said.

In 2010, police in Croatia detained a number of people over a banned concert in the central town of Krizevci, at which the German far-right band Blue Max was reportedly due to perform. Police stopped the concert from going ahead after it emerged it was due to be held in a local community centre.

Three people were convicted of displaying symbols that incite discrimination and intolerance, while the organisers were punished for not reporting a public gathering. The police did not provide BIRN with the names of those convicted. A newspaper report said that one of them appeared before the judge in a Blood and Honour shirt.

BIRN found no information about police breaking up similar concerts since then.

News about this year’s Despa Memorial concert was shared on the Telegram channels of both the Hungarian and Croatian branches of Blood and Honour. The Croatian branch said it was attended by “around 70 people from Croatia, Germany, England, Hungary, Slovenia and Switzerland.”

It was signed ‘828’ – a common practice among neo-Nazi organisations using numbers to denote letters of the alphabet, in this case HBH, or Hrvatska [Croatia], Blood, and Honour. The Croatian channel is now accessible only with an invitation and password.

On the basis of photographs from Rijeka, previous concerts and profiles on social media, BIRN believes that the person with Nazi tattoos next to the Hungarian guitarist photographed on the Rijeka beach is Adam Toth, also from Hungary. Shortly after the Antifascist Courier post, his Facebook profile was deleted.

Photographs of the first Despa Memorial concert were published in 2015 on the portal Patriotic Voice – the Voice of Croatian Patriots, along with a post describing the event in a summer house “in thick shade in the vicinity of the Adriatic coast” with guests from Italy, Slovenia and Hungary. People can be seen making Nazi salutes, while songs were sung about “the awakening of Europe” and in honour of Blood and Honour.

One person who took pride in attending was Bojan Mohoric; first mentioned in the Antifascist Courier article, BIRN has found that Mohoric published photos in 2020 with a flag of the Croatian branch of Blood and Honour on his Twitter profile, which is no longer active. 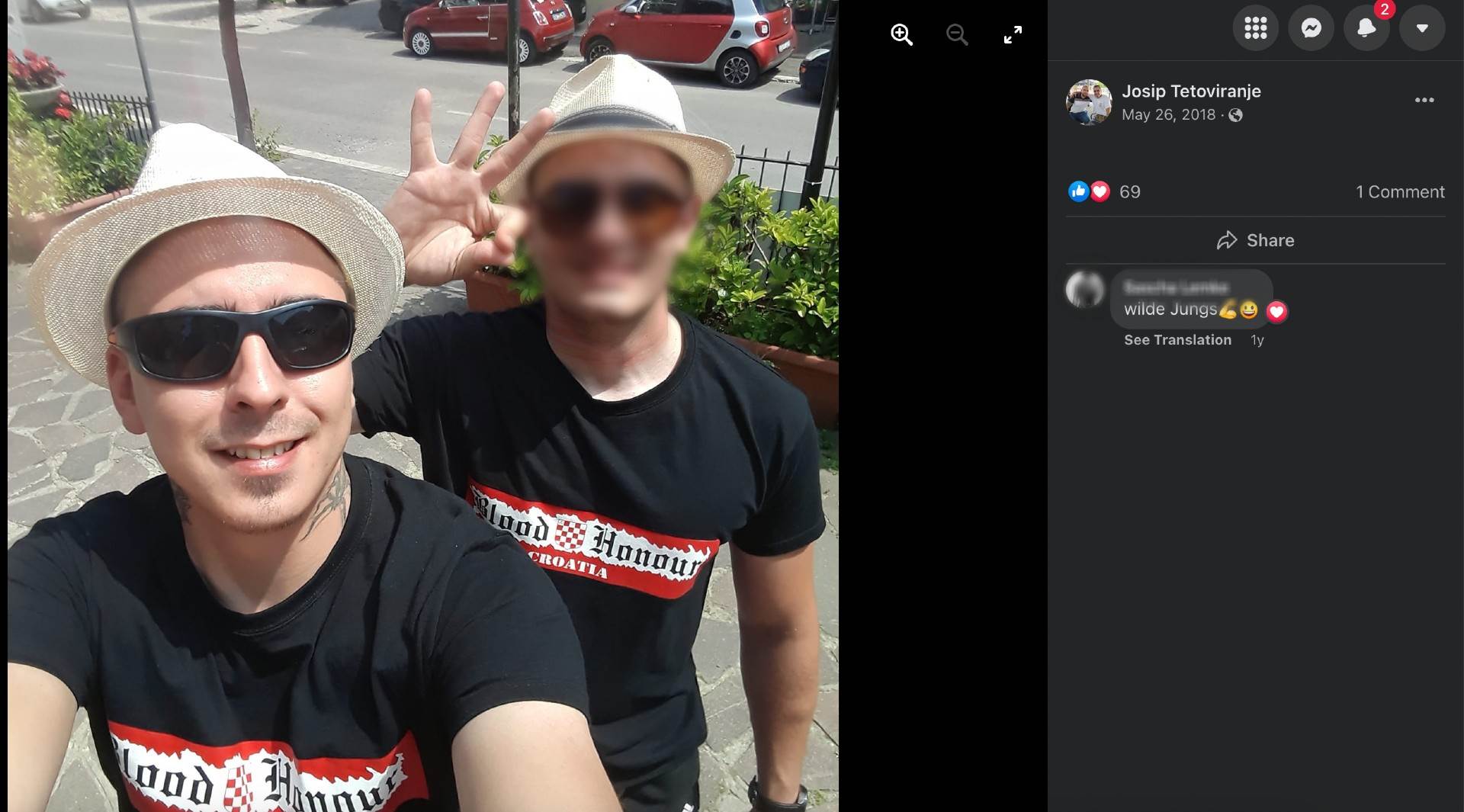 The flag also featured the coat of arms of the World War Two fascist puppet state, the Independent State of Croatia, NDH, as well as the triskele symbol that was appropriated by the Nazis and has become a well-known symbol of white supremacy.

On his Twitter profile, Mohoric wrote that he is from Rijeka. He did not respond to requests for comment.

According to Croatia’s official registry of associations, Mohoric is founder of the Nevera Cultural Identity Society. At the association’s registered address in Rijeka, BIRN found Marko Turkalja, a musician from Zagreb who confirmed that the association was registered at his home address. He said that Mohoric lived in the same building but was on vacation.

Mohoric’s association shares the same goals as the Croatian branch of Blood and Honour, namely the promotion of Croatian and ‘European’ identity. It claims on its website to act within the ideological framework of Croatian nationalism and European ‘identitarianism,’ a movement that argues white Europeans are being displaced by foreign immigrants.

In late October, BIRN found Mohoric at a debate on the rise of the right at a café in Rijeka, sitting across from Patrik. He declined to be interviewed or to confirm whether he is a member of Blood and Honour. “I don’t want to say anything. That’s my democratic right,” he said. 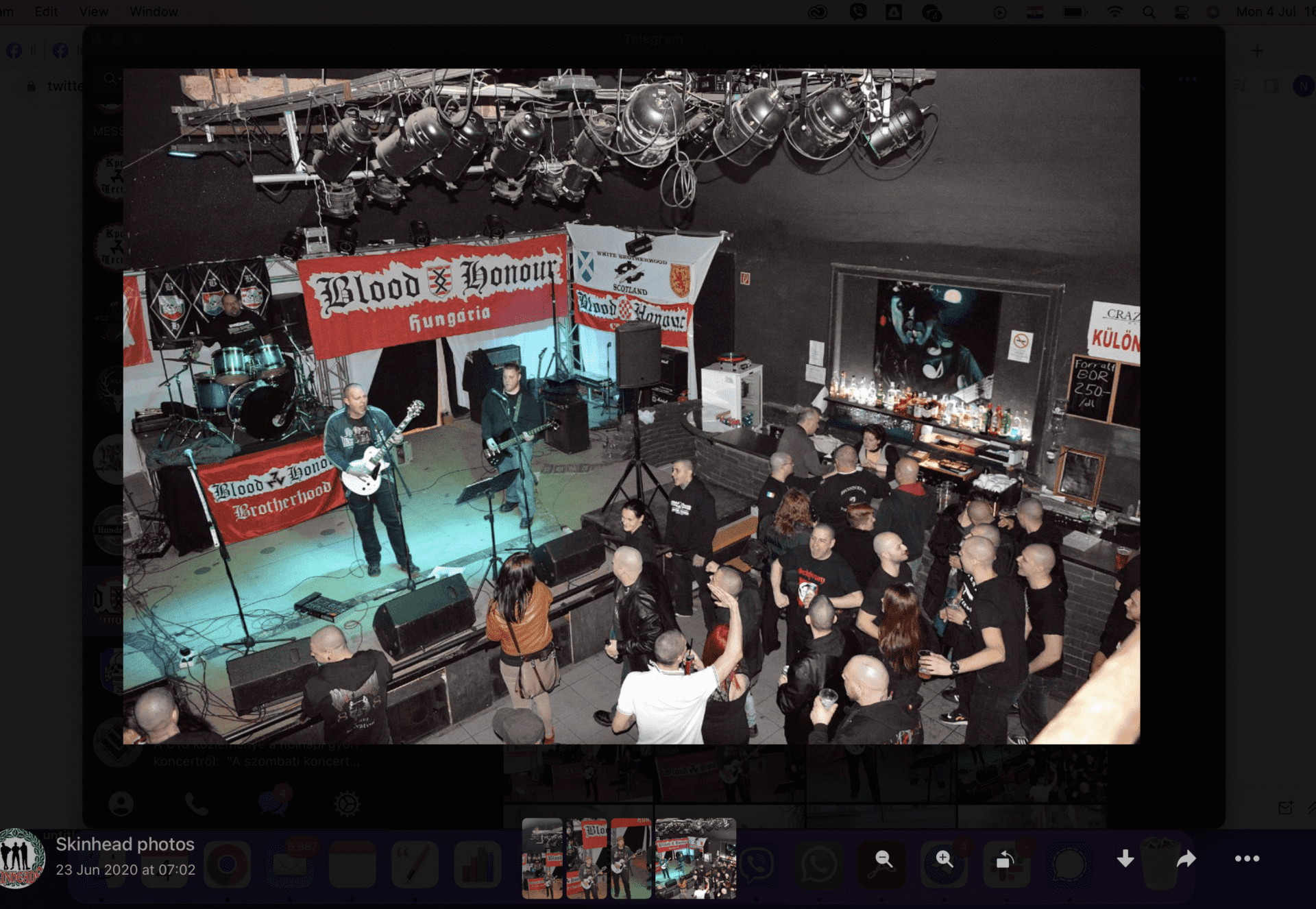 Concert of the “Blood and Honour” organisation. Photo: Telegram screenshot.

Another neo-Nazi concertgoer is Hrvoje Pavlicic, who posted a photo from a Blood and Honour concert last year. After being contacted by BIRN, Pavlicic removed the photo and a number of others posts and then blocked the BIRN reporters on Facebook. In his social media activity, Pavlicic has expressed hatred of migrants and other minorities.

Pavlicic’s profiler also previously featured a photo depicting knights primed for battle, with the hashtag #refugeeswelcome. Pavlicic is a member of the Order of the Silver Dragon, a Croatian association dedicated to the preservation of ancient customs, beliefs and crafts.

Another of Pavlicic’s photos shows him in a t-shirt with the words ‘White Pride Worldwide’ written around a Celtic cross, a common white supremacy symbol; another shows him among a group of people beneath confederate flags and the slogan ‘Rock against Communism,’ the name given to a series of right-wing concerts held in Croatia.

In Osijek, eastern Croatia, BIRN tracked down another member of Blood and Honour to a tattoo studio called Mad Arts but also known as Mosquito.

The own, Josip Mujcinovic, has a photo on his Facebook page showing him in a shirt featuring the words ‘Blood and Honour Croatia.’ His studio offers tattoos of the Black Sun, a well-known neo-Nazi symbol.

Outside the studio, Mujcinovic told BIRN he did not have time to talk. He had the number 88 tattooed on his neck, which most often corresponds to the Nazi salute ‘Heil Hitler’.

After the encounter, Mujcinovic deleted photos showing him in the company of individuals in Black Sun t-shirts; his own shirt bore the word ‘Defend’, widely used among rightists to mean ‘Defend Europe’.

In February, after Russia invaded Ukraine, Mujcinovic posted on social media in support of Ukraine; days later, Mohoric posted a photo of what claimed to be an ‘official announcement’ by the Croatian branch of Blood and Honour and that read: “Blood and Honour Division Croatia stands unconditionally in support of Ukrainian nationalists in liberating their country from Russian invasion and occupation. Ukrainian brothers and sisters, keep the faith, no surrender!”

Neither the Hungarian nor the Croatian branch of Blood and Honour responded to requests for comment.