Since the Uborak and Sutina massacres, the most serious war crimes in the Herzegovina region during the 1990s conflict, the victims’ families have been calling for a dignified memorial, but have faced indifference from ethno-nationalist political leaders.

I have an idea regarding Liska Park.” This brief statement made at the end of August 2022 by the mayor of Mostar, Mario Kordic of the Croatian Democratic Union Bosnia and Herzegovina, HDZ BiH party, was enough to reignite a debate about the Liska Cemetery that first started around three decades ago.

Located on Liska Street, facing Mostar’s psychiatric hospital, this little piece of land has multiple names: Liska Harem, Liska Park, Liska Cemetery. It was a park before the war, but was transformed into a cemetery in 1992 as the Yugoslav People’s Army, JNA and extremist Serb units besieged and bombed Mostar. Victims of all communities were buried there together.

After the 1994 Washington Agreement that ended the conflict in the area between Bosnian Croat armed forces and the Army of Bosnia and Herzegovina, Mostar became a divided city with two municipalities and a central zone. The debate over which who should have control over the Liska Cemetery was extremely tense as it is located not far from Revolution Boulevard, the former front line.

Despite demands that the cemetery should be part of the central zone jointly governed by the Bosniak-led Party of Democratic Action, SDA and the HDZ BiH, it was decided that it would belong to the Western, Croat-dominated part of the city. As a result, it was thought that the cemetery would immediately become inaccessible to Bosniaks.

On February 10, 1997, the day of Bajram (Eid), when Muslims honour their dead, the families of Bosniaks buried in the Liska Cemetery went to pay their respects. Bosnian Croat special police attacked the mourners with clubs and then, as they were withdrawing towards Revolution Boulevard, police opened fire, killing a man called Refik Suljemanovic and wounding several other people.

Long known as the ‘communal cemetery’, Liska is a contested space in the city. There have been various campaigns to exhume the remains of the war victims buried there and rebury them in other cemeteries. These campaigns have always been initiated by politicians, not the families of the dead.

The cemetery now stands neglected. There is no fence or sign. Containers for trash have been left by the graves. A small path cuts through the cemetery and people walk past, cars park alongside the graves, and the site is generally dirty. The cemetery is being left untended because “people [of different ethnicities] are buried there together, it is a problem for them, the politicians”, said Zeljka (not her real name), whose brother is buried at Liska.

After the post-war reunification of the city imposed in March 2004 by the international official overseeing the peace deal that ended the 1990s conflict, High Representative Paddy Ashdown, Liska has remained in poor condition and is a regular target for ethno-nationalist politicians. 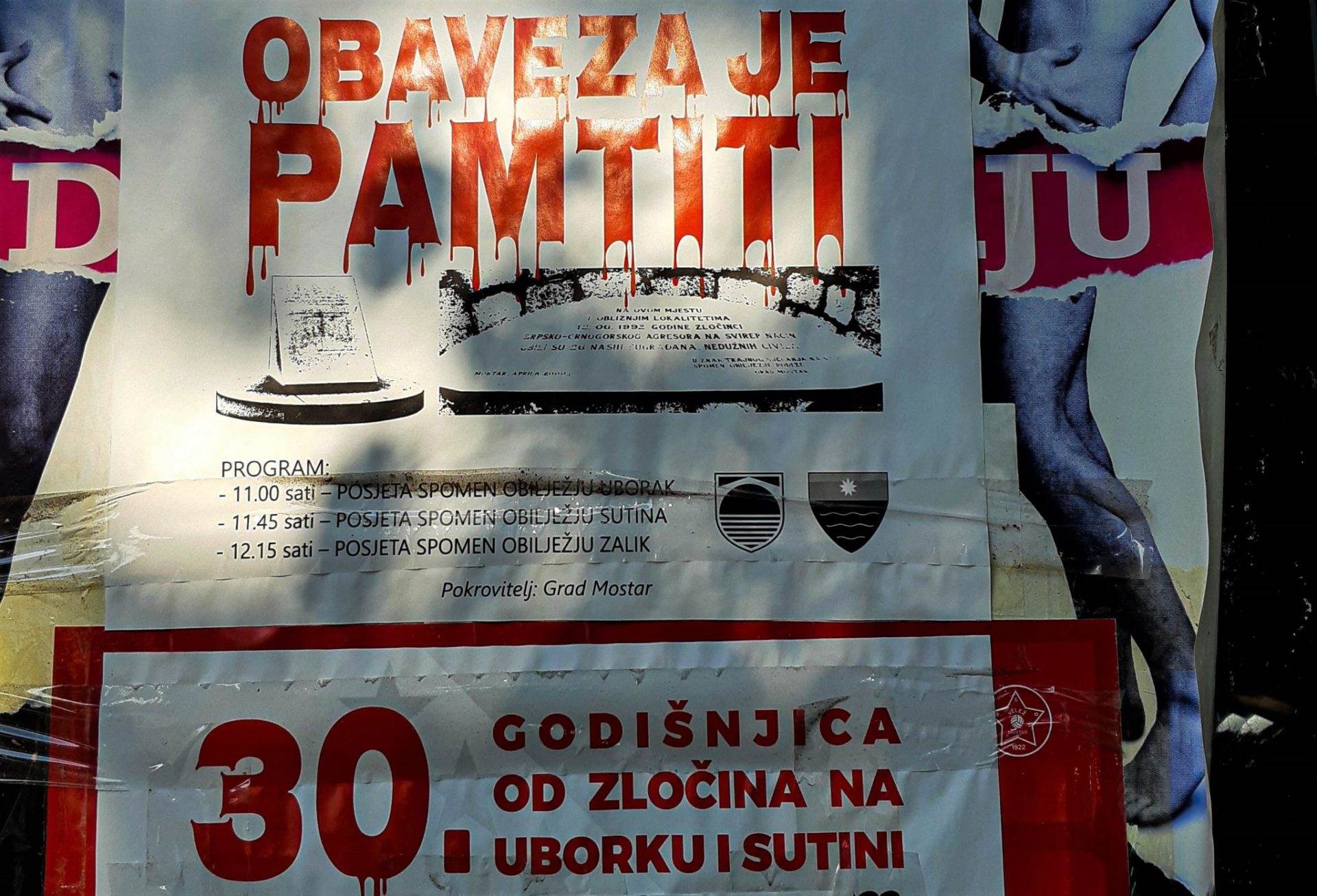 Poster marking the 30th anniversary of the massacres in Uborak and Sutina. Photo: Aline Cateux.

Mayor Kordic’s “idea regarding Liska”, announced in August, is to exhume all the graves and build a monument to all the civilian victims of Mostar there. The mayor knew that such a declaration would provoke consequences, particularly since the families of people buried there were not consulted or warned beforehand. His announcement, coming before an electoral campaign, provoked widespread public reactions in the city.

However, an agreement between the municipal authorities and victims’ associations to adopt June 13 as the annual Day of Civilian Victims of the War in Mostar has been welcomed, as has the commitment to building a monument to civilian victims. “We think it is very important for the families, for the city,” said Adnin Hasic of the Association of Families of Victims Killed in Uborak and Sutina.

The association represents relatives of 114 civilians who were executed on June 13, 1992 at a garbage dump in Uborak and near a cemetery in Sutina on June 13, 1992; the Bosniak and Croat victims of the killings were then buried in mass graves. No one has yet ever been convicted of the massacres.

“I think that because there were Croat and Bosniak victims in the mass graves, Uborak and Sutina can be a link between everyone in the city,” said Hasic.

But since 1992, monuments in Mostar have been the subject of heated debates and a target for vandals. The best-known is probably the Partisan Cemetery, a WWII anti-fascist memorial complex that was the masterpiece of architect Bogdan Bogdanovic. It has been regularly vandalised, sprayed with graffiti and recently partly demolished when 700 tombstones in the cemetery were systematically smashed into pieces.

Every anti-fascist monument located in the western part of the city was either destroyed completely during the 1992-95 war or partially damaged, and in some cases renovated and then desecrated again.

Memorials related to the 1990s war have also been targeted. A monument next to Mostar’s municipality building in memory of fallen soldiers of the Army of Bosnia and Herzegovina who defended the city was destroyed within hours of being installed. Never rebuilt, it lies in pieces by the former Revolution Boulevard, now called the Boulevard of the Croat Defenders.

As in the rest of Bosnia and Herzegovina, memorialisation is a complex issue in Mostar. It is furthermore complicated by the division of the city and by radical ethno-national memory politics, which represent a huge obstacle to the establishment of any common vocabulary about the conflict. 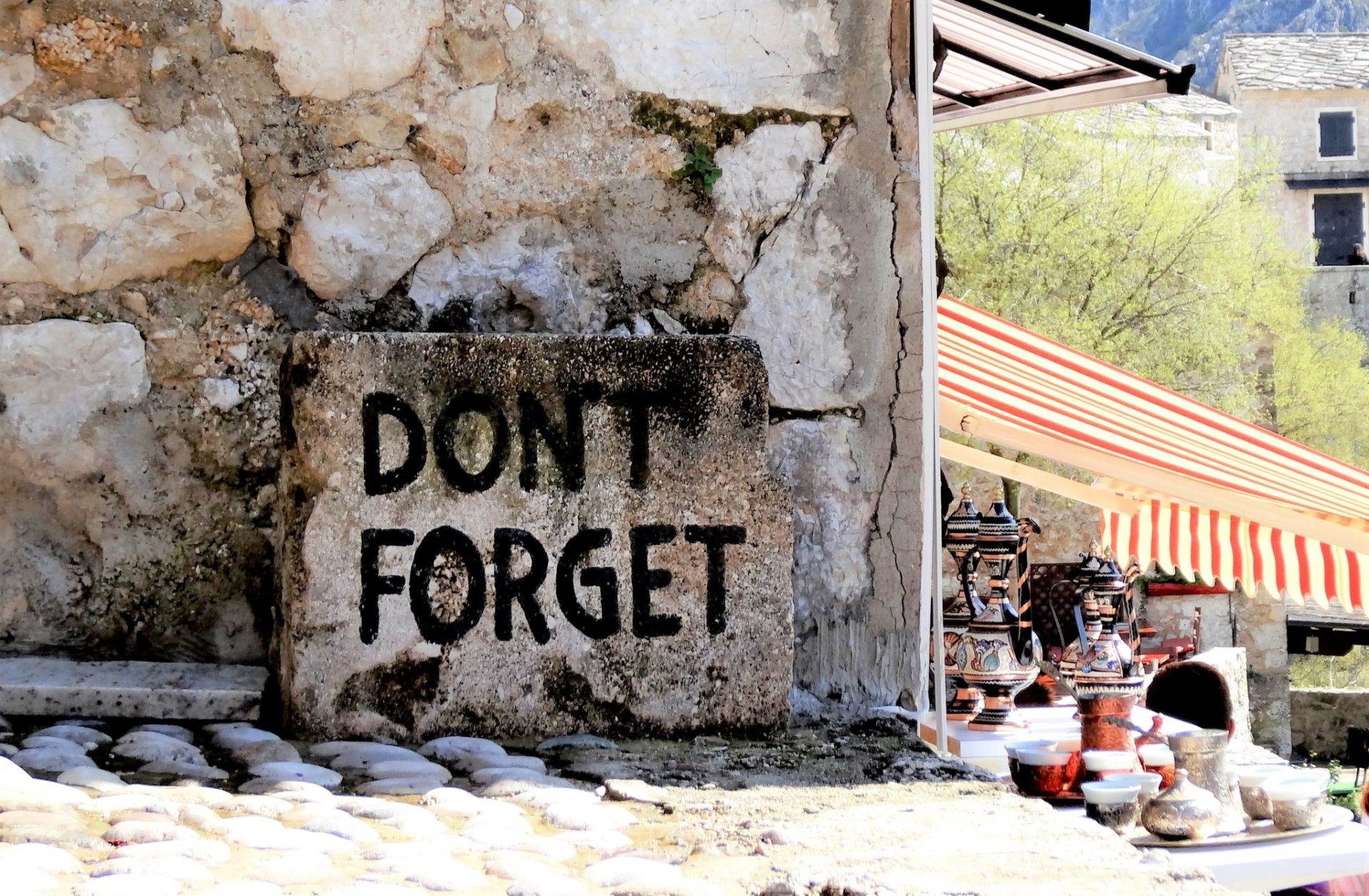 As with legal cases, the survivors and the families of victims have acted as the spearhead of the struggle to memorialise the crimes. However, they have faced indifference rather than opposition.

The truth is that Uborak and Sutina have not been part of the priorities of any of the ethno-nationalist powers in the city as none of them could properly appropriate the massacres for their own political or electoral use. The multi-ethnic character of the victims of the massacres didn’t fit into any of the ethno-nationalist narratives of the war in Mostar, so the former warring parties were not able to use them as part of their appropriation of war memorialisation.

The conflict in Mostar in 1992 has also not been a priority for researchers, who have focused on the second conflict in the city in 1993, when the city’s symbol, the Old Bridge, was destroyed by Bosnian Croat forces.

“Somehow, this is [considered] normal,” said Branka, a 60-year-old Mostar resident whose brother and cousin died defending the city during the 1992 siege.

“There were more victims in 1993, and the camps, all these horrors and the bridge of course. And nobody has an interest in 1992 because of what happened to the Serb civilians in Herzegovina back then, but in the city also,” she added, referring to the various camps where Serb civilians were imprisoned and executions in the Mostar prison.

In June 1992, when the JNA and the Bosnian Serb Army retreated from Mostar, the Croatian Defence Forces and Croatian Defence Council took control over the city. Their first act of retaliation was the destruction of Sveta Trojica, the Serbian Orthodox cathedral, one of the most important symbols of the city. This act of destruction took place simultaneously with the discovery of the mass grave in Sutina. Meanwhile, Serb civilians were leaving Mostar in fear of retaliation or, in some cases, in fear of justice.

Adnin Hasic insisted that “it is crucial that the memory of all the victims of the city are remembered”.

“This year we managed to commemorate the crimes committed in Rastani on August 24, 1993. It is completely forgotten,” explained Hasic. His 12-year-old cousin was killed in the village of Rastani, along with 23 other civilians and seven unarmed members of the Army of Bosnia and Herzegovina, by the Croatian Defence Council and its ‘Convicts’ Battalion’ of mobilised convicts led by Mladen ‘Tuta’ Naletilic.

In the archives of the International Criminal Tribunal for the Former Yugoslavia, the only mention made of Rastani in the Hague court’s trial judgment of Naletilic and Convicts’ Battalion officer Vinko Martinovic concerns violence that happened there after August 1993. The massacre isn’t mentioned.

Hasic said that memorialisation is a daily duty for him and will be until the end of his life. This year, his organisation met the Museum of Genocide and War Crimes in Sarajevo: “We have items about Uborak and Sutina on display [at the Sarajevo museum] now: Redzep Karisik’s handcuffs and my deceased father’s identity card.” This year was also the first time Hasic and his team paid their respects at a monument to Croat civilians killed by the Bosnian Army in Grabovica in 1993.

Thirty years after the massacres in Uborak and Sutina, people from Hasic’s generation, who were children at the time of the war, have taken it on themselves to preserve the memory of the victims and support potential progress towards justice and the prosecution of the criminals responsible for the death of the 114 civilians from Mostar, as well as other crimes.

“There are a lot more unprosecuted and completely forgotten crimes in Herzegovina, in Mostar: Vranica, Zulje, Branjevic, and for sure crimes committed against Serb civilians,” Hasic said.

The agreement between victims’ associations and the city authorities to hold an annual commemoration on June 13 and to finally build a memorial is all the more important in a context in which not all the crimes committed in the area have been prosecuted, although the names of the victims are known. “We will have a monument, somewhere in the city centre, with the names of the people [who died]. It cannot be otherwise. Eight hundred and sixty civilians died in such a little city. Their names have to be known and put on the monument,” Hasic said.

Before mayor Kordic’s announcement in August, Hasic said that he was confident that the municipal administration will take care of the process properly: “We do not know when, we don’t have a deadline, but we are at the disposal of the municipality for discussions about the monument.”

But Kordic’s plan to exhume the bodies buried in the Liska cemetery and build the monument for all civilian victims at the site – without consulting with or warning the families of the victims in advance – has not received a positive welcome.

At a meeting preceding the announcement, the OSCE had offered to finance the renovation of the cemetery, its fences and the monument. The OSCE stressed that in any case, no statement should be made before the families were contacted. But mayor Kordic chose to go his own way and the announcement of his plan has complicated the issue again.

“Everything could have been simple, there were several proposals to deal with Liska and the monument to civilian victims in a dignified way, but no. It had to be politicised,” said Arman Zalihic, a member of the Mostar municipal council who attended the meeting between the municipality and the OSCE. “It’s horrible for the families and now something that could have been dealt with in a week will need months to be solved.”

Adnin Hasic and the families of the victims of the Uborak and Sutina massacres recommended at the meeting with OSCE that the monument for civilian victims of Mostar could be either built in the central Spanish Square or next to the city hall. Hasic told BIRN that his organisation does not support any exhumation of bodies from the Liska cemetery.

While they wait for their memorial, the survivors and families of the victims carry on with their task in dignity.

Read part one of Aline Cateux’s three-part series about the Uborak and Sutina massacres here, and part two here.

This article is published as a part of the Enhancing Accountability and Memorialisation Processes in the Balkans project, financed by the Matra Regional Rule of Law Programme.