In the Bosnian town of Prijedor, site of some of the worst Bosnian Serb crimes of the 1992-95 war, members of a party in power helped create a right-wing organisation committed to rewriting history, BIRN can reveal.

On the night of January 8-9 this year, Omer Redzic, the imam of Carsijska Mosque in the town of Prijedor, northern Bosnia and Herzegovina, heard chanting outside the mosque. He pulled out his phone and recorded a group of people marching past.

“General, praise be to your mother,” they shouted, echoing the phrase sometimes scrawled on walls in Serbia and Serb-populated parts of Bosnia beneath murals of Ratko Mladic, the general who led Bosnian Serb forces in the 1992-95 war and was sentenced to life in prison in 2017 for genocide, crimes against humanity and war crimes.

Mladic’s forces cleansed Prijedor of Croats and Muslim Bosniaks early in the war; the area became synonymous with the use of detention camps where killings, torture and brutal interrogations were carried out. January 9 is the day when Bosnian Serbs celebrate the founding declaration of Republika Srpska in 1992 despite the holiday twice being declared unconstitutional by Bosnia’s Constitutional Court.

Redzic posted his video online, and quickly incurred the social media wrath of the organisations behind the march – Samopostovanje [Self-respect] and Princip [Principle], both of which regularly glorify war crimes, express support for Russia’s war in Ukraine, and oppose the marking of White Armband Day, a day of remembrance for the crimes committed in the Prijedor area by Bosnian Serb forces.

“The message sent to me on January 8 was not meant only for me,” Redzic told BIRN. “It was a message for Carsijska Mosque and the ethnic and confessional group that perceives this mosque as its religious and ethnic cultural venue.”

Such messages, however, are likewise not only the work of Samopostovanje and Princip, since both organisations enjoy close ties too with a political party that sits in the government of Bosnia’s mainly Serb-populated Republika Srpska entity, which Prijedor is part of, according to an investigation by BIRN.

At least five officials of Ujedinjena Srpska [United Srpska] from Prijedor are founding members of Princip, while one party member belongs to Samopostovanje, BIRN can reveal.

Indeed, Princip and the Prijedor branch of Ujedinjena Srpska share the same address, while an official of the co-ruling political party has taken credit for financing Princip from the local budget. This, despite the fact that Samopostovanje and Princip, experts say, both bear all the hallmarks of extremist organisations.

“We can conclude from their announcements and activities that they belong to far-right organisations,” said extremism researcher Nejra Veljan. “Their activities not only include denial of war crimes and genocide, but also glorification of criminals and full support to the Russian invasion of Ukraine.”

BIRN has reported previously on how members of Princip and Samopostovanje played a part in a ban on this year’s walk marking White Armband Day, so called because of the white armbands that witnesses at the UN tribunal for the former Yugoslavia in The Hague said non-Serbs in Prijedor were told to wear during the war. Serbs dispute that any such order was ever issued.

The new investigation by BIRN now reveals the ties between Ujedinjena Srpska, Prijedor local authorities and the two groups, both of which have come out strongly in support of Russia’s war in Ukraine.

Prijedor deputy mayor Zarko Kovacevic, a member of Ujedinjena Srpska, has appeared in a number of photos with members of both organisations on social media. Princip leader Milos Savic also heads the Active Youth Council of Ujedinjena Srpska in Prijedor; Princip deputy leader Drasko Topic, as well as Tanja Zec, Luka Drljaca and Leon Maric – who are named in court documents as founding members of Princip and members of its Managing Board – are also involved in the work of Ujedinjena Srpska.

Savic, Zec and Topic previously ran for election in Prijedor on behalf of Ujedinjena Srpska, while Drljaca confirmed to BIRN that he is a member of the party.

None of them agreed to discuss their activities for this story.

Branko Culibrk, an activist of the Kvart youth centre in Prijedor, said that part of Princip’s raison d’etre was to “sabotage White Armband Day,” a day that Culibrk helps organise and for which he too has become a target of Samopostovanje.

Princip, which is listed in court records as sharing the same address – 47 Kralj Aleksandar Street, Prijedor – as the city board of Ujedinjena Srpska, was founded in April 2021.

This year, the organisation made headlines when it announced that its members would take to the streets to mark five years since the first inauguration of Aleksandar Vucic as Serbian president on May 31, the same day as White Armband Day. The announcement, BIRN reported previously, played into a decision by police in Prijedor to ban a traditional walk through the town by participants of White Armband Day.

At the time, BIRN found no members of Princip at the agreed gathering place. Fikret Bacic, one of the organisers of White Armband Day and a representative of parents of children killed in the war, told BIRN that he realised then the announcement had been made simply to disrupt the commemoration.

“It was most probably the first step towards trying to prohibit us from doing it next year,” Bacic said.

Samopostovanje has also made plain on social media that it wants to see White Armband Day banned.

Redzic said that the groups were seeking to “polarise” society and to “trivialise” what went on in the Prijedor region, in the notorious detention camps of Tomasica and Omarska.

Such efforts reveal “a strong cohesive link between those policies and Tomasica and Omarska,” the imam told BIRN. 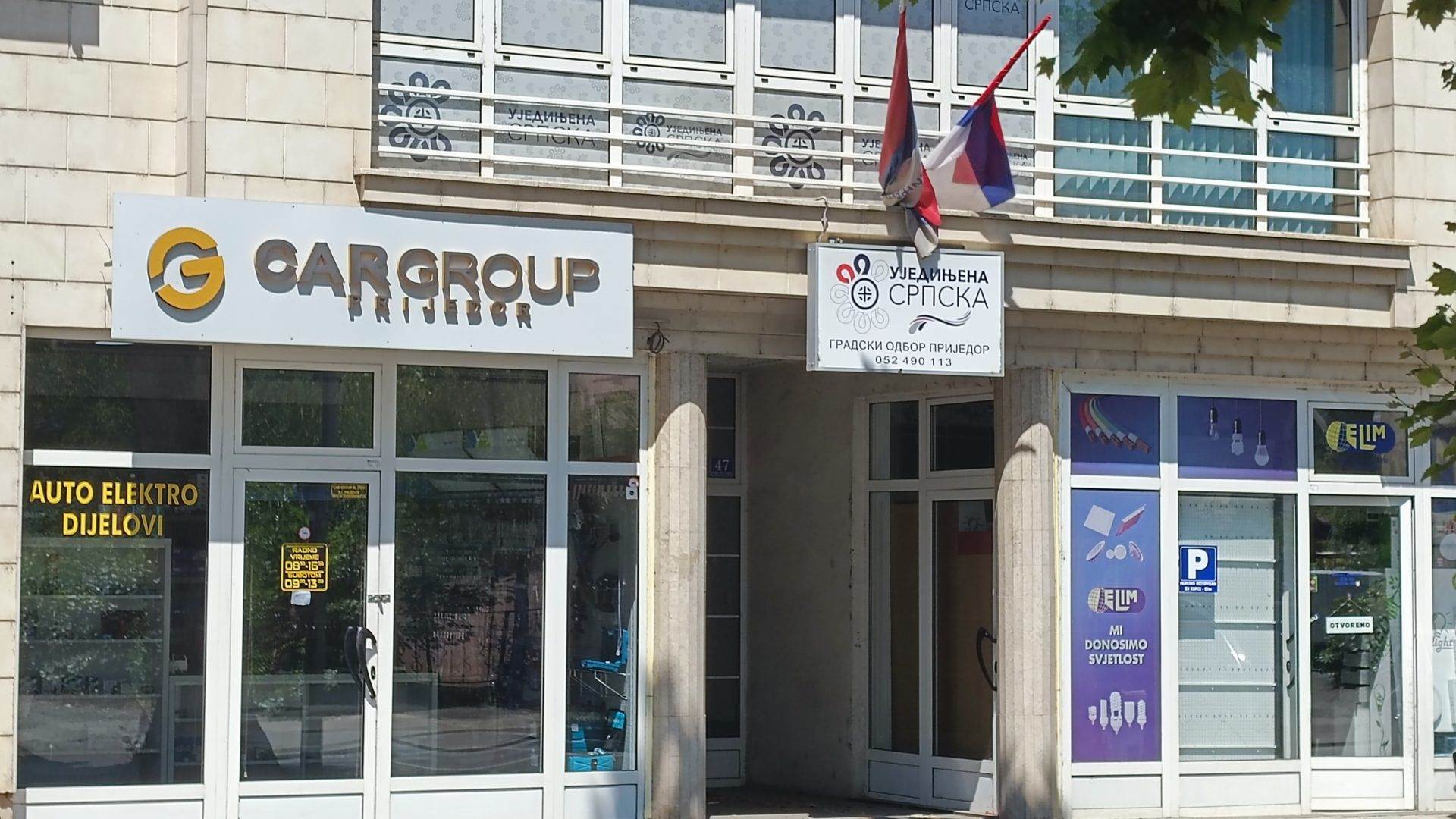 Princip, which is listed in court records as sharing the same address – 47 Kralj Aleksandar Street, Prijedor – as the city board of Ujedinjena Srpska, was founded in April 2021. Photo: BIRN.

Beyond personnel ties between Princip and Ujedinjena Srpska, Princip has also benefitted from funds allocated by the City of Prijedor, notably when Kovacevic filled in for roughly two months as mayor after Dalibor Pavlovic resigned in October last year.

In November, Kovacevic, who refused to speak on the record for this story, signed off on KM 9,000 [4,600 euros] for an unspecified local project involving Princip, the City Administration told BIRN.

While some members of the local assembly questioned the payout, Kovacevic said it was “as clean as a whistle.”

The Finance Department told BIRN that the money had not been returned but that it was unaware whether a financial report on how it was spent had been submitted.

“What is really problematic is that the funds were paid without following any tender process or public procedure, which hasn’t been the practice so far, at least based on the insight we have into the financing of various organisations in Prijedor,” said Culibrk.

In May, Princip received another KM 600 [307 euros], approved by Pavlovic’s successor as mayor, Slobodan Javor, to offset expenses arising from Republika Srpska Army Day, which was organised jointly by Princip and members of Samopostovanje. Javor thanked both groups on Facebook, while Kovacevic, his deputy, was photographed in the company of members of both organisations.

Princip and Samopostovanje also had the help of the Prijedor branch of Serbian bikers group MC Srbi, which uses the ‘death’s head’, or skull-and-crossbones, image that was used by the Nazi SS divisions during World War Two. One MC Srbi biker, Bojan Desic, has previously expressed support for the notorious neo-Nazi organisation Blood and Honour.

Working to ‘bust the myth’ of White Armband Day

Ujedinjena Srpska leader Nenad Stevandic insisted that members of his party are prohibited from holding management roles in other organisations, but that he cannot stop them from “socialising”.

“I am aware that they [Princip] are good with Zarko Kovacevic and that they are, so to say, on the right of the political spectrum,” he told BIRN. “But the founders of the organisation and its management are not members of Ujedinjena Srpska, because I have prohibited it. But I do not ban them from socialising or promoting each other’s announcements.”

One thing they have in common, he conceded, is opposition to White Armband Day, which they say is based on lies about a decree allegedly broadcast on local radio in 1992 requiring non-Serbs to wear white armbands and/or fly white flags or bed-sheets from the homes, marking them out in a manner reminiscent of the Jews under the Nazis.

“We all think that this White Armband Day in Prijedor was made up; Zarko Kovacevic took that up and was then supported by that organisation, Princip,” Stevandic told BIRN. “In a manner of speaking, it was an unfortunate circumstance that they framed us as some sort of, so to speak, right-wing.”

Historian Boris Radakovic, a prominent member of Samopostovanje, told BIRN: “The facts tell us that there were no white armbands and we consider that the event is used for political purposes and we can with certainty call it anti-Serb.” He confirmed that the organisation had taken part in two “campaigns” as part of the City of Prijedor’s ‘Defence Day’. In mid-August, Samopostovanje launched a documentary under the title Busting the Myth of ‘White Armbands’ in Prijedor in 1992. Radakovic denied too that there were any Serb-run concentration camps in the Prijedor area, calling them ‘assembly camps’; any crimes committed were the work of individuals and had been overblown, he insisted.

Bacic, one of the organisers of White Armband Day, said that the denial of something that is part of at least two war crimes verdicts in The Hague is deeply unsettling for Bosniak returnees to the Prijedor area, as too are the murals of Mladic and other war criminals.

“Around the city of Prijedor many murals have been painted,” he said. “Some citizens and a part of the authorities are trying to prevent that. As for the others, they destroy and remove one, but five new ones appear instead.”

Majda Halilovic of the Atlantic Initiative told BIRN: “Knowing that Samopostovanje group organised a lecture in May this year in the City Construction Institute in Prijedor, it becomes clear that they have approval of city authorities for their activities.”

Another link between Samopostovanje and Ujedinjena Srpska is Dusan Popara, who is a member of both and a long-time associate of Kovacevic, the deputy mayor. Both men were originally politically aligned with ultranationalist Serbian war criminal Vojislav Seselj, but moved to Ujedinjena Srpska in 2018.

Bacic said that the failure of authorities to punish them sent a powerful message to returnees.

“When you feel something that existed 30 years ago coming back again, provoking us in the same manner, the city authorities should do more to prevent it,” he said. “Such actions should simply be punished, not ignored.”