The UN, EU, OSCE and others have told Bosnia it must make the appointment of the three rights ombudsmen more open to the public and CSOs – or face penalties.

The UN has criticised Bosnia concerning the non-transparent way it selects its state ombudsmen, it has been confirmed to BIRN.

The six-year mandates of three state human rights ombudsmen expired in November 2021, but new ones have still not been appointed.

A provisional joint commission of both houses of the state parliament tasked with implementing the ombudsmen appointments procedure has so far adopted a number of acts but has not made them available to public – nor were international and domestic civil society institutions fully allowed to participate in the process.

The European Union in Bosnia and Herzegovina, the OSCE Mission and the United Nations have told the state authorities that they must make the process more transparent, while domestic organisations have warned of possible politicisation of the process.

“Given that all these activities have gone off the radar and that, unlike the previous selection, civil society has not been involved in the selection, it all goes to show that the process has been extremely politicised and non-transparent,” Edo Kanlic, the coordinator of the Initiative for Monitoring the European Integration of Bosnia and Herzegovina, an informal coalition of 40 civil society organisations, told BIRN.

Faced with criticism by the international partners and domestic institutions, members of the state parliament allowed the presence of local and international CSOs at the third session of the provisional joint commission, on July 26.

During the meeting, they discussed a letter from international and domestic civil society organisations requesting a revision to the Rule of Procedure to make documents public and engage the public in the process.

The OSCE Mission to Bosnia has also expressed its concerns. “The Mission notes with concern that the Commission failed to ensure a broad consultative process and transparency of appointment of the three Ombudsmen, excluding the civil society organisations and the international community from the recently adopted Rules of Procedure,” the OSCE Mission wrote.

Although it was appointed in July 2021, due to the political blockade of state-level institutions, the provisional joint commission was not formed until March this year, while Rules of Procedure, decision on a public call and the public call itself came in May.

“None of those documents are available to the public,” Kanlic said, adding that the commission has not respected the part of the Rules of Procedure that envisions that all material related to agendas is published on Parliament’s website in a timely manner.

“The Rules of Procedure became publicly available only upon a request by the Initiative,” he explained.

Analysing the Rules of Procedure, which was provided to them only on a freedom of information request, the Initiative noticed a number of drawbacks. 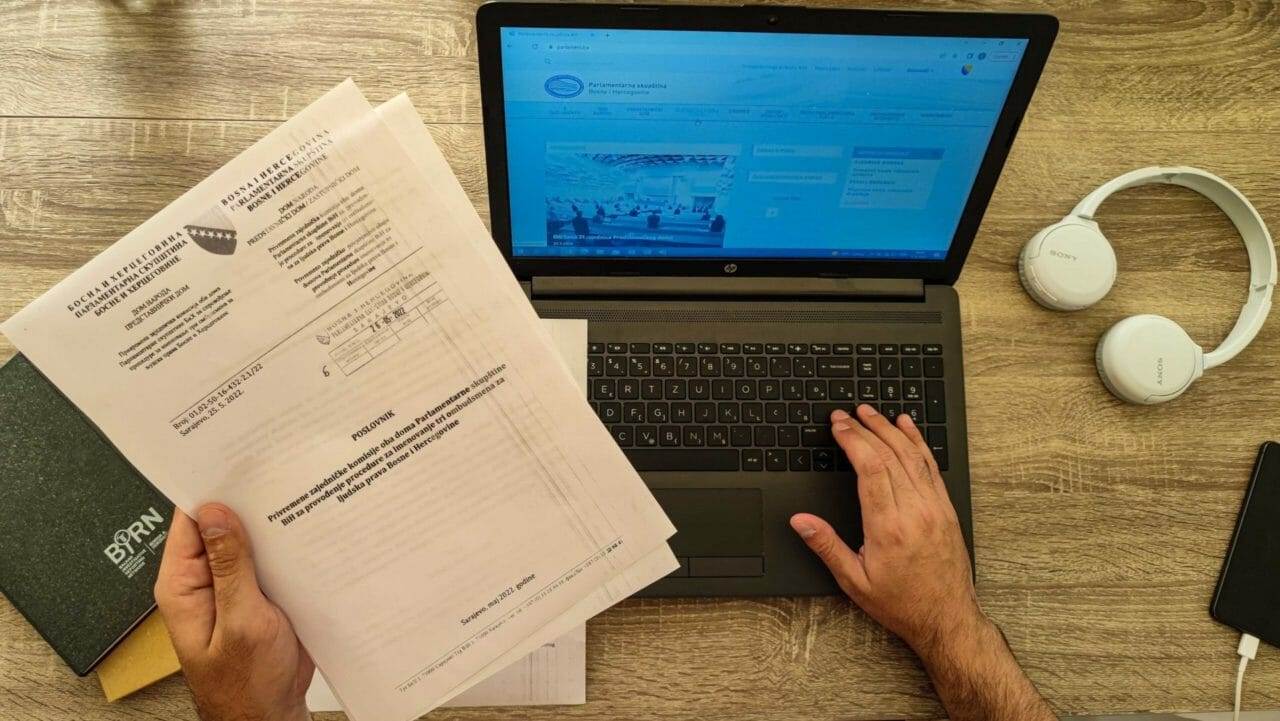 Article 7 of the proposed Rule of Procedure stated that, “during its work, the provisional joint commission will carry out consultations with international organisations and CSOs dealing with protection and promotion of human rights and civil liberties, which express interest in it”, leaving a possibility for “the provisional joint commission to seek help from specialists, academics and public servants, if need be”.

Kanlic says that two paragraphs on publicising work were also removed from the proposed Rules of Procedure.

All three articles, as Kanlic explained, were part of the previous Rules of Procedure, when Ombudsmen were last selected back in 2015. Kanlic said the removal of these three articles demonstrated a regression in transparency.

The UN’s High Commissioner for Human Rights on June 24 stated that the UN, alongside the Office of the High Representative, European Union, OSCE and Council of Europe, sent a letter to the Parliament of Bosnia on July 4, recalling the principles that should guide the appointment and selection of human rights Ombudsmen, based on UN and European standards referring to national institutions for improvement and protection of human rights.

“Considering the essential and sensitive mandate of the Institution of Ombudsmen for Human Rights, which is to promote and protect the human rights of all individuals in Bosnia and Herzegovina, it is of crucial importance that those selected be honest, have relevant professional experience, be impartial and devoted to the work on protecting the rights of everyone in the country,” the announcement read.

The UN recalled that, in 2023, the Sub-Committee on Accreditation will revise the status of several national institutions for human rights worldwide, including the Institution of Ombudsmen for Human Rights of Bosnia. “At that point we shall assess whether the Institution and its work are in accordance with the Paris Principles,” the UN announced.