With a cast and crew from across the Balkans, Italy and France, a new play takes on the controversy surrounding Peter Handke’s 2019 Nobel Prize for Literature and asks, ‘Can we separate the art from the artist?’

Some controversies never age and some resurface in different form.

That’s what happened on a recent Friday in the Kosovo capital, Pristina, when the furore over Austrian writer Peter Handke’s 2019 Nobel Prize for Literature was repackaged for the theatre.

It was not so much Handke’s work that was on stage, but the words and actions of a man who delivered a eulogy at the funeral of Serbian strongman Slobodan Milosevic in 2006 and cast doubt on the massacres of Muslim Bosniaks during the 1992-95 Bosnian war.

Celebrated in Serbia and in the Serb-dominated part of Bosnia, his Nobel Prize was lambasted in other parts of the former Yugoslavia, where Handke is seen as an apologist for the Greater Serbia ideology that fuelled the wars.

The decision by the Swedish Nobel Committee triggered debate over whether a writer’s work can be viewed and appreciated independent of his or her moral or political views.

“Our position is clear: fabrication of the truth, genocide-denial and support for war criminals cannot be ‘sold’ to the public as ‘literature’,” she told BIRN. “And those viewpoints cannot be considered and tolerated under the concept of ‘artistic freedom’.

The play premiered in Pristina on June 3 and arrives in Belgrade, the Serbian capital, on Thursday.

Spoke in support of war criminals 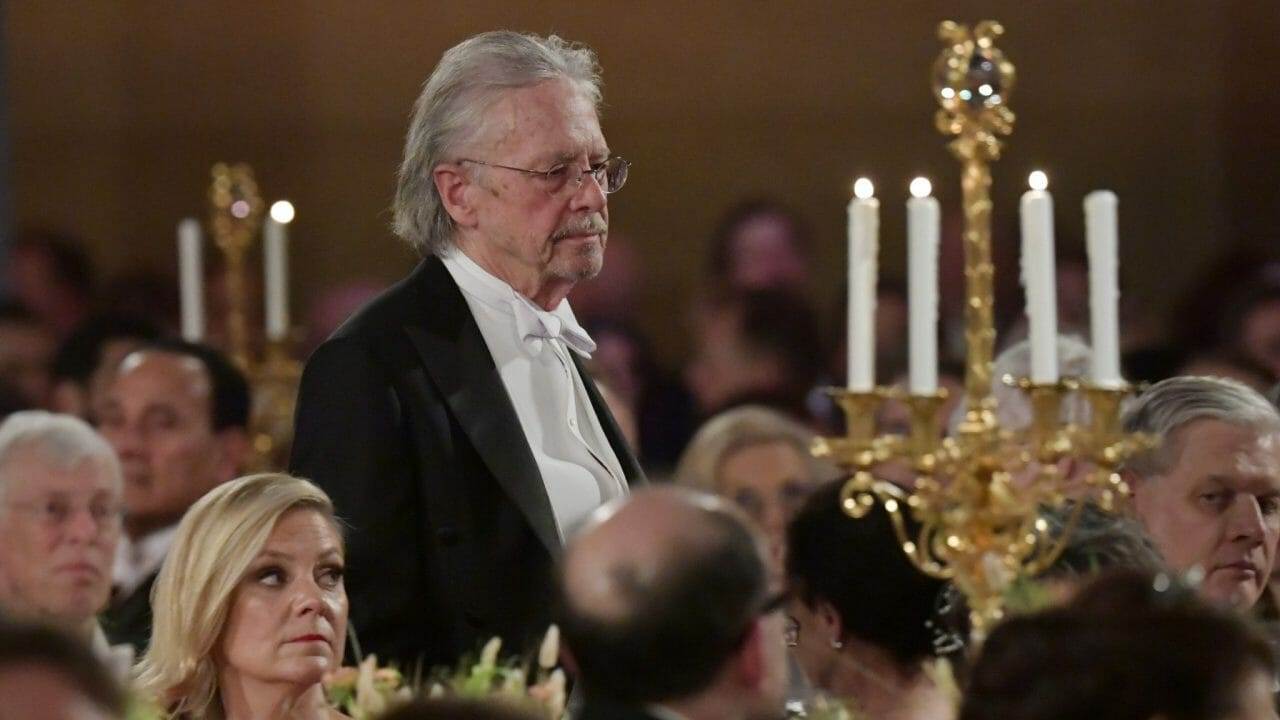 Peter Handke at the Nobel banquet at the City Hall in Stockholm in December 2019. Photo: PA-EFE/

It begins with the words of an actor on stage who calls on anyone in the audience who identifies as “a fascist, homophobe or anti-Roma” to leave. The stage is simple – a platform in the shape of a grave, footprints dotted around it.

The scene clearly evokes the misery of the 1990s, when roughly 140,000 people died in wars in Croatia, Bosnia and Kosovo.

Handke, whose mother was from Slovenia, questioned the responsibility of Bosnian Serb forces for atrocities committed during their 1,425-day siege of Sarajevo and, when the wars in Bosnia and Croatia were over, published a book in 1997 called, ‘A Journey to the Rivers: Justice for Serbia’. He has spoken in support of Bosnian Serb wartime political leader Radovan Karadzic and military chief Ratko Mladic, both convicted of war crimes, including genocide.

In June 1999, days after Milosevic was forced to pull his forces from Kosovo after 11 weeks of NATO air strikes to halt the killing and expulsion of ethnic Albanian civilians, Handke received a Yugoslav passport.

Seven years later, when Milosevic died in his cell in The Hague while standing trial for war crimes, including genocide, the writer delivered a speech at Milosevic’s funeral in his hometown of Pozarevac.

In the play, one actor asks what would have happened had a writer such as George Orwell delivered a eulogy at the grave of Adolf Hitler.

A human being first 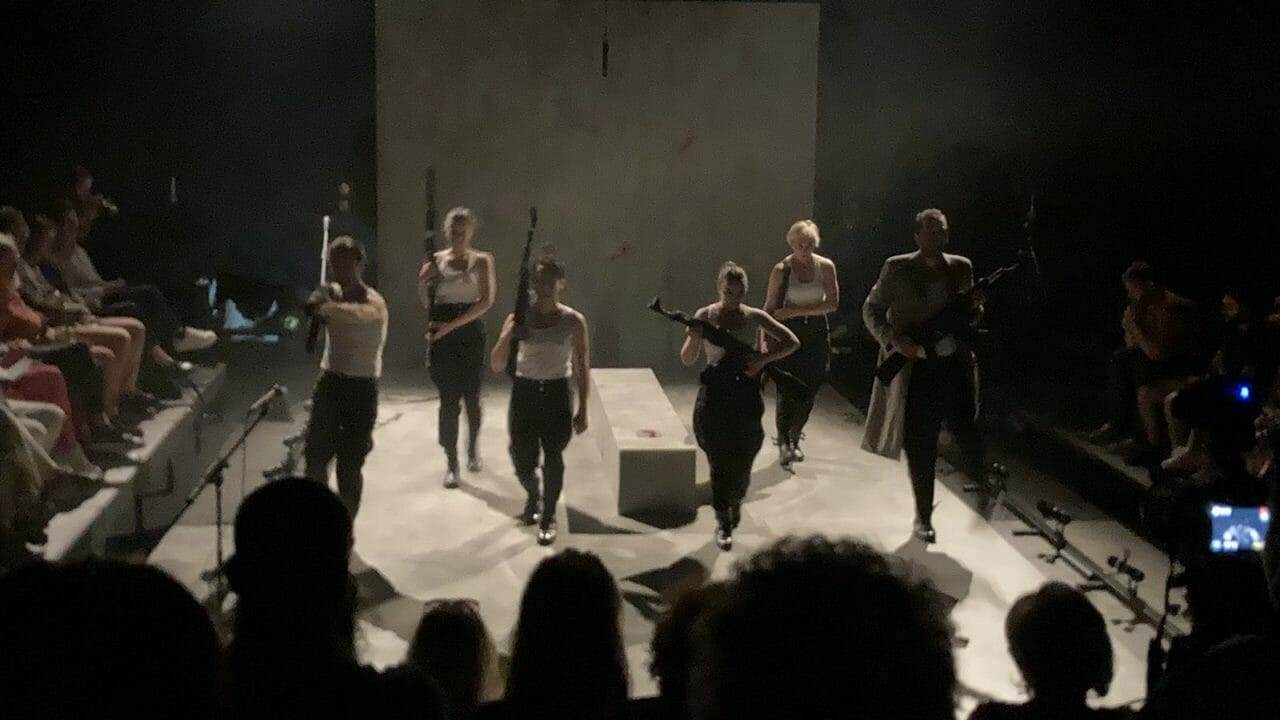 The Handke Project play at the Oda Theatre in Pristina on June 3. Photo: BIRN

The Swedish Academy defended its choice of Handke, a critically-acclaimed novelist, essayist and dramatist as well as a writer on the 1987 Wim Wenders film Wings of Desire. It is not within the Academy’s mandate “to balance literary quality against political considerations,” it said; Handke himself declined to discuss the controversy, remarking, “I like literature, not opinions.”

Rrustemi Neziraj’s play, however, takes as its starting point precisely the question of appreciating art by an artist who has “trampled on the limits of basic human dignity.”

“We are not looking at Handke as a writer, but as Handke as a phenomenon of European hypocrisy and ignorance,” she told BIRN.

One of the cast, Ejla Bavcic from Bosnia, said that an artist cannot hide behind his or her art.

“I think that we are first human beings and after that, we are artists, or whatever we are,” Bavcic told BIRN minutes after the premiere and clearly exhausted by the effort and emotion of the performance.

“At some point, you have to reveal yourself, what you are, if you are good or bad. You can’t hide or you can’t lie yourself with the art.”

Besides Bavcic, the cast of The Handke Project includes Kosovo-born French actor Arben Bajraktaraj, Adrian Morina and Verona Koxha from the Kosovo National Theatre, Anja Drljevic, who lives in Belgrade but is originally from Montenegro, and Klaus Martini from Italy.

The process itself was complicated by the legacy of Yugoslavia’s bloody collapse.

Due to the fact that Bosnia, thanks to Bosnian Serb objections, does not recognise Kosovo, Rrustemi Neziraj said it was a “struggle” to secure a Kosovo visa for Bavcic.

Then three Serbian members of the cast left the project, “because they considered this a sensitive topic.”

The dramatist on the project, however, is the prominent Serbian playwright Biljana Srbljanovic, while the play is scheduled to appear at Belgrade’s Bitef Theatre on June 9 and 10, before travelling to Italy, Germany and Bosnia.

Previous cultural events that address Serbia’s role in the wars of the 1990s have sometimes been met with protests in Belgrade by right-wing nationalists.

Rrustemi Neziraj said she hoped the audience would leave with a “good impression”, but not necessarily that it would “agree with what we say on stage.”

“And of course, if the audience goes out irritated at the stupidities of Peter Handke and the Nobel Committee, that would be ideal,” she said. “But they can also go out irritated at our approach.”

“I wouldn’t like for them to go out of the show relaxed and enthusiastic for the ‘perfect world in which we are living.’”

“All sorts of reactions are legitimate, as long as they are not violent.”