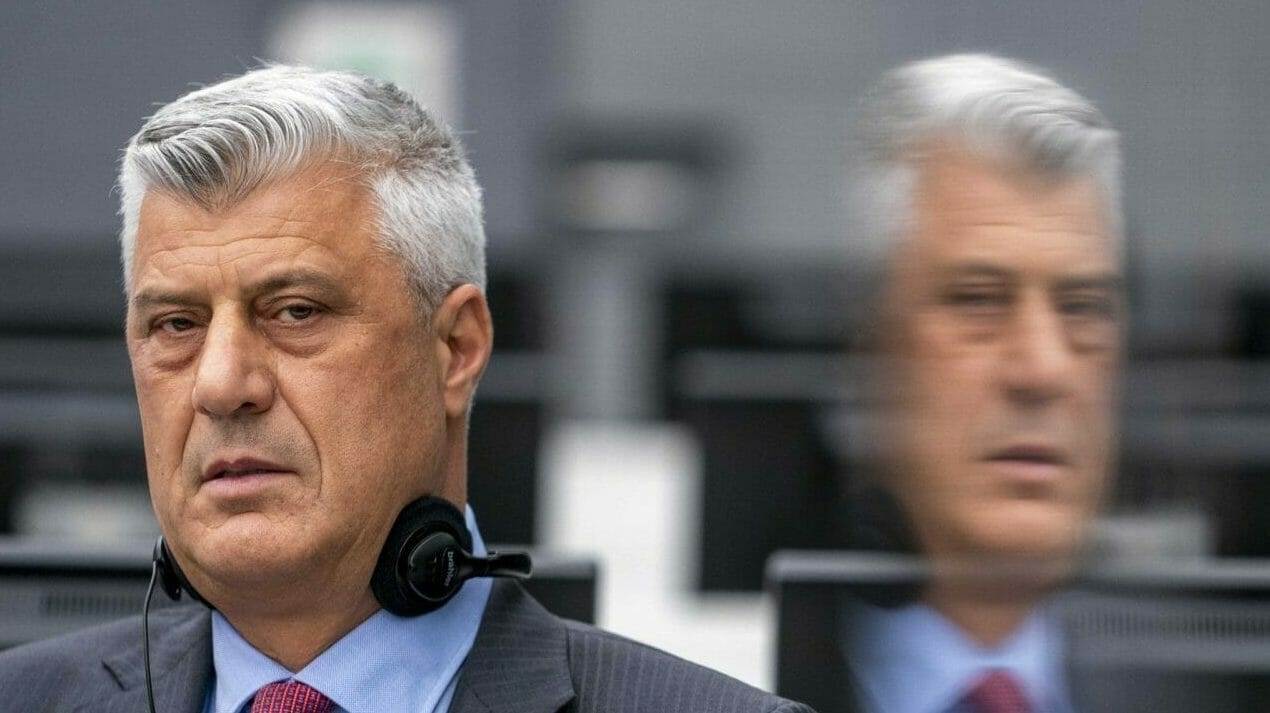 Hashim Thaci in the courtroom in The Hague in November 2020. Photo: EPA-EFE/JERRY LAMPEN.

Kosovo’s former President Hashim Thaci and former head of parliament Kadri Veseli pleaded not guilty at a pre-trial hearing on Tuesday to new charges filed by war crimes prosecutors at the Kosovo Specialist Chambers in The Hague.

Veseli also said he is pleading not guilty and asked the court for a swift start to the trial process.

“I have read [the amendments] and I wish the trial starts soon so I have the right to express my position and innocence before Kosovo citizens, KLA fighters and this honourable court,” Veseli said.

Last week, the Kosovo Specialist Prosecutor’s Office added fresh war crime charges to the indictment of Thaci, Veseli and two other wartime KLA leaders turned politicians who have been awaiting trial in detention in The Hague since November 2020.

The updated indictment says that between July 1998 and September 1998 and around April 28 or 29, 1999, certain KLA members detained at least 12 people without due process of law in the village of Budakova/Budakovo in Kosovo’s southern municipality of Suhareka/Suva Reka.

“Detainees, who were held for varying periods of time, were physically restrained, and held in locked rooms and under armed guard. Immediately following detention in Budakova/Budakovo, at least one of the detainees was transferred to Semetishta/Semetiste and also detained there between around 19 to 20 August 1998,” the updated indictment says.

“Detainees were hit all over their bodies. Detainees, including at least one LDK [Democratic League of Kosovo political party] supporter, were interrogated about and accused of associating, collaborating, or assisting Serbs and Serbian authorities,” it adds.

The updated indictment also says that in late June and July 1999, certain KLA members detained at least three people without due process of law at a guerrilla headquarters located in a former boarding school and dormitory in the eastern town of Gjilan/Gnjilane and subjected them to severe beatings and psychological abuse.

Thaci and Veseli are accused alongside the former head of the parliamentary group of the Vetevendosje Movement party, Rexhep Selimi, and the chairman of the national council of the Social Democratic Initiative (NISMA) party, Jakup Krasniqi, who also were senior KLA leaders during 1998-99 war.

The indictment contains ten counts and lists their alleged offences as “war crimes of illegal or arbitrary arrest and detention, cruel treatment, torture, and murder, and the crimes against humanity of imprisonment, other inhumane acts, torture, murder, enforced disappearance of persons, and persecution”.

It says that the crimes were committed “from at least March 1998 through September 1999”. All four men were senior figures in the KLA during the war and Thaci was the guerrilla organisation’s political leader.

Thaci, Veseli, Selimi, and Krasniqi are accused of being responsible for crimes committed by themselves and other former members of the KLA in various parts of Kosovo but also in northern Albania, “against hundreds of civilians and persons not taking part in hostilities”.

Most of the crimes were committed in detention centres in 17 municipalities in Kosovo and two districts of Albania, Kukes and Has.