Brutal attacks by warlord Arkan’s Serb paramilitaries on unarmed civilians living in the city of Bijeljina, captured in photographs that shocked the world, signalled the start of the war in Bosnia and Herzegovina 30 years ago.

Dzenita Mulabdic and her husband Muhamed were living a contented life in the north-eastern Bosnian city of Bijeljina in 1992, looking forward to arrival of a new baby. Their son Adnan was two-and-a-half and Dzenita was pregnant again.

Mulabdic remembers the exact moment when things changed for them after hearing Muhamed’s father said he could sense a strange atmosphere in the city and told them to “go home as soon as possible”.

Walking through the town, they heard gunshots. “I felt that my Muhamed was very nervous, but we remained at the apartment. Everything was normal except that we heard the occasional gunshot,” Mulabdic said.

At the start of April 1992, they moved to her husband’s parents’ house. During the call to prayer from a nearby mosque on April 2, soldiers knocked on their door and the door of their neighbours Redzep and Tifa Sabanovic. As they were coming out of the house, Mulabdic said that the Sabanovics’ son Admir walked out in front of her.

“They hit him with a rifle butt and took him away. When I walked down the hall, I saw a puddle of blood. I automatically went to their entrance, and when I looked around, I saw Redzep lying face-down on the right, his head all covered with blood. Tifa wanted to go to him, but at that moment there was a burst of gunfire from the mosque across the street,” she said.

Mulabdic expected the soldiers to shoot her too, but they sent her back inside when she said she was pregnant.

“I entered the house and saw it was full of soldiers. They had no masks, so it could be seen clearly that they were Arkan’s men,” she recalled.

The Serb fighters – Arkan’s men, members of notorious Serbian criminal Zeljko ‘Arkan’ Raznatovic’s paramilitary unit – let her and her husband go outside, where she saw her neighbours Redzep and Tifa lying on the pavement.

Photographer Ron Haviv’s picture of Redzep and Tifa Sabanovic lying there as one of Arkan’s men kicks at their bodies would later become one of the best-known images of the Bosnian war.

“I heard Tifa crying, which means she wasn’t dead yet,” said Mulabdic. The fighters then took her and some other women into another house.

“After that we heard gunshots. That’s when they probably killed my Admir and my Muhamed,” she said.

She said that she gave evidence about what she saw to Hague Tribunal investigators, but no one has been convicted of killing her husband. “It hurts that no one has ever answered for that,” she said.

Like many other Bosniaks who were expelled in 1992, she has never returned to the house she left back.

“I do visit Bijeljina, but everything has changed there. It is no longer the same town. Only a few people have returned there, because streets have even been named after people who committed crimes [during the war],” she explained.

‘The final rehearsal for the war’ 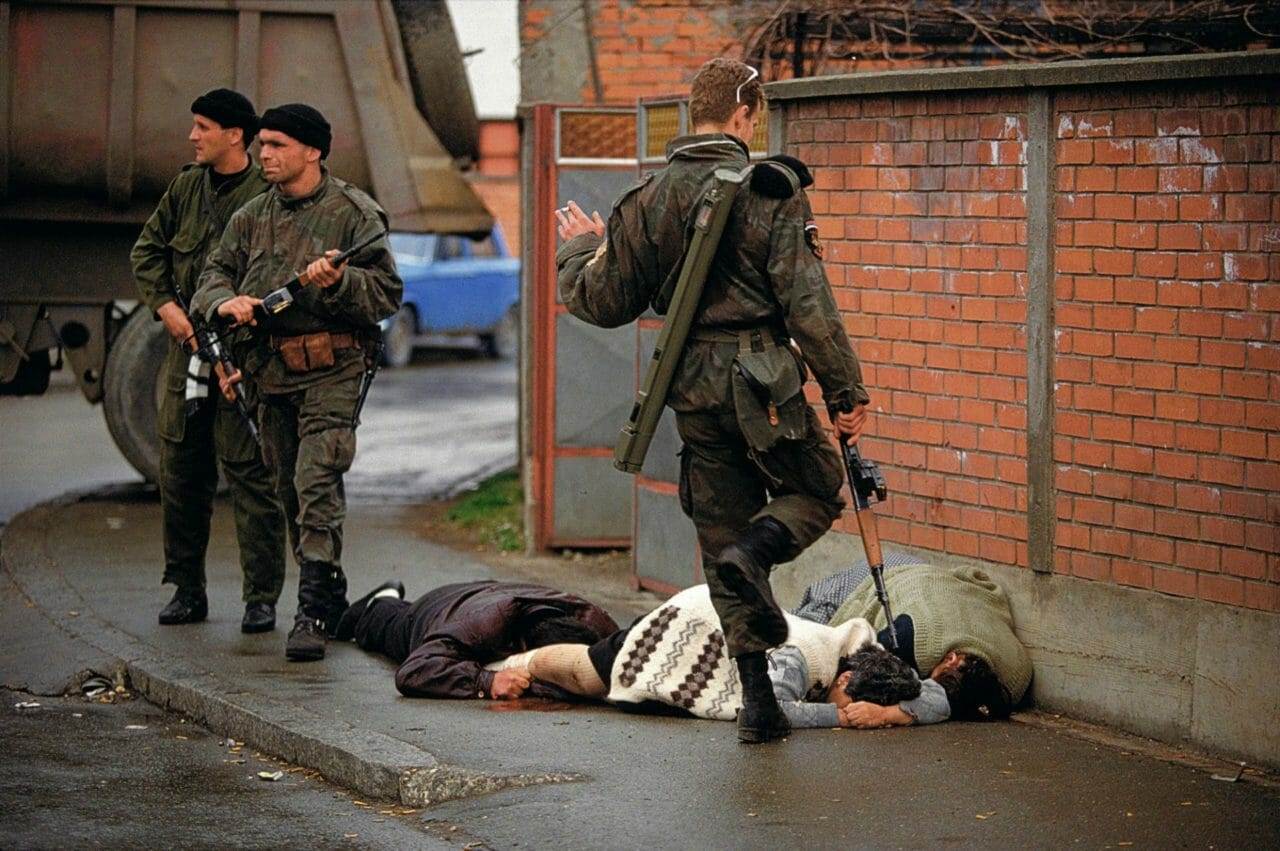 Ron Haviv’s photograph of one of Arkan’s fighters with the bodies of victims of Serb paramilitaries in Bijeljina in April 1992. Photo: Ron Haviv/VII.

The violence in Bijeljina, near Bosnia’s border with Serbia, marked the beginning of hostilities in the Bosnian war. The siege of Sarajevo started shortly afterwards.

“Bijeljina was the final rehearsal for the [Bosnian] war. They did in Bijeljina what they later did in other cities,” said journalist and author Jusuf Trbic, who was the director of Radio Bijeljina at the time, and whose book ‘Masters of the Dark’ was later used in evidence at the trial of Radovan Karadzic.

One of the longest streets in Bijeljina, which runs from near where Dzenita Mulabdic lived to the downtown area, has since been named after Arkan’s unit, the Serbian Volunteer Guard.

Raznatovic was indicted by prosecutors in The Hague, but was murdered in Belgrade in 2000 before he ever came to trial. Only one member of his unit has ever been convicted.

Trbic said that naming a street after the unit, also known as Arkan’s Tigers, reminds him of Ron Haviv’s picture of dead bodies in front of the Sabanovic family’s house. Trbic saw the corpses himself that day when he was forcibly taken to Arkan’s headquarters.

“When I saw those people as I passed by, I trembled in my shoes,” he said, pointing to the spot where Haviv took the photograph. “Because of that photo, which was a true symbol of the war against Bosnia, the case of Bijeljina became widely known.”

‘Trucks came to take us away’

Despite the existence of evidence like Ron Haviv’s photographs, Trbic is dissatisfied about how few people have been prosecuted for war crimes in the Bijeljina area, particularly those committed at the nearby Batkovic detention camp, which was established by Bosnian Serb forces on April 1, 1992.

According to the Bosnian state prosecution, 1,700 non-Serb civilians and prisoners of war were held at the camp. The Association of Detainees from Tuzla Canton estimates that 80 of them were killed.

Among those taken to the Batkovic camp in September 1994 was Mehmed Djezic from the town of Janja, on the outskirts of Bijeljina. He was separated from his wife and two sons and spent nearly 11 months detained at the camp.

Before that, he was first detained in a school in Brijest, near Priboj: “There was no water. The conditions were atrocious. Seven days later, trucks came to take us to another location, but we didn’t know where,” he recalled.

He and more than 100 other prisoners were then taken to Suho Polje, near Bijeljina, where they were held for five days. “During those five days, we were only given one slice of bread each and two or three small pears. They only brought us drinking water. We slept on the concrete floor,” Djezic said.

Finally he was moved to the Batkovic detention camp. “The living conditions were dire, there were mice crawling over us. The toilets were a disaster, the food rations were meagre,” he said. “People were taken away every day [to do forced labour]. A truck would come and they would just say they needed 20 people. They picked out those people – ‘you, you and you’ – and took them to the front lines.”

Bosnian courts have only convicted a few people of committing crimes at the Batkovic detention camp. One of them was Bosnian Serb soldier Gligor Begovic, who was found guilty of participating in murdering three civilians and beating and sexually abusing others. The judge said witnesses described Begovic as “the most bloodthirsty of all the guards” at the camp.

A Serbian court convicted three Bosnian Serb soldiers, Dragan Jovic, Zoran Djurdjevic and Alen Ristic of the murder, rape and robbery of Bosniaks in Bijeljina in 1992.

At the International Criminal Tribunal for the Former Yugoslavia in The Hague, crimes committed in Bijeljina were included in the verdicts convicting Bosnian Serb wartime officials Radovan Karadzic, Momcilo Krajisnik, Biljana Plavsic and Mico Stanisic.

Mirza Buljubasic, assistant professor at the Criminology Department of Sarajevo University’s Faculty of Criminal Justice, Criminology and Security Studies, said that the Hague Tribunal’s investigations and verdicts contain evidence that could still be used by prosecutor’s offices in Bosnia and Herzegovina to bring cases for crimes committed in Bijeljina – if there is the will to do this.

“It cannot be said that all cases are impossible to solve due to the lack of evidence, but due to limitations and difficulties in the administration of justice and the way I which those responsible are dealing with the crimes and the victims – their passivity and refusal to call crimes by their real name and offer satisfaction to the victims. There is an inability to come to terms with the past,” Buljubasic said. 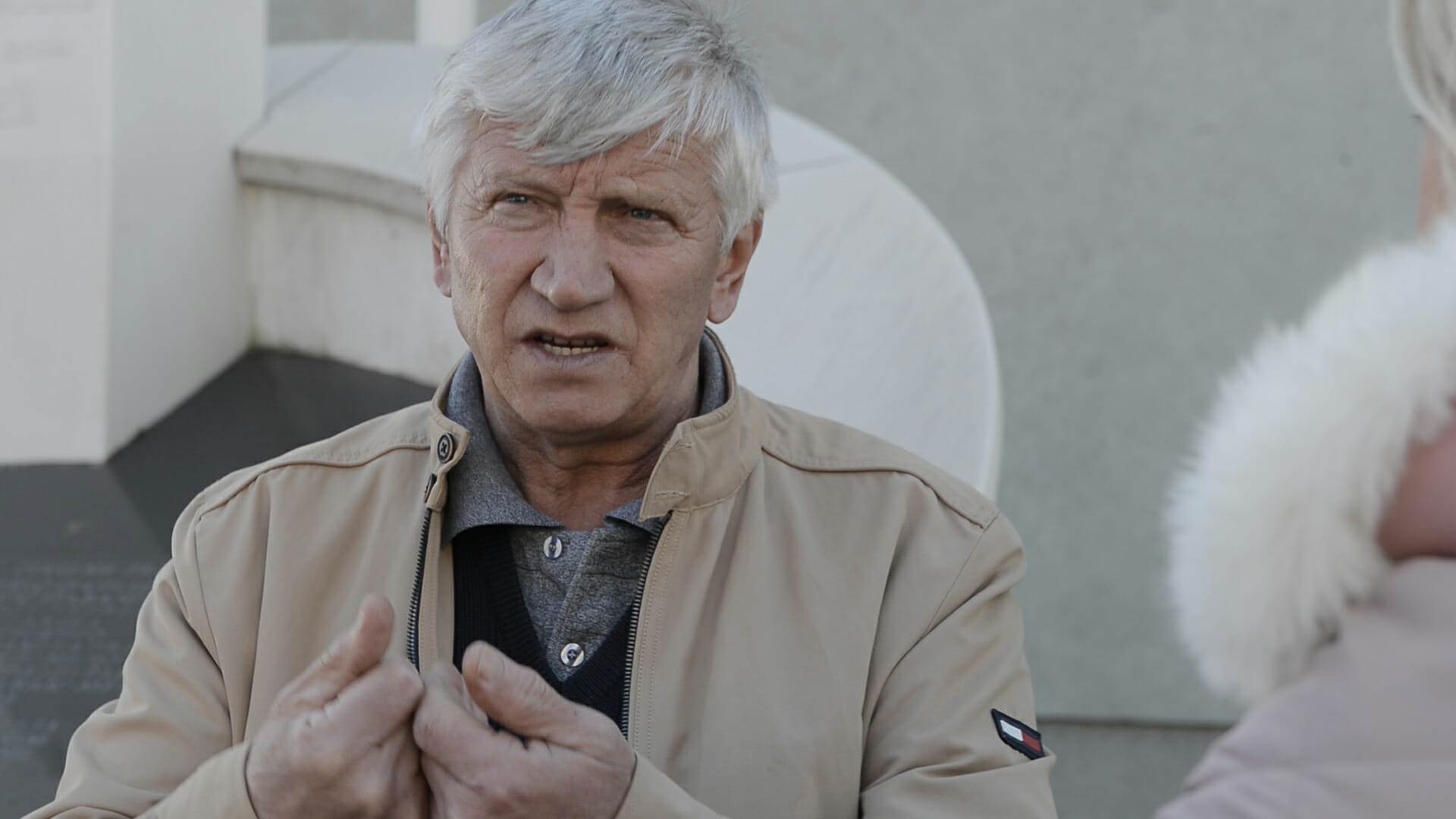 Former detainee Mehmed Djezic was one of the first non-Serbs who returned to the town of Janja, near Bijeljina, after the war ended.

“As I was a detainee registered by the International Red Cross, I could have gone somewhere else, but I didn’t want to. I always aspired to return. I returned with a clean conscience and clean hands, because I did no harm to anyone. Those harmed me should be ashamed, not honoured,” he said.

The local authorities in Bijeljina honoured warlord Arkan’s Serbian Volunteer Guard has a street named after it, but war victims have no memorial and their suffering is not officially commemorated.

“Just the opposite – crimes and criminals are glorified through historical revisionism, and collective traumas are perpetuated and thrown forward onto the post-war generation,” said Buljubasic. “In this way, Bijeljina is not much different from the rest of Bosnia and Herzegovina, although it does have its specific characteristics.”

Djezic said he feels uncomfortable when he has to walk down Serbian Volunteer Guard Street: “It is not very pleasant.”

He said that the worst thing about a spate of ethnically-motivated incidents in Janja last year, when people opened fire from a convoy of cars near the local mosque, and vandals sprayed a Serb logo on the mosque, was that young people were involved, showing that narratives of hatred are still alive.

“More than anything I’m afraid for the young people, for my children and grandchildren,” he explained.

Journalist Jusuf Trbic warned that non-Serbs who have returned to this Serb-majority city since the war ended are leaving again, partly because war crimes suspects are still living freely and there is no longer any faith in the authorities to bring them to justice.

“I just saw a man in the street who used to be in Arkan’s [Serbian Volunteer] Guard and who had the task of killing captured and detained civilians,” Trbic said.

“He was sitting peacefully in the city centre, enjoying the sun.”