Russia’s invasion of Ukraine is grave, severe and defined by one characteristic only: aggression,” Agnes Callamard, secretary-general of Amnesty International, said on Wednesday.

“Russia is invading into the heart of Ukraine, seeking to depose its lawfully elected government, with a real and potential massive impact on civilians’ lives, safety and well-being; its acts cannot remotely be justified on any of the grounds that Russia has offered.”

Since February 24, when Russia invaded Ukraine, there have been a series of reports of attacks on residential areas, indiscriminate shelling and other alleged violations of international humanitarian law.

As Western countries stepped up economic sanctions against Russia and a UN General Assembly resolution condemned the invasion, the chief prosecutor at the International Criminal Court, Karim Khan, announced on Wednesday that he had decided to “immediately proceed with active investigations” into possible war crimes in Ukraine.

Khan said that 39 of the court’s member states asked for a probe into possible crimes committed during Russia’s ongoing invasion.

“These referrals enable my office to proceed with opening an investigation into the situation in Ukraine from 21 November 2013 onwards, thereby encompassing within its scope any past and present allegations of war crimes, crimes against humanity or genocide committed on any part of the territory of Ukraine by any person,” Khan said in statement.

An advance team of investigators was deployed from The Hague on Thursday to look for evidence of war crimes, crimes against humanity and acts of genocide by anyone involved in the conflict, the ICC prosecutor told Reuters news agency.

The announcement raised hopes among some Ukrainians and human rights campaigners that senior officials of Vladimir Putin’s regime could one day be prosecuted in court.

“The ICC prosecutor’s decision to open an investigation sends a message to current and would-be rights abusers, no matter how powerful, that justice may one day catch up with them,” said Balkees Jarrah, interim international justice director at Human Rights Watch.

Mark Kersten, consultant at the Wayamo Foundation and senior researcher at the Munk School of Global Affairs, said that the decision by so many states to ask for an investigation was “significant and unprecedented”.

“I think an investigation can’t happen a second too soon,” he said. 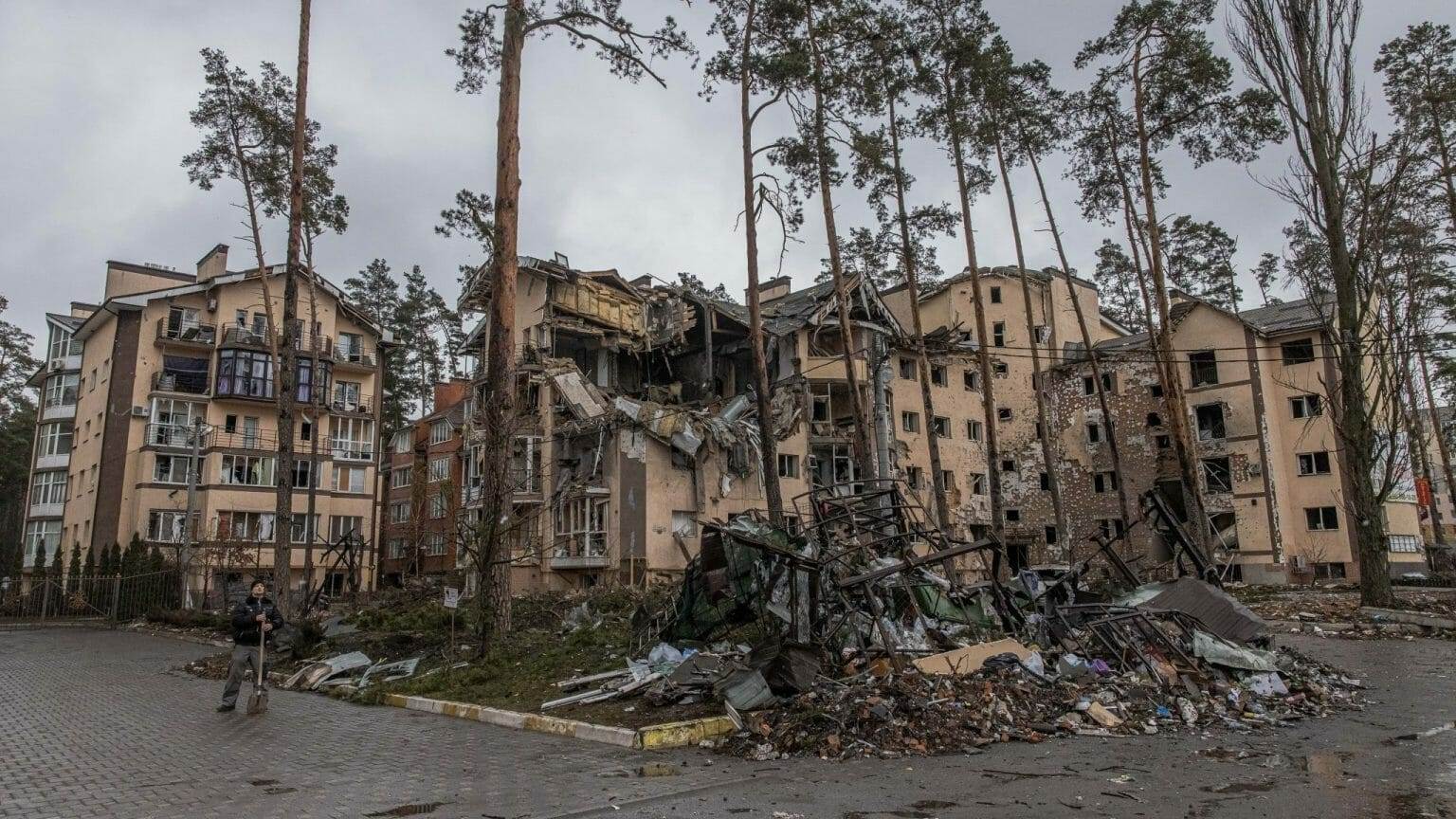 Ukraine is not an ICC member state but it approached the Hague-based court in April 2014, saying that it would recognise the jurisdiction of the court “for the purpose of identifying, prosecuting and judging the authors and accomplices on the acts committed on the territory of Ukraine” from November 21, 2013 to February 22, 2014.

On November 21, 2013, protests erupted in Kyiv after Ukraine’s pro-Russian president at the time, Viktor Yanukovych, decided to suspend negotiations about a trade deal with the EU and halt Ukraine’s singing of an Association Agreement with the European bloc, which would have represented a key move by this former Soviet republic away from Moscow’s influence and towards the West.

The pro-European protests continued for months, and after Yanukovych’s attempt to crush them with a violent crackdown failed, he fled to Moscow. Russian President Vladimir Putin responded to this setback for the Kremlin’s interests by annexing Ukraine’s Crimean peninsula.

Moscow also sponsored and armed pro-Russian fighters in the Donetsk and Luhansk areas of eastern Ukraine, who then declared their own so-called ‘people’s republics’ in defiance of the central government. Their conflict with the Ukrainian Army has continued since then, despite ceasefires and peace agreements.

Ukraine approached the ICC again in April 2015, saying that it recognises the court’s jurisdiction for crimes that happened after February 20, 2014.

British lawyer Wayne Jordash, managing partner at the Global Rights Compliance law firm, said that since 2014 there have been “a range of crimes committed in Crimea by the Russian regime, including war crimes and also crimes against humanity”. The same has happened in the Russian-backed areas of Donetsk and Luhansk, he added.

Since the outbreak of the war, television, online media and social media have been disseminating video recordings from Ukraine, showing rockets hitting residential buildings, explosions in cities and even pictures of cluster munitions in populated areas.

Jordash said that these images, combined with witness testimonies and open source data, could be used as evidence in a future war crimes case.

Kersten insisted that “time is of the essence, as [evidence] begins to degrade almost immediately.

“The gold ticket would, of course, be written orders from Putin or those around him directly to attack civilians or commit other war crimes,” he explained.

“That will be hard to find, but perhaps in the coming days, weeks, and months, people in his inner circle will turn on him and provide evidence and testimony of his alleged crimes. One can hope,” he added. 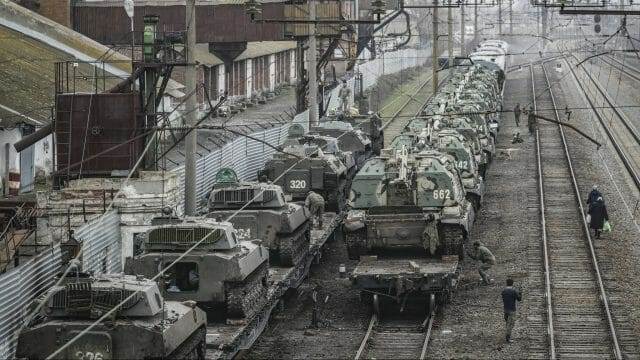 Russian armoured vehicles at a railway station in the Rostov region of Russia, not far from the Ukrainian border, on February 23. Photo: EPA-EFE/STRINGER.

Ukraine is already bringing its own case against Russia at the International Court of Justice in The Hague, with initial hearings set to start next week.

Russian President Vladimir Putin said on February 24 that he had “decided to conduct a special military operation” in Ukraine, in line with the “treaties of friendship and mutual assistance” that Russia had ratified with the Donetsk and Luhansk People’s Republics two days earlier.

“Its goal is to protect people [in Donetsk and Luhansk] who have been subjected to bullying and genocide by the Kyiv regime for eight years,” Putin alleged, without providing any evidence of genocide.

Three days later, Ukraine started proceedings against Russia at the International Court of Justice, accusing Moscow of falsely interpreting the 1948 Convention on the Prevention and Punishment of the Crime of Genocide in order to support its argument for an invasion.

It urged the ICJ to instigate provisional measures that would “protect the people of Ukraine by ordering Russia to suspend its senseless military operation, which is based expressly on Russia’s false and absurd claim to be taking action to prevent and punish acts of genocide”.

Marko Milanovic, a professor of Public International Law at the University of Nottingham, said that the Ukrainian authorities’ case is unusual.

“They do not claim that Russia is committing genocide by its military actions in Ukraine, as such, they say that ‘Russia falsely accused us of genocide against the Russian population in Donbas [eastern Ukraine] and based on that false claim, they initiated all these military operations, which seems to be in bad faith’,” Milanovic told BIRN.

“This is a creative argument that has never been used in any similar dispute before,” he said, describing the Ukrainian case as “a kind of defamation lawsuit”.

If a state submits a request for provisional measures, as Ukraine has done, hoping that it could halt the Russian invasion, the court is able to make a decision on this within a few weeks, Milanovic added.

“In order to determine provisional measures, the court must establish that it has the so-called prima facie jurisdiction, so at first glance, without deciding finally on the issue of jurisdiction, the court will say: ‘This seems good enough to us, it is not something that is totally outside the scope of the Genocide Convention, that there is a valid dispute… and that is why we have the authority to adopt these provisional measures,” he said.

The court must also establish that there is an immediate danger or risk to one of the parties in the dispute, and “Ukraine will say that what is happening represents that risk”, he continued.

“So, if you ask me whether Ukraine has good enough arguments for that first step, the answer is probably yes – I cannot be 100 per cent sure, but it is likely that the court will make a positive decision,” he said.

ICJ hearings about provisional measures in the case are scheduled for Monday and Tuesday. 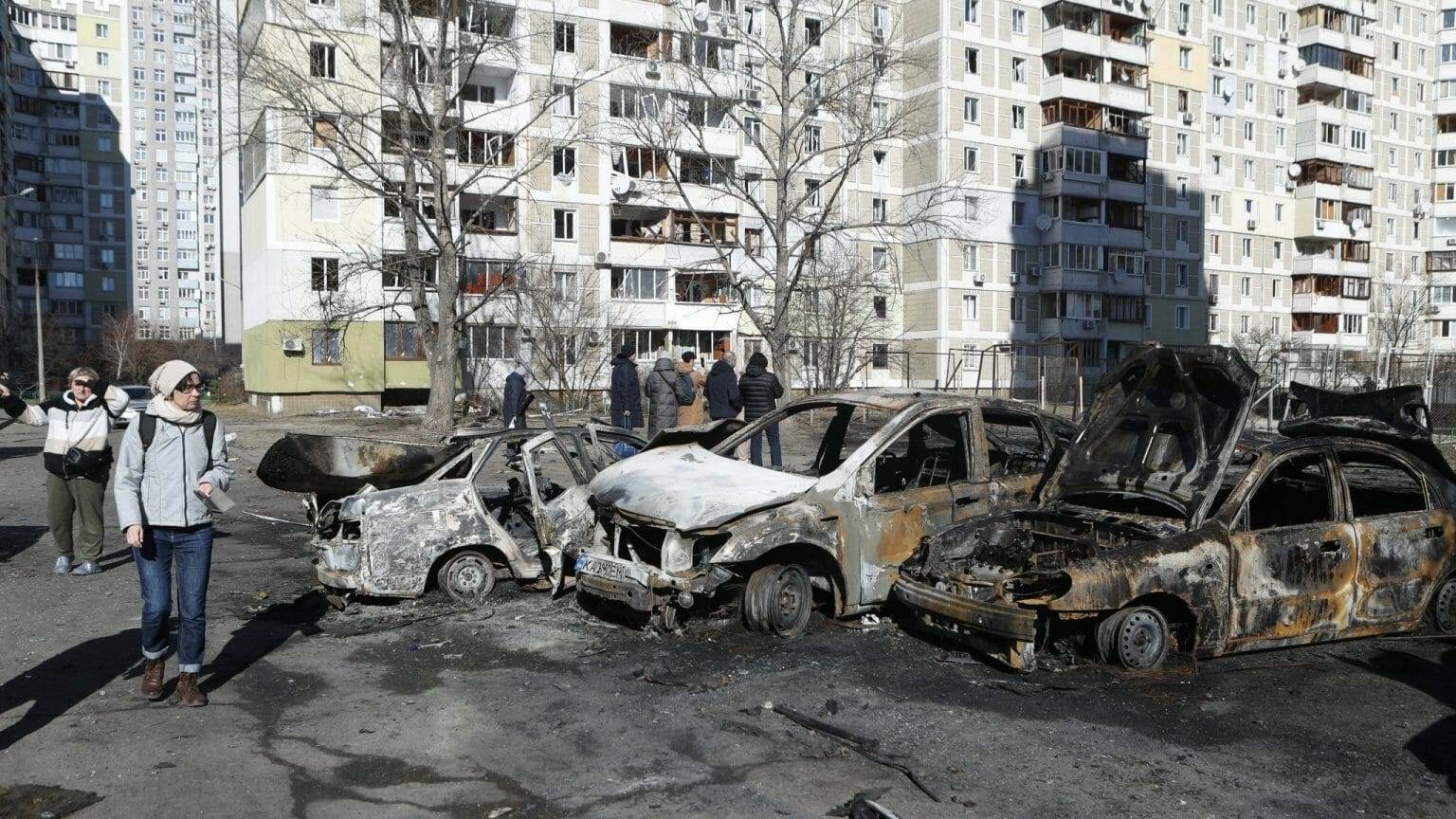 Burned cars a day after the shelling of a residential area of Kyiv on February 28. Photo. EPA-EFE/SERGEY DOLZHENKO.

Time will be a crucial factor in both the ICC and ICJ cases, legal experts said.

Wayne Jordash, who has experience in cases at the International Criminal Tribunal for the Former Yugoslavia in The Hague, hopes that any process will be shorter than some of the Yugoslav war cases that dragged on for two decades.

He warned however that the ICC prosecutor is “massively underfunded and under-resourced” for such a large investigation.

“In an ideal world, you would need 50 to 100 investigators working on the case” due to the sheer size of Ukraine and the extended period of several years in which crimes were allegedly committed, he said.

He argued that ICC member states “need to step up and increase their funding because without it, the referral by the 39 countries will just become like an empty gesture, with proceedings and the investigation not able to be effective”.

Milanovic said that as the war goes on in Ukraine, developments on the ground could scupper Kyiv’s case, particularly if Moscow manages to install a puppet government.

“The danger that exists here, I think the most terrible thing here, is that one outcome of this whole situation could be that Russia destroys the Ukrainian government and replaces the regime, and then the new regime submits a new request to the ICJ and says ‘We are giving up lawsuit’… and then it is up to the ICJ to determine whether this new regime can represent Ukraine or not,” he explained.

“That is, if you ask me, a very possible sequence of events,” he cautioned.