Bosnian police are seeking US citizen Robert Rundo, a founder of an alleged white su-premacist organisation who faces accusations of inciting violence in his home country, after he was reportedly expelled from Serbia. 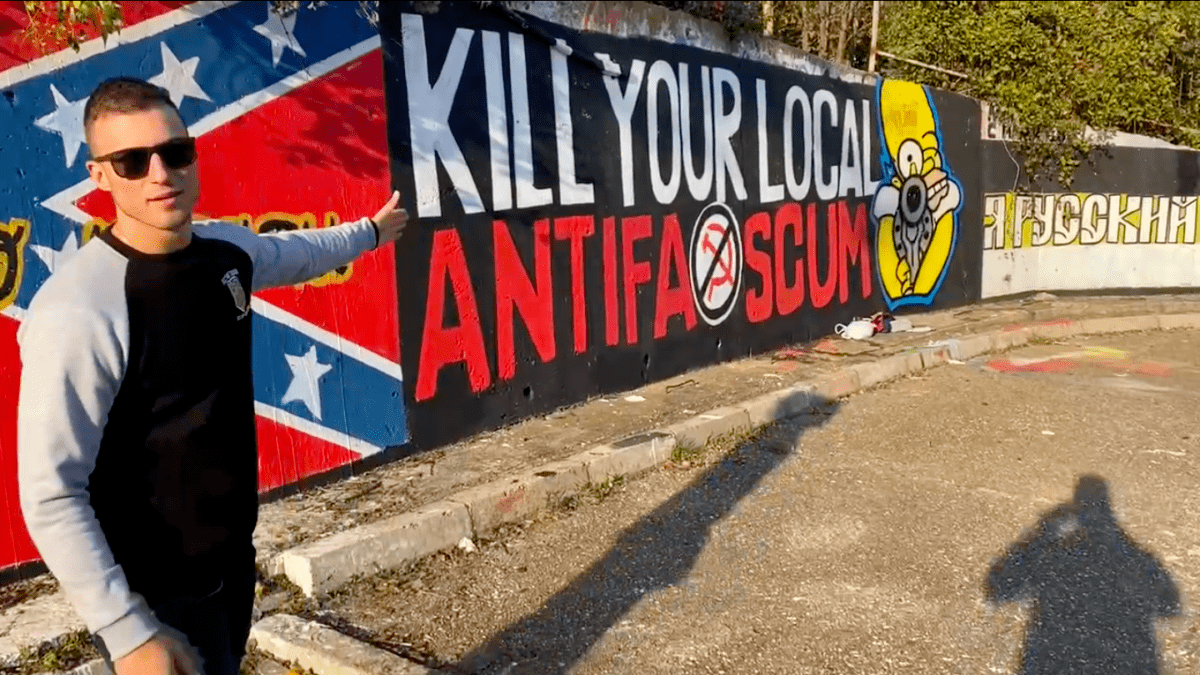 A screenshot from video from Rundo’s Telegram channel, showing him in Belgrade

Bosnia and Herzegovina’s Service for Foreigners’ Affairs told BIRN that police are searching for Robert Rundo, an alleged white supremacist who is wanted in the US for inciting a riot and taking part in violence.

Rundo, one of the founders of a US far-right organisation called Rise Above Movement, entered Bosnia last month after being expelled from Serbia, according to Serbian media reports.

Rundo and others are accused of physically assaulting people who were rallying against then US President Donald Trump in California in 2017.

Investigative website Bellingcat reported that in 2020, Rundo was living in several European countries and, while in Serbia, recorded videos with far-right messages.

Svevlad Hoffman, an adviser to the Bosnian Border Police director, said that Rundo entered Bosnia via the Sepak border crossing near Zvornik on February 11.

He first attempted to enter Bosnia and Herzegovina via the Raca border crossing on February 10, but was turned back as he did not have a negative PCR test, Hoffman said.

“At that point, the Border Police did not have at their disposal the information that Rundo posed a threat to national security, because the OSA [Bosnia’s Intelligence and Security Agency] did not provide the information in time,” Hoffman insisted.

BIRN has contacted Bosnia’s Intelligence and Security Agency early in March but received no comment by the time of publication.

Earlier this month, the US Federal Appeals Court ordered a lower court to annul a previous dismissal of the charges against Rundo and three other men, ruling that they could be tried for their roles in riots in California in 2017.

The Los Angeles Times reported that Rundo and the others are accused of rioting and conspiracy by recruiting and training people for violence and taking part in violence in 2017 in Berkeley, San Bernardino and Huntington Beach in California.

The FBI has alleged that Rundo was caught on video punching a police officer and assaulting people who were protesting against Trump.

According to the Counter Extremism Project, the Rise Above Movement was founded by Rundo in 2017 as a “white supremacist gang” involving mixed martial arts fighters.

The Counter Extremism Project said that Rise Above Movement members participated in a violent rally by white supremacists in Charlottesville in August 2017, during which a counter-protester was killed.

“RAM [Rise Above Movement] claims it wants to revive the ‘warrior spirit’ of the white male,” the Counter Extremism Project said.

After Rundo entered Bosnia, his ‘Active Club Podcast’ was broadcast at least once via the Rise Above Movement’s website, and he also made a guest appearance on the Australian far-right podcast ‘Voice of Zealandia’. BIRN was not able to confirm when he made the recordings.