Exhumation began last month at a fifth mass grave found in Serbia and believed to contain the remains of ethnic Albanians killed in the 1998-99 Kosovo war.

Some 250 kilometres south of Belgrade, not far from the border between Serbia and its former Kosovo province, is an open-pit mine called Kizevak, part of the Suva Ruda mine.

There are no road signs pointing to the mine, which is surrounded by forests and fields. Nor are there many houses on the way. But Kizevak is currently a hive of activity.

More than two decades since the 1998-99 Kosovo war, the mine last month gave up another gruesome secret of the conflict when investigators uncovered the remains of what are almost certainly Kosovo Albanians killed by Serbian forces and tossed into a mass grave to hide evidence of war crimes. Now, police secure the site and local and foreign experts inspect the ground.

It is the fifth mass grave found in Serbia since the fall of strongman Slobodan Milosevic in 2000, a little over a year after NATO bombs forced him to withdraw from Kosovo following a brutal counter-insurgency war. The remains of more than 900 Kosovo Albanians have been found so far, yet no one in Serbia has been held responsible for what was a systematic effort to conceal evidence of war crimes.

The process of exhuming the remains began on November 30, marking the climax of five years of painstaking research based on witness accounts and aerial images.

Representatives of Serbia, Kosovo and a number of international bodies visited the site on Friday. “Some 240 cubic metres of stone has been dug up at this location,” said Veljko Odalovic, head of the Serbian Commission for Missing Persons.

“In the coming weeks, following the joint hard work of the forensic team, more families will be able to close a very dark chapter in their lives,” said Fabien Bourdier, president of the Working Group on Missing Persons at the International Committee of the Red Cross, ICRC. 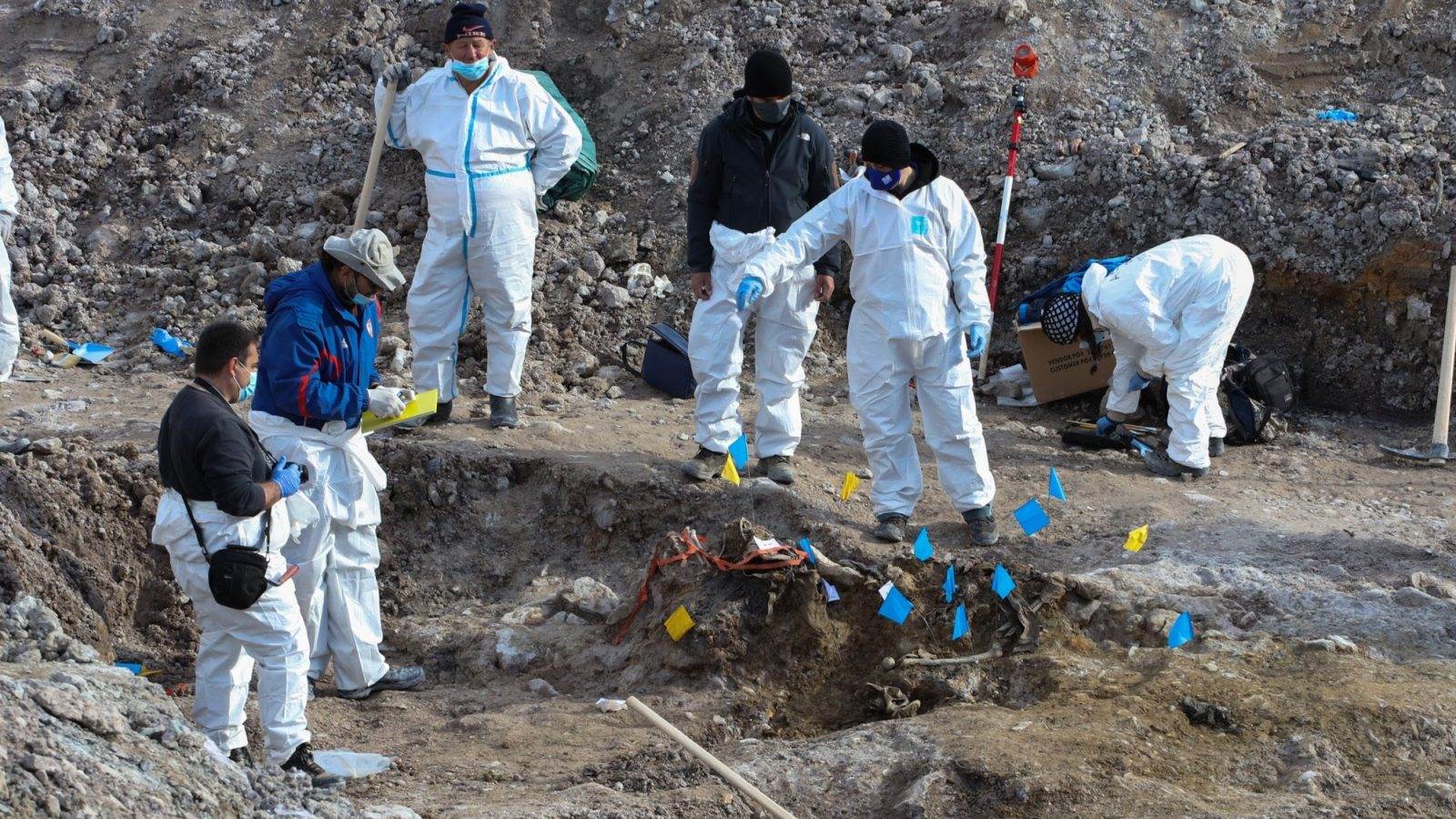 Some 1,640 people are still classified as missing from the Kosovo war, among them more than 1,100 Kosovo Albanians.

The search for bodies in Kizevak dates to 2015, the task made more difficult by the fact the site was still in use for several years after the war.

“Locating human remains in mass or clandestine graves is a complex procedure and rate of work can significantly vary depending on the location and available information,” said Matthew Holliday, head of the Western Balkans Program at the International Commission on Missing Persons, ICMP, which monitored the initial excavation of the site.

Krassimir Nikolov, exhumation coordinator at the European Union’s rule of law mission in Kosovo, EULEX, said that while witnesses were able to describe in detail the location, “they were not in a position to point it out in the field because the landscape of the site had drastically changed.”
“Therefore, it was impossible to identify the exact location based solely on witnesses’ accounts,” Nikolov told BIRN.

EULEX forensic archaeologist Javier Santana said the continued use of the site after the war had resulted in “drastic changes in the landscape” and witness statements alone were not enough to determine at which of the four or five different mine levels the remains were buried.

The “breakthrough”, Nikolov said, came at the end of last year when EULEX managed to compare aerial images of the open-pit mine from 1999, 2002 and 2020.

“After a thorough analysis, we identified the changes in the landscape and narrowed down the area of interest,” Nikolov said, eventually to a matter of metres. Santana told BIRN: “The aerial images showed us exactly in which levels the human remains are and how deep to dig.”

Near another mass grave 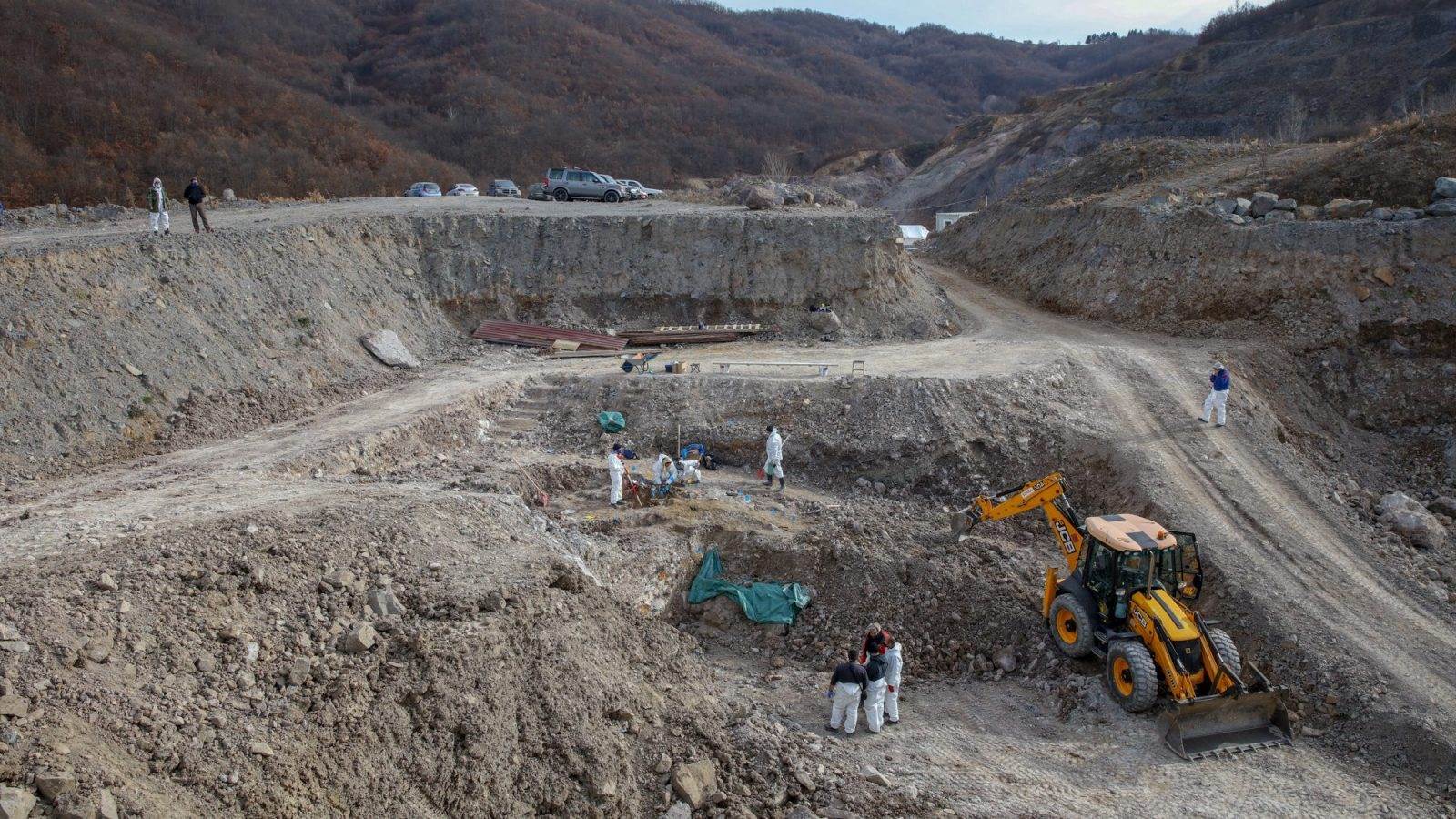 Kizevak is part of the former state-owned Suva Ruda zinc mine in nearby Raska. In 2007, the mine was sold to a company owned by prominent Serbian businessman Miroslav Bogicevic, who said he halted work at Kizevak before the investigation of the site began.

“We were digging, we came across ore and we were processing it,” Bogicevic told BIRN. “There was nothing to indicate that something like that could happen.”

The owner of MB Farmakom Concern, Bogicevic was arrested in 2014 on suspicion of bank fraud. He said he suspended work at Kizevak “because of this whole situation around me, around Farmakom, all these things. I’ve had a million problems since I was arrested.”

In February this year, the Serbian Commission on Missing Persons organised a joint visit to the location, and between February and March an upper layer of some three to five metres was removed, Nikolov told BIRN.

The COVID-19 pandemic slowed the work but in November the EULEX team was invited to return to the site “due to the suspected proximity to the level that could contain the human remains,” he said. Some of those remains were found on November 16.

The High Court in Belgrade has established a five-member expert court commission to work on the case, while representatives of Kosovo, EULEX, the ICMP and ICRC will also be present in the field.

The office of Serbian war crimes prosecutors has also begun a preliminary investigation and is waiting on expert analysis of the remains and any other material found at the location.

Kizevak is near the Rudnica quarry where a mass grave was found in 2013 containing the remains of 52 people, all Kosovo Albanians. The prosecutor’s office said it was also investigating Rudnica but was unable to provide any details.

In 2014, the International Criminal Tribunal for the former Yugoslavia in The Hague sentenced former senior Serbian police official Vlastimir Djordjevic to 18 years in prison in part for his role in concealing the bodies of ethnic Albanians killed in Kosovo, but no one has been held responsible in Serbia.