Recently-resigned President Hashim Thaci pleaded not guilty at the Kosovo Specialist Chambers in The Hague to allegations that he committed crimes against humanity and war crimes in Kosovo and Albania in 1998 and 1999. 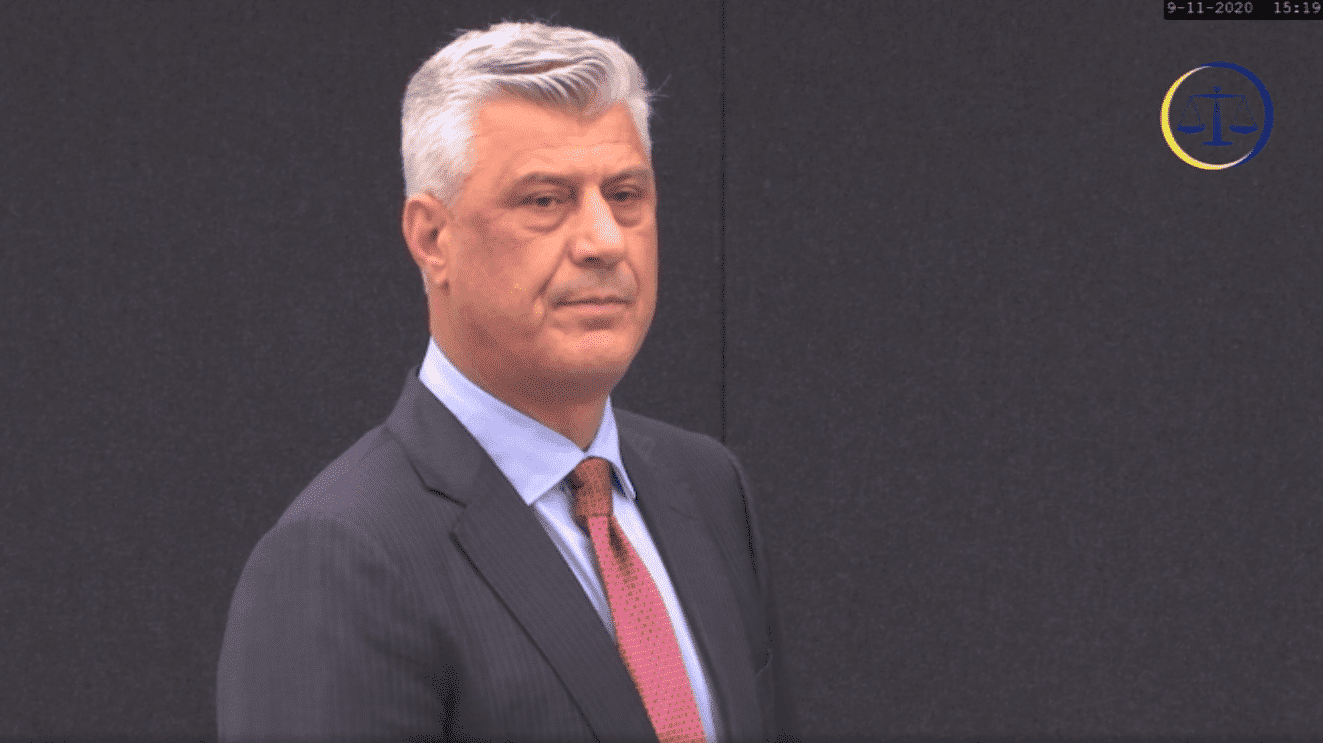 “I read them and I do not agree with any of them,” said Thaci, who stepped down as Kosovo’s president last week before he was sent to The Hague for trial.

“The indictment is completely without basis and I plead not guilty,” he added.

Thaci’s defence lawyer David Hooper complained to the presiding judge that the defence team received late notice of the indictment.

He also noted that allegations of organ-harvesting made by Council of Europe rapporteur Dick Marty in a report that eventually led to the establishment of the Kosovo Specialist Chambers are not in the indictment.

“Nothing in this indictment speaks of organ-harvesting… he [Thaci] knew the charges are nonsense and he assisted in setting up this court,” Hooper said, referring to the process of establishing the court under Kosovo’s legislation, which Thaci publicly supported.

“Instead we have a collection of incidents of out which many have either have been tried by the International Criminal Tribunal for former Yugoslavia or local courts in Kosovo,” he underlined.

The prosecutor in the case, Alan Tieger, known for previously leading the case against Bosnian Serb leader Radovan Karadzic before the International Criminal Tribunal for the Former Yugoslavia, said that instead of focusing on what is not in the indictment, his team will focus on evidence to support the charges.

“The indictment contains accounts of dozens of victims and this is what we will be presenting in the course of the trial,” Tieger said.

Thaci is charged, alongside three other former senior Kosovo Liberation Army members – Kadri Veseli, Rexhep Selimi, Jakup Krasniqi – with war crimes and crimes against humanity committed from “at least March 1998 through September 1999” in Kosovo and Albania. Krasniqi also pleaded not guilty on Monday.

According to the ten-count indictment, the four KLA men were part of a joint criminal enterprise and “shared the common purpose to gain and exercise control over all of Kosovo by means including unlawfully intimidating, mistreating, committing violence against, and removing those deemed to be opponents”.

The indictment says that these opponents included people who were or were perceived to have been collaborating or associating with Yugoslav forces or did not support the aims or means of the KLA, including ethnic Albanians associated with other movements, Serbs, Roma and people of other ethnicities.

The joint criminal enterprise was involved in “crimes of persecution, imprisonment, illegal or arbitrary arrest and detention, other inhumane acts, cruel treatment, torture, murder, and enforced disappearance of persons”, the indictment claims.

Thaci is considered to be a key member of the joint criminal enterprise due to his role, first as a founding member of the KLA, then as head of its Political and Information Directorate, and after that, from March 1999, as prime minister of the Provisional Government of Kosovo and the KLA’s commander-in-chief.

Most of the crimes in the indictment were committed in detention centres in 17 municipalities in Kosovo and two districts in Albania, Kukes and Has.

The indictment says that the crimes “were intended to serve as a warning and to exert pressure on the targeted population as a whole, deterring opposition to, and enforcing absolute unity behind the KLA”.

The group issued directions, instructions, and orders regarding those considered to be opponents.

The indictment says that he allegedly formulated and/or participated in the development, approval, promotion, dissemination, and implementation of plans, policies, and practices in furtherance of the common purpose, including in the form of communiques, public statements, internal rules and regulations, structures, and information-gathering and reporting mechanisms.

He also participated “in facilitating, condoning, encouraging, and/or otherwise aiding in the crimes…failed to take adequate steps to prevent and investigate crimes, and/or punish or discipline the perpetrators” and played key role in “providing, arranging, and/or facilitating political, logistical, military, and/or financial support” to accused KLA members to commit crimes.

Thaci also “took steps to intimidate and assert dominance over units affiliated with the [opposing group] LDK [Democratic League of Kosovo], including the government-in-exile affiliated Armed Forces of Kosovo Republic (‘FARK’)”, it claims.