History textbooks for secondary school pupils in Bosnia and Herzegovina’s two ethnically-dominated entities and in Serbia give different accounts of what happened during the 1990s Bosnian war, further entrenching divisions through children’s education.

The genocide of thousands of Bosniak men and boys from Srebrenica in July 1995 was one of the worst atrocities in Europe since World War II, and it happened in Bosnia’s Serb-dominated Republika Srpska entity - but 14-15-year-old pupils living in the entity are taught almost nothing about it in school.

The history textbook for 14-15-year-olds in Republika Srpska’s schools, written by Dragisa D. Vasic and published by the Institute for Textbooks and Educational Resources of Eastern Novo Sarajevo, makes absolutely no mention of the Srebrenica genocide, except to say that “in July 1995 the Bosnian Serb Army conquered Srebrenica and [nearby village] Zepa”.

The history textbook does list Srebrenica among what it calls “mass crime locations”, however. But when it speaks about the term “ethnic cleansing”, it mentions the persecution of Serbs, but not Bosniaks and Croats.

By contrast, the history textbook for 14-15-year-old pupils in Bosnia’s Bosniak- and Croat-dominated Federation entity does explain that the Bosnian Serb Army was responsible for the Srebrenica massacres.

The textbook, written by Izet Sabotic and Mirza Cehajic and published by NAM Tuzla and Vrijeme Zenica, states that the Bosnian Serb Army “ethnically cleansed all areas under its control of the non-Serb population, destroying cultural, religious and other historical features which confirmed their [Bosniak and Croat] national identity”.

“The non-Serb population that did not flee in time or had no money to buy freedom most often ended up in concentration camps,” the textbook adds.

When it comes to the three-and-a-half-year siege of Sarajevo by Bosnian Serb forces, the textbook states that “the largest part of Sarajevo was controlled by the ARBiH [Army of the Republic of Bosnia and Herzegovina], while a smaller part of the capital and its surroundings were under the control of the VRS [Bosnian Serb Army]”.

It adds that after the end of the war “it was particularly painful for the Serb side to turn almost the entire city of Sarajevo and a large part of its surroundings over to the Bosniaks”.

Bosnian historian Husnija Kamberovic argued that textbooks should explain what happened on both sides.

“It is pointless to deny the siege of Sarajevo, but we should not neglect the suffering of all its residents, including Serbs in the besieged city,” Kamberovic said.

However, BIRN’s analysis of history textbooks used for 14-15-year-olds in Bosnia and Herzegovina’s two entities and in Serbia shows that they generally take a different approach to the 1990s Bosnian conflict, focusing on war victims from their own ethnic group while playing down or ignoring victims from other ethnic groups

All the major events and personalities of the Bosnian war – the siege of Sarajevo, ethnic cleansing, the Srebrenica genocide and the roles of Bosnian Serb political and military leaders Radovan Karadzic and Ratko Mladic – are presented differently in the different textbooks used in each place.

Republika Srpska’s history textbook for 14-15-year-old pupils describes Bosnian Serb political leader Radovan Karadzic, who was jailed for life by the International Criminal Tribunal for the Former Yugoslavia for genocide and other wartime crimes, as “a psychiatrist, poet and politician”.

It also says that “as founder and leader of the Serb Democratic Party, he had an extremely important role in the creation of Republika Srpska, whose first president he was”.

Elsewhere in the textbook, it is says that in Hollywood films, “Republika Srpska is presented as ‘an evil state’” and Karadzic as “a runaway, deviant, killer and criminal living in luxury, hidden from the incompetent United Nations”. 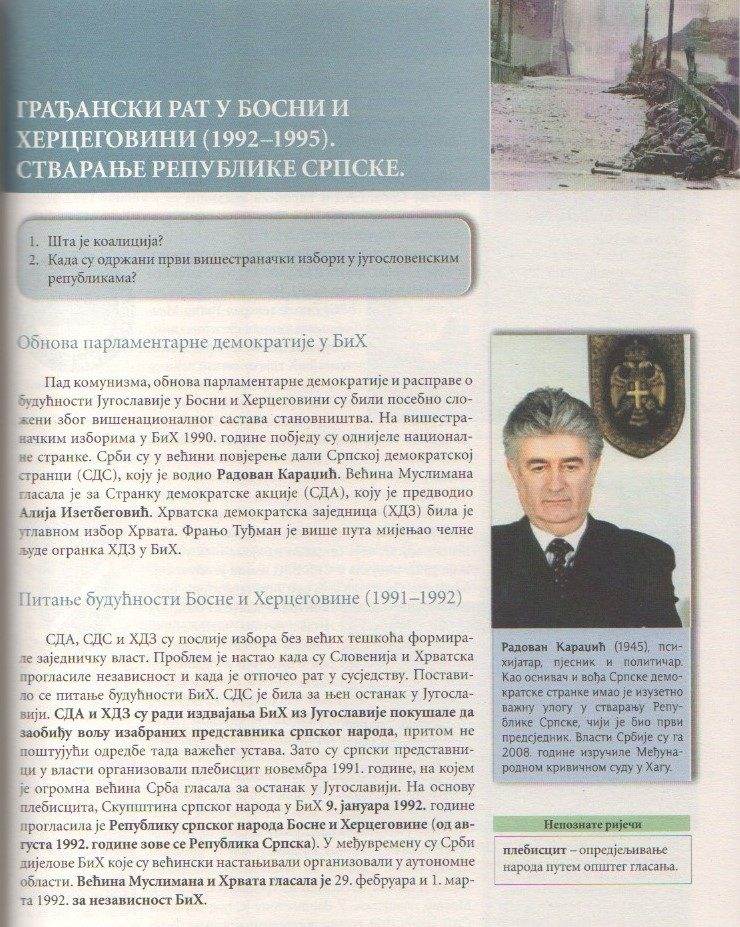 The issue of history textbooks returned to news headlines in the former Yugoslavia when Serbia’s outgoing Minister of Education, Science and Technological Development, Mladen Sarcevic, said before his recent replacement that Serbia and Republika Srpska were working together to harmonise their school curricula so that “subjects including history, geography, musical culture, language and literature will be taught identically in the areas where Serbs live”.

This could mean that the educational division between Serb and non-Serb children in Bosnia and Herzegovina becomes even more stark.

A Serbian textbook for 14-15-year-old pupils at primary schools, written by Momcilo Pavlovic and Djordje Djuric and published by the Institute for Textbooks in Belgrade, states that the Balkan wars were “catastrophic for all citizens, irrespective of their ethnic and religious affiliation”.

While the textbook says that the Srebrenica massacres were a war crime, but in line with the stance taken by the Serbian authorities, it does not classify them as genocide despite the rulings of international courts. It also questions the well-documented death toll.

“The massacre in Srebrenica is a war crime and crime against humanity committed by the Bosnian Serb Army with help from paramilitary formations against Bosniak soldiers and civilians. The information about the total number of victims is disputable. Some say that around 8,000 people were killed, while others say the number is exaggerated,” the textbook says.

However it does note that the International Court of Justice in The Hague, in its verdict in a case brought by Bosnia and Herzegovina against the Federal Republic of Yugoslavia, “classified this crime [Srebrenica] as genocide, but it did not link Serbia to this event”.

The book states that “at the beginning of February 1994 a shell exploded at the Markale open-air market in Sarajevo, killing a number of citizens. Despite contradictory evidence, Serbs were accused of that attack.”

Verdicts handed down by the International Criminal Tribunal for the Former Yugoslavia determined that a shell fired from Bosnian Serb Army positions hit the Markale market.

Kamberovic argued that school textbooks should follow the verdicts handed down by the courts in cases related to the 1990s wars.

“We should stick to the facts determined in court proceedings and it should not be a problem to include those facts in textbooks,” he said.

“Of course, the textbooks should also emphasise that individuals were responsible for the crimes, and the message should always go in the direction of building awareness about pointless suffering. You cannot turn criminals into heroes,” he added.

Kamberovic said that schoolchildren should be taught about the history of the 1990s wars because it was better for them “to learn about it from good-quality textbooks than from propaganda articles on various websites”.

“When we reach the stage where children face up to their parents’ actions, we will be ready to build a modern society,” he added.

Aleksandar Todosijevic, president of the Association for Social History – Euroclio from Belgrade, also warned that schoolchildren are “either exposed to simplified ‘official’ narratives and one-sided interpretations or not taught about this subject at all, but left to the influence of ‘tabloid history’”.

In either case, “they are not offered factual insights into wartime events or an opportunity to analyse, understand and assess various sources and interpretations of these events”, Todosijevic added.

“Schoolchildren should be presented with historically correct information in an objective, unbiased manner… We must enable them to have holistic and comprehensive knowledge about these topics so they will not judge certain events superficially, one-sidedly and emotionally,” he concluded.

Historian Melisa Foric-Plasto, senior assistant professor at the Faculty of Philosophy at Sarajevo University, also argued that recent history should be a part of the curriculum although it is “an extremely controversial and complex matter”.

“The aim of studying the 1990s wars should not be to create hate and new divisions, but to use examples from the recent past to develop empathy, come to terms with the past, and learn about the values of peace as opposed to what war is and what it brings,” Foric-Plasto said.

The OSCE Mission to Bosnia and Herzegovina, which has issued recommendations about the teaching of the country’s recent history, said that textbooks should be objective and “aimed at building mutual understanding, reconciliation and peace”.

“Ethnic divisions in Bosnia and Herzegovina, which emerged following the conflict, are still reflected in learning and teaching of history, which results in three separate, one-sided and often mutually conflicting historic narratives,” the OSCE Mission warned.

But making changes will not be easy in such an environment, it noted realistically: “In post-conflict societies, reform of history classes is a long, sensitive and complex process.”