In the first of BIRN Bosnia’s Forgotten Victims series, Bosniaks who survived the execution of prisoners on a bridge near Doboj in 1992 express outrage that no one has yet been convicted of the shootings.

Safet Salkic had just turned 27 when he was taken from a military hangar where he was being held captive near Doboj in northern Bosnia one night in June 1992. He had been beaten up, and he and three other men asked to see a doctor.

“We were not taken to the doctor. They took us to be shot,” Salkic said.

He recalled that he was the last one to be taken out of a minivan which had a transported a group of men, accompanied by armed soldiers, from the hangar to the nearby Zeljezni Most (Iron Bridge), which spans the River Bosna.

A man they called Bosko took them out of the vehicle one by one. It was not possible to confirm Bosko’s identity for this article or obtain data about what has happened to him since.

“Each time after a person had been taken out, I heard a volley of fire or a single shot,” Salkic said.

He recalled that it was raining heavily when he approached the bridge, where he saw police officers in blue uniforms and soldiers in olive-grey Yugoslav People’s Army uniforms, as well as members of a unit called the Red Berets.

“There was a big hole between the iron railings [of the bridge], so you would fall right away after being shot. The Bosna was a big river. They brought me to the bridge. I was ordered to go to the other side. They said I would stay alive if I crossed over to the ‘Balijas’ [derogatory term for Bosniak troops from the Bosnian Army who held positions on the other side of the bridge],” Salkic explained.

“I do not know how many metres I went before they began shooting. I crawled to the end of the bridge. When I stood up, a bullet hit me above my right ear. I jumped to the right. When I saw them walk across the bridge with a flashlight, I hid in the grass,” he continued.

He was there with other residents of the village of Jablanica, near the town of Maglaj in northern Bosnia, who were first taken to military detention camps in the Doboj area and then shot on the bridge.

No final verdicts have yet been handed down in Bosnia and Herzegovina for the murders on Zeljezni Most in June 1992 of 13 captives – the number of victims that witnesses say were killed.

Salkic said that he was in “the first of three groups” of people who were taken from hangars formerly used by the Yugoslav People’s Army in Usora near Doboj to Zeljezni Most in the Doboj suburbs in order to be shot.

“The bodies of my three neighbours from the first group have still not been found,” Salkic said.

On the night of the shooting, soldiers beat up the prisoners from Jablanica in the military hangar, where Bosko was the boss, Salkic said.

“Bosko entered the hangars and ordered us to line up. He took three men out. We heard screams, blows, curses. The people were covered with blood on their return. Bosko ordered three more guys to go out, but then he took us all out. He brought some Red Berets members,” he recalled.

“I was kicked in my head with a military boot. We were brutally beaten and had visible injuries,” he added.

After surviving the shooting, Salkic found shelter in a house in Pridjel, then crossed the River Bosna and reached safety in territory that was under Bosniak control.

Salkic, who still lives in the village of Jablanica, said he finds it hard to pass by Zeljezni Most today.

“God forbid that anyone has to survive what I did,” he said.

Escape through the river 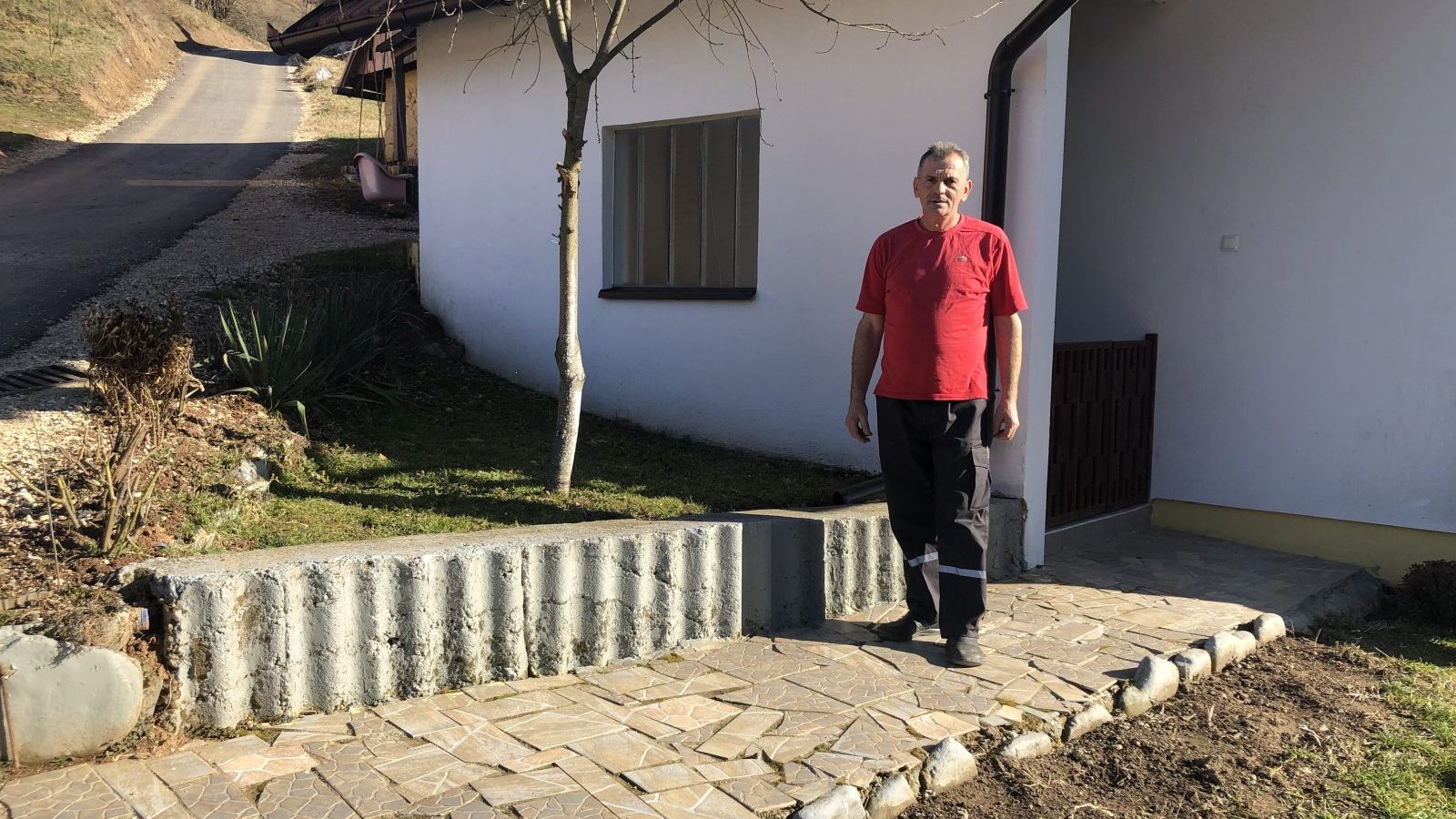 Safet Salkic, who survived the shootings on the bridge in 1992. Photo: BIRN.

Jasmin Hasanic, who also survived the shooting, said that these days, he goes to Doboj “only if I have to”.

“I feel bad [there]. All those images come back to me. The body of Asim Basic from my group was found in [a mass grave in] Sremska Mitrovica [in Serbia]. Ibrisim Begic, who was also with me, was found in the Doboj area. The body of Almir Bajric, who was in the second group, was also discovered. I married his sister later on,” Hasanic said.

Serb forces had occupied Doboj at the beginning of May 1992. Some time later they also occupied the villages of Pridjel and Sevarlije, where Bosniaks were the majority.

Hasanic said he was left in the military hangar together with other Jablanica residents after the first group had been taken away to be shot. The two other groups were taken during the following two evenings.

“As we were leaving the hangar, we had to leave our documents at the reception. They probably wanted to hide the evidence. I only had my house key. I was told to keep it,” he recalled.

“When I got out [of the minivan that took them from the hangar], I realised they were taking me towards the Bosna. I was escorted by a young man who came with the manager. He was maybe younger than me or the same age,” he continued.

“I managed to pull away. They were shooting at me. I jumped into the Bosna. Volleys of fire continued. I came ashore on the same side a little bit further down. Later on I heard two short volleys and I realised they killed the two men who I had left behind.” 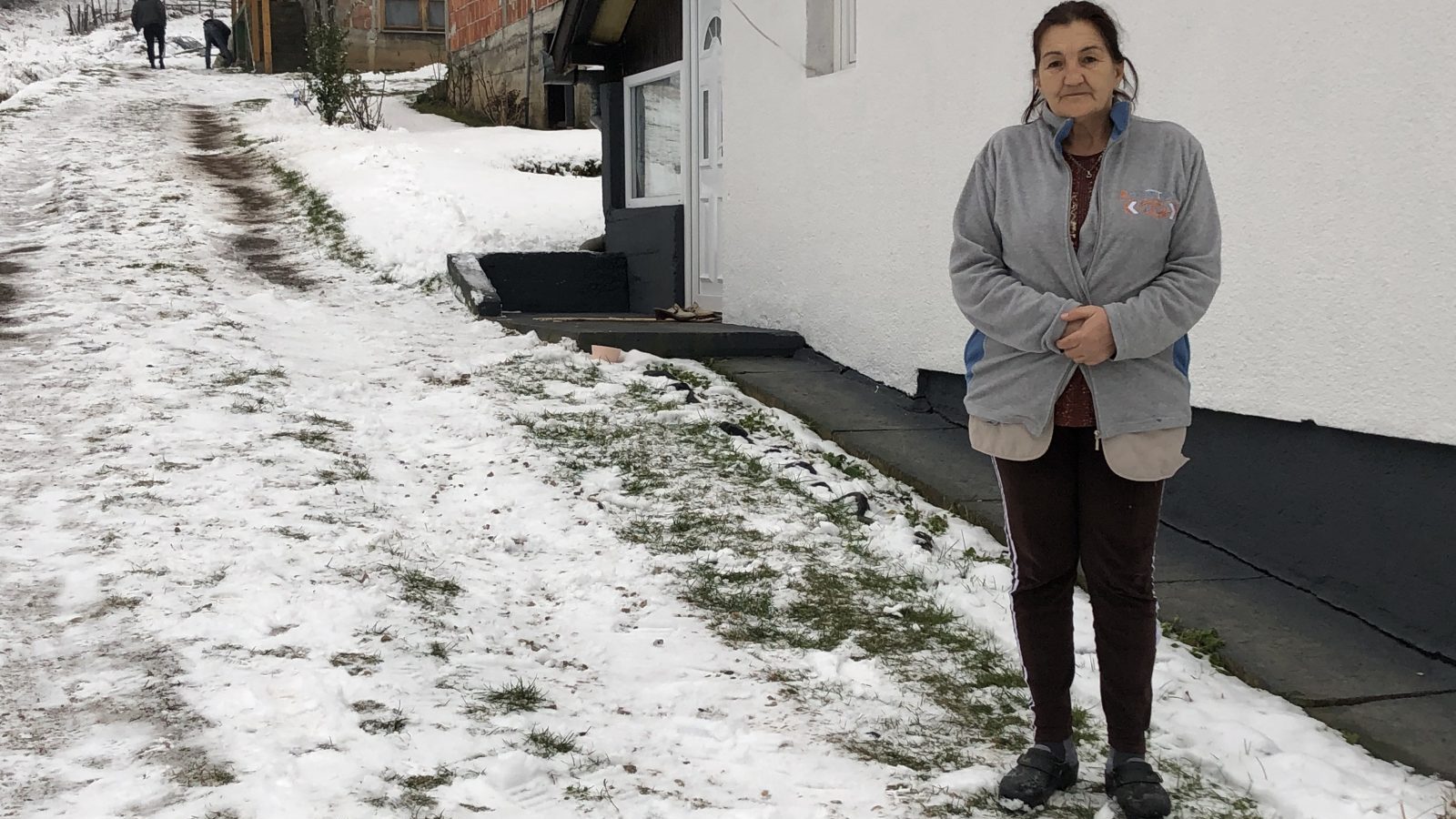 Jablanica is a village located between Doboj and Maglaj, around 30 kilometres away from the bridge where the prisoners were shot.

Relatives of the victims only learned about their murders from survivors Safet Salkic and Jasmin Hasanic after they returned to Maglaj.

Fadila Begic, the sister of victim Ibrisim Begic, was one of them.

She recalled how she helped to identify her brother in 2007 after his remains were exhumed in Podnovlje, which is also around 30 kilometres from Doboj.

“Bones, which I was told belonged to our brother, were put on one table,” she said.

“He had his jeans on. Only the upper part of the trousers was there. Threads were hanging from the lower part. He was in a brown sweater. The back, sleeves and front part of the sweater were undamaged,” she added.

She said she is bitter because nobody has been tried for the murder of her brother and the other civilians from Jablanica.

“Why was he killed? Killed for nothing. Only because his name was Ibrisim. He was not a war criminal. He did not kill anyone. He had no gun. The war here had not even started properly when they captured him,” Begic said.

She said that the parents of three brothers who were killed on the bridge have since died. “They did not live to see who had killed their children,” she said.

‘The victims did no harm to anyone’ 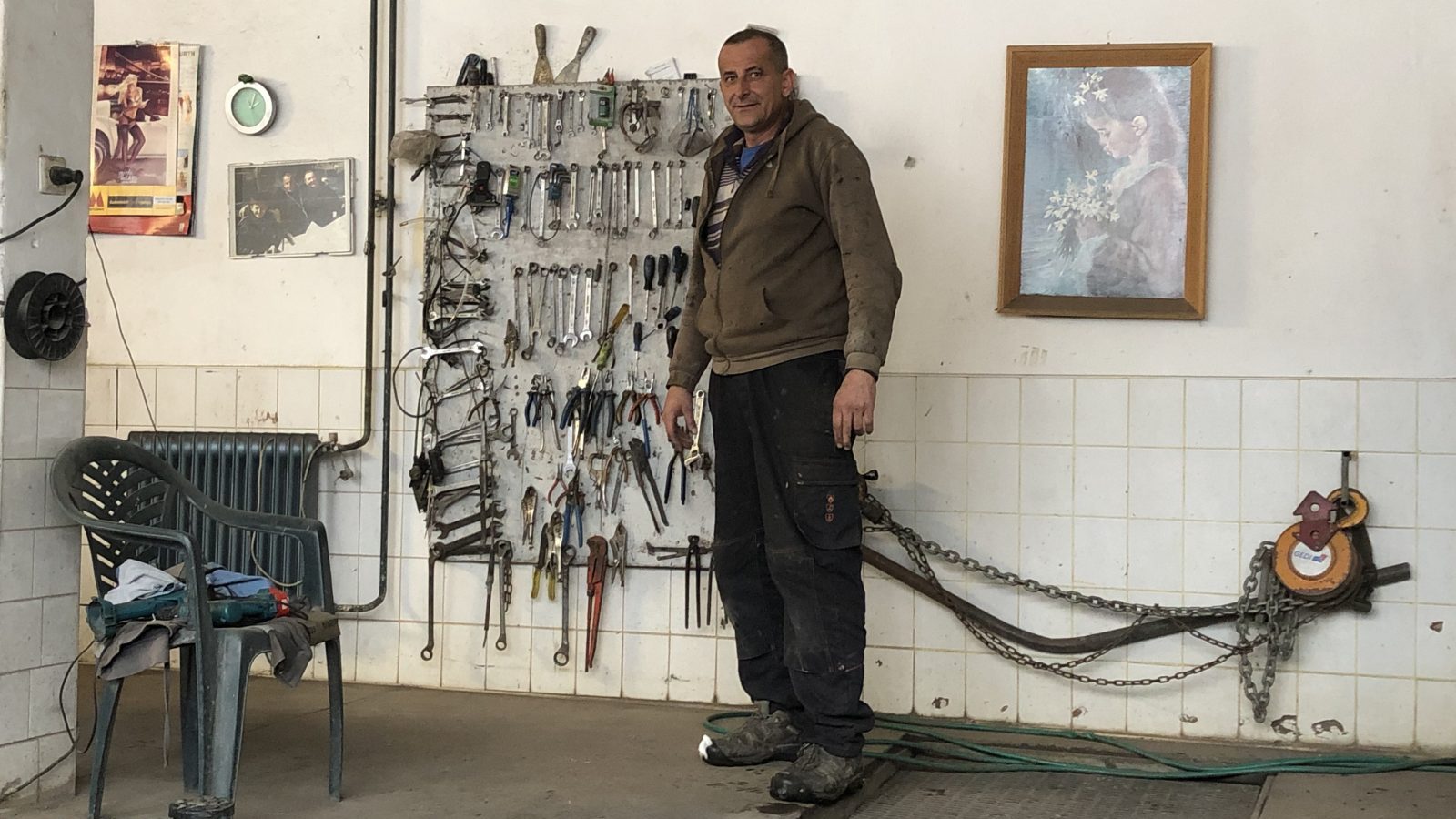 Ekrem Bradaric, whose father was shot on the bridge in 1992. Photo: BIRN.

A case addressing the murders on Zeljezni Most was opened at the District Prosecution in Doboj and some witnesses were interviewed, but then the state prosecution took it over.

When asked about the case, the state prosecution said that “the murder of civilians from Jablanica, near Maglaj, is covered by the case against Borislav Paravac and others, which refers to events that happened in the Doboj region”.

Borislav Paravac has been charged, together with Andrija Bjelosevic and Milan Savic, with “participating in a joint criminal enterprise against the Bosniak and Croat civilian population in the Doboj area from early May 1992 to the end of 1993”.

At the time when the villagers from Jablanica were shot, Paravac was president of the Serb-led Crisis Committee in the Doboj municipality. Paravac, who later became a member of the tripartite Bosnian state presidency between 2003 and 2006, said he did not want to speak about the incident for this article because proceedings against him are underway, so it was not in his interest to do so.

Paravac was a member of the tripartite Bosnian state presidency between 2003 and 2006.

His co-indictee Bjelosevic, the former chief of the Security Services Centre, a police headquarters in Doboj, says he did not hear about the murders on the bridge in Doboj in June 1992 when they happened because the police building “was not even functional in May and June”. He said he only heard about the crime later from prosecution witnesses.

The indictment in the case alleges that guards at the military hangars near Doboj allowed members of the Red Berets to take 12 civilians away in the period between June 15 and 17, 1992.

The civilians went missing without trace afterwards and the remains of one of them, Almir Bajric, were exhumed in Podnovlje after the war, it says. The indictment does not mention the names of the alleged direct perpetrators.

Slobodan Karagic, commander of a Bosnian unit called the Red Berets, was sentenced in July 2018 to 12 years in prison for war crimes against the civilian population in the Doboj area during 1992.

However, two groups called the Red Berets were operational in the Doboj area in May and June 1992.

One was a unit of the Serbian State Security Service that arrived in April 1992 and according to witness testimonies before the Hague Tribunal and the Bosnian state court, took over the most important buildings in the town, including the Security Services Centre.

The other unit was a local police formation called Mice – Red Berets, whose members were accredited to the Security Services Centre in Doboj.

Meanwhile at the time of the Zeljezni Most murders, the Yugoslav People’s Army in the Doboj area was commanded by major Milovan Stankovic, who now lives in Serbia and said that he is not aware of the killings.

“Believe me, I have never heard of that. I said, if there is anything against me, it should go through the regular court here in Serbia. I am not running from responsibility,” Stankovic said.

The Borislav Paravac indictment alleges that more than 3,000 civilians were detained in military hangars in Doboj and surrounding municipalities at various stages. They were held in inhumane and unhygienic conditions while being deprived of food, water and medication, and physically and mentally abused.

One of the detainees was Salih Bradaric, who according to Safet Salkic was taken away and shot at Zeljezni Most, and whose remains have still not been found. His son Ekrem now lives in Jablanica, where he owns a car respraying workshop.

“My late father was doing the same job at the same business premises. When we returned to Jablanica after the war, I found absolutely no tools in this workshop. Everything had been pillaged,” Bradaric said.

He expressed discontent about the lack of prosecutions for the Zeljezni Most shootings: “It is not good that nobody has answered for the murder of my father and other neighbours,” he said.

Mujo Begic, the brother of Ibrisim Begic, another of the Zeljezni Most victims, also condemned the lack of justice for the victims of the execution.

“The men [who were shot] did no harm to anyone,” he said. “They were not caught with rifles in their hands as soldiers. They were taken away from Jablanica as civilians.”