The OSCE Mission to Bosnia and Herzegovina’s outgoing chief, Bruce Berton, told BIRN in an interview that at the end of his two-year term in the country, he was concerned that “insufficient justice” had been achieved for victims of war crimes in Bosnia and Herzegovina nearly a quarter of a century after the conflict.

“The victims and their families need to see justice in these cases,” Berton urged.

“The pace of prosecutions is too slow, the conviction rate is too low and what the prosecutor’s office had promised to do in terms of transferring some of those cases to the entity-level and Brcko District courts, has not been done in accordance with the agreement that they made,” he said.

The OSCE Mission has issued several recommendations to improve the efficiency of the Bosnian state prosecution’s work on war crimes cases, most of which deal with issues like the management of prosecutors, the way cases are divided up between prosecutors and how to improve the poor drafting of indictments.

“We recommended to the Bosnian state prosecution to reconstitute regional teams that they had in order to maintain expertise in a particular area of Bosnia and Herzegovina. I think a part of [the problem] is the management, a part of it is the quality of indictments, so I think that there is an issue there,” Berton explained.

He called on Bosnia and Herzegovina to finally adopt its revised state strategy for the processing of war crimes in order to speed up the process of allocating the remaining cases between the state and entity level.

According to the revised strategy, which Bosnia’s judicial overseer, the High Judicial and Prosecutorial Council, approved a year ago, all war crimes cases should be completed by 2023, with the most complex ones being dealt with at the state level and all others referred to entity-level courts.

Thousands of cases remain unprocessed and a previous deadline for completing them was missed in 2015.

Denis Zvizdic, chairman of the Council of Ministers, the executive branch of Bosnia and Herzegovina’s state-level government, said in July that the problem preventing the revised strategy from being adopted was so-called ‘Category A’ cases which were transferred, before the investigations were finished, to Bosnian prosecutors by Hague Tribunal prosecutors.

Bosniak politicians have been delaying the adoption of the strategy, claiming that there needs to be a specific order in it to make sure Category A cases are a priority because the Bosnian prosecution is not focusing on these cases.

However, Berton argued that “our analysis shows that the prosecutor’s office has actually prosecuted a lot of those [Category A] cases”.

“For us, there is no reason why the revised strategy shouldn’t therefore be adopted and we urge the Council of Ministers to do that,” he said.

Fewer corruption indictments being raised
Berton also criticised the work of the judiciary in processing corruption cases, particularly the Bosnian prosecutor’s office and the Special Prosecution in the country’s Serb-dominated entity, Republika Srpska.

“Clearly the confidence in the judiciary is at a fairly low level and the way to improve that is to have some convictions at the high level and have people who are the part of the judiciary be accountable for their actions,” he added.

When asked to evaluate the work of the chief state prosecutor, Gordana Tadic, in view of the poor results in processing corruption and war crimes cases, Berton said “the problems go back much further” than Tadic’s time in office.

“So the problem has not been here in the last couple of years only, and I think that this points to some much more deeper systemic issues within the prosecutor’s office,” he suggested. 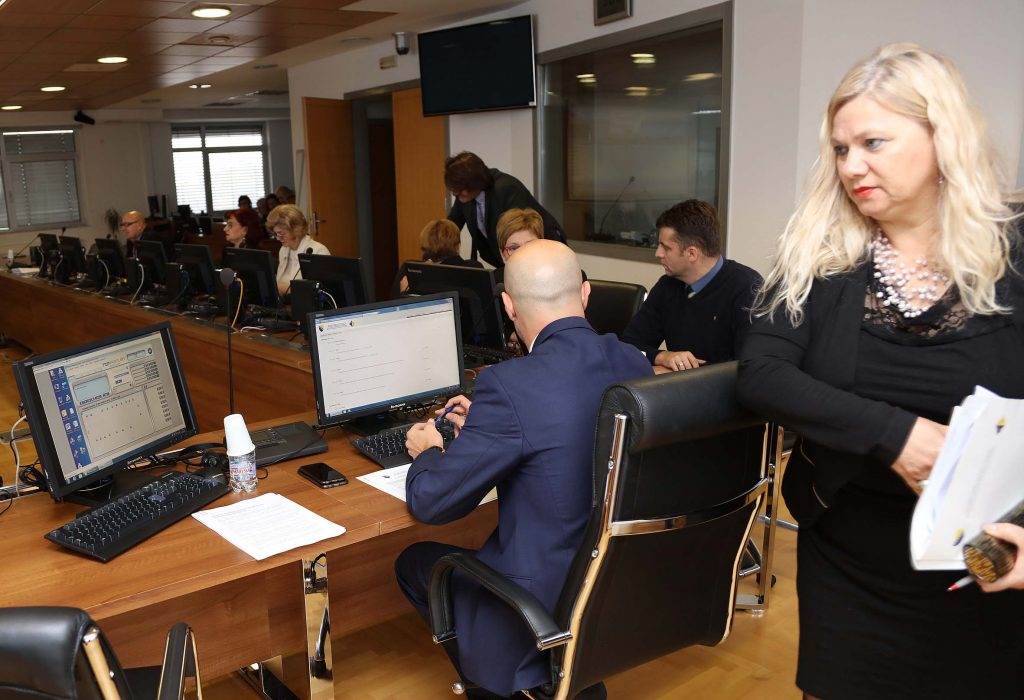 VSTV. Izvor: BIRN BiHMeanwhile he argued that Bosnia’s judicial overseer, the High Judicial and Prosecutorial Council, HJPC, has “unquestionably been a politicised body”.

“At this point it is not possible to talk about HJPC free of political influence. Recently, as you know, us, the EU and the US embassy sent a letter to HJPC and it was meant to specifically address those issues of transparency and accountability in talking about hiring practices, because they have not always seemed to have been merit-based, the performance evaluations of judges and prosecutors, but also transparency in terms of [judges’ and prosecutors’] asset declarations – so saying what it is that you have,” Berton said.

Earlier this year, media published a compromising video of Milan Tegeltija, the president of the HJPC, which appeared to show him talking about expediting a court case.

Disciplinary charges were filed, but the disciplinary committee said it did not have the authority to sanction the president of the HJPC.

Berton said that any such situation “diminishes the reputation and causes the loss of confidence” in the HJPC.

“What we said with regard to Mr. Tegeltija and the disciplinary council was that the legal framework absolutely provides for accountability for any member of HJPC, including the president, and so for us the most troubling issue about this was the disciplinary committee saying that they were incompetent to judge on this and in that sense that does put Mr. Tegeltija above the law and that’s simply not right,” he explained.

The general lack of public confidence in the Bosnian judiciary is connected to its lack of transparency and tensions with the media as well as its poor results, Berton argued.

“There has been, as you said, a tough relationship with some parts of the media. My solution to that, if I were in their shoes, would be – if you want to improve that relationship, then don’t simply try and defend yourself when you get critiqued, take those criticisms on board and do so in a transparent way, talk to the media and the people who are out there and in that way you’ll probably be able to restore some of that lost confidence,” Berton said.