A Soviet-era plane that crashed in Greece, killing eight crew members, was carrying Serbian arms to Bangladesh in a deal brokered by a Bosnia-based company owned by a Polish weapons firm, BIRN has learned.

Polish arms trading company Metalexport-S was behind a shipment of 11.5 tons of Serbian ammunition to Bangladesh carried by a Soviet-era Antonov An-12 transport plane which crashed earlier this month near the Greek city of Kavala, BIRN can reveal.

The broker of the deal with the end user of the ammunition, the Bangladeshi Defence Ministry, was a Bosnian company, BA-METALEXPORT from Sarajevo, which is owned by Polish firm Metalexport-S.

“That’s right. We are 100 per cent owned by the Polish firm. They are conducting the business and we are in charge of this area,” Alen Djuzel, the director of the Bosnian company, told BIRN.

Djuzel also denied speculation that the arms were supposed to go to Ukraine, which arose because the operator of the Antonov An-12 plane was Meridian, a Ukrainian cargo airline.

“A deal with Bangladesh was signed in 2021, before the war in Ukraine even begin,” Djuzel said.

The chain of companies involved in the deal is even longer. Serbian state-owned arms factory Krusik produced the ammunition, while Serbian private company Valir, which was responsible for the cargo, got the Serbian export licence to Bangladesh in the name of the Bosnian company.

Asked why BA-METALEXPORT used Valir and did not deal with Krusik directly, Djuzel said that this was not possible and a broker had to be used.

“The Defence Ministry of Bangladesh is our buyer. We could not buy directly from the factory, since they have their brokers. Valir was a broker, they offered us what we need,” he said.

Initial speculation that Serbia was exporting the arms to Ukraine was denied right after the crash by Defence Minister Nebojsa Stefanovic, who said that the only link with Ukraine was the fact that a Ukrainian company, Meridian, was the owner of the plane that was transporting the Serbian-made cargo.

“The customer was the Ministry of Defence of Bangladesh, as a fully authorised end user. This flight had all the proper permits and everything was in accordance with international regulations,” Stefanovic told media on July 17.

Serbia’s Trade Ministry published an export licence, even though it was labelled as confidential, to show that there was no wrongdoing.

BIRN obtained the end user certificate signed on September 23, 2021, which shows that the Bangladeshi Armed Forces were the purchaser of the goods. The document was signed on behalf of Bangladesh by Waker Uz Zaman, lieutenant-general of Armed Forces Division. The initial contract was signed on June 29, 2021. 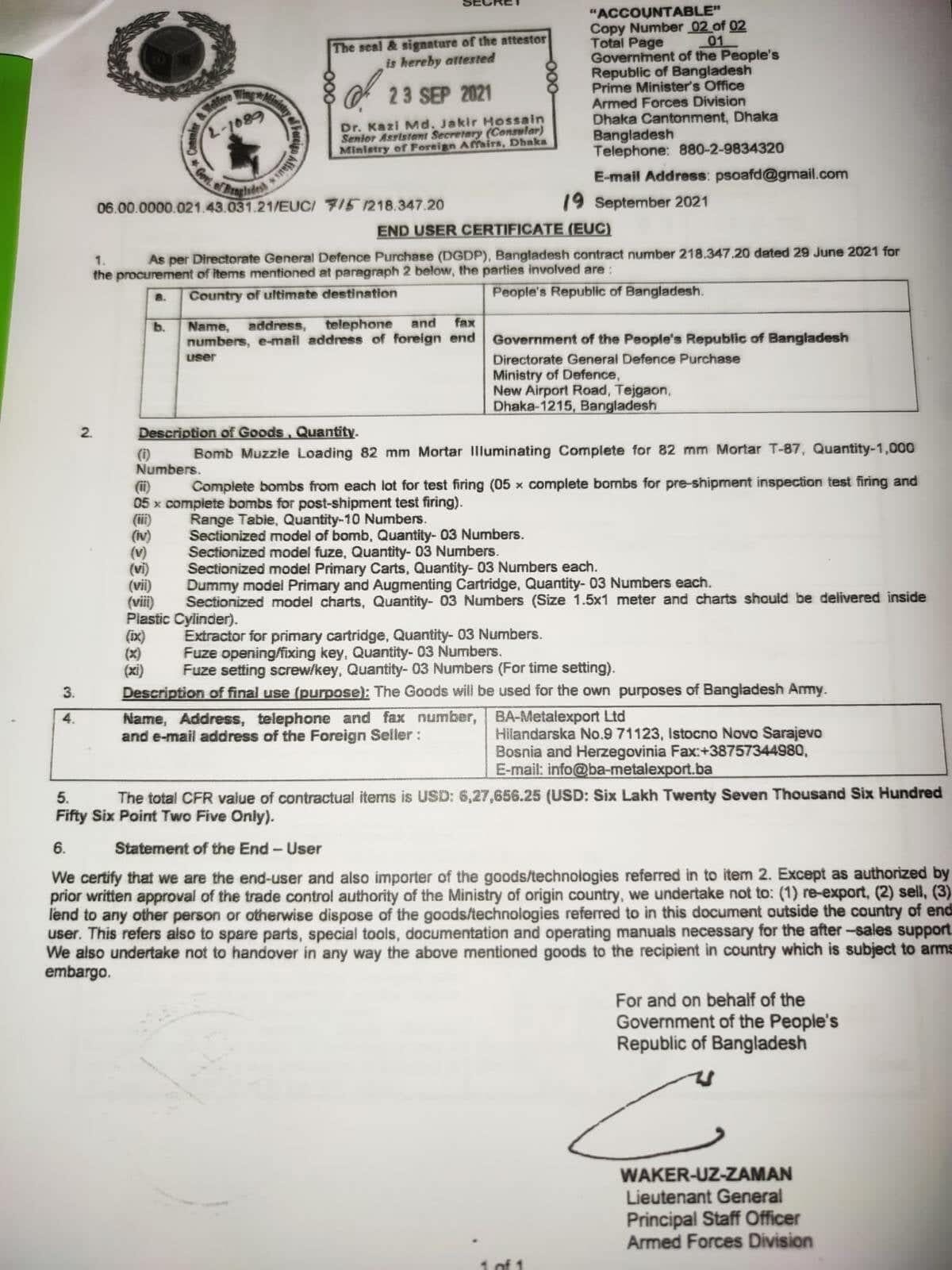 BIRN obtained the end user certificate signed on September 23, 2021, which shows that the Bangladeshi Armed Forces were the purchaser of the goods.

Serbian company Valir paid the state-owned Krusik factory a total of $602,790 for the ammunition, BIRN has learned.

Asked by BIRN how it was worthwhile transporting this relatively small amount of arms by plane, the director of Bosnian company BA-METALEXPORT said it was necessary to meet the deadline agreed with Bangladesh.

“The problems with transport in the world are huge. One container sent by ship is 150,000 euros, so we could not do that. The Bangladeshi side agreed to send two shipments by plane,” Djuzel said.

The Antonov that crashed was a 50-year-old aircraft. Production of the Soviet-era planes ceased in 1973 but they are still used by cargo operators in various countries.

According to the Greek Civil Aviation Authority, after entering Greek airspace, the Antonov’s pilot informed air traffic controllers that there was a fire in one of the plane’s engines.

The pilot requested an emergency landing in Kavala, which was granted, but shortly afterwards air traffic radars lost the aircraft.