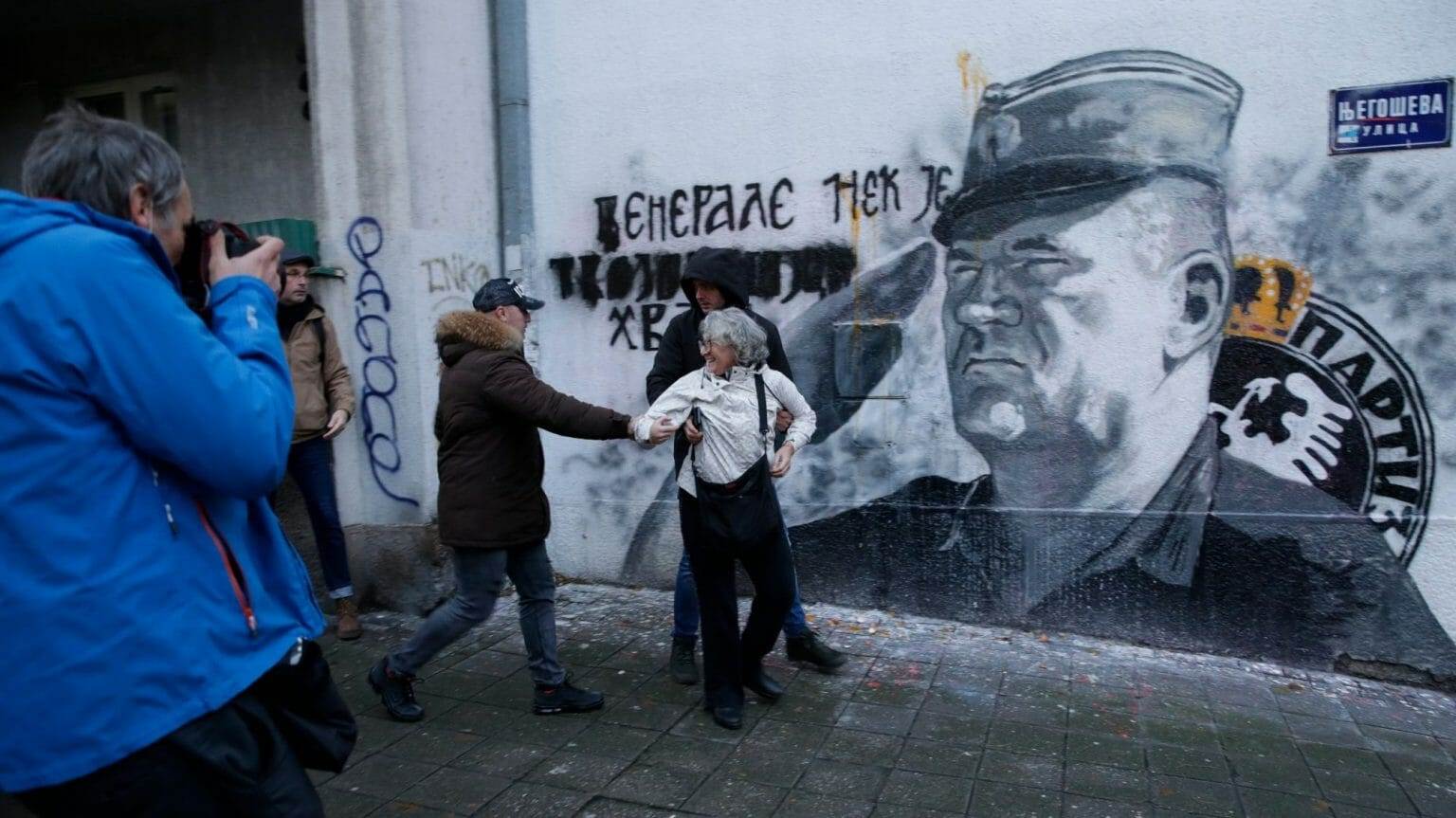 The trial of activist Aida Corovic, accused of disturbing public order and breaching the peace for defacing a huge painting of Bosnian Serb wartime general Ratko Mladic on the wall of a residential building in Belgrade in November, started on Tuesday at the Misdemeanour Court in Belgrade.

Corovic’s lawyer Aleksandar Olenik said that this was a trial of “a victim and not a criminal”, because “she was attacked by people in civilian clothes who inflicted bodily injuries on her” after she threw eggs at the mural of Mladic, who has been convicted of genocide and other wartime crimes.

“Her place is not on the defendant’s bench – she is the injured party, the victim – but in Serbia it is common that activists and human rights defenders are not only not protected, but also prosecuted, and this is also happening in this case,” Olenik told BIRN.

He also claimed that although there are multiple videos and materials showing what happened on the day of the incident, the judge decided to continue with the trial “so the harassment of Aida Corovic by the state, administrative bodies and the Misdemeanour Court continues”.

Corovic throw eggs at the mural of Mladic in November last year after Serbian police banned activists from the Youth Initiative for Human Rights, a Belgrade-based NGO, from holding a public gathering to paint over the mural. Corovic and another activist, Jelena Jacimovic, were arrested on the spot.

Police had been guarding the mural throughout the day, and according to local media, checking anyone who approached it.

The Serbian Interior Ministry insisted however that it was not protecting the Mladic mural but “securing public peace and order”.

After the incident, the Interior Ministry said that it arrested six people in total – the activists and some football fans, and that it would file misdemeanour complaints against all of them.

Corovic was charged with disturbing public order and breaching the peace “by indecent, arrogant or reckless behaviour” and insulting an official in the performance of their official duties. Possible fines range from around 85 and 1,275 euros or community service for the first offence, and from 425 to 1,275 euros or 30 to 60 days in prison for the second.

“On the one hand this is a farce but, on the other hand, a severe punishment formally hangs over Aida’s head,” Olenik said.

In June 2021, the Mechanism for International Criminal Tribunals in The Hague upheld Mladic’s life sentence for the genocide of Bosniaks from Srebrenica, the persecution of Bosniaks and Croats Bosnia and Herzegovina during the war, terrorising the population of Sarajevo with a campaign of shelling and sniping during the siege of the city, and taking UN peacekeepers hostage.

The mural was painted the month after Mladic was convicted. Residents of the building on which it appeared tried but failed to get municipal utility companies to erase it.

Since then, activists have thrown paint over it several times, but it has been repeatedly repainted by Mladic’s admirers.