Serbian Radical Party leader Vojislav Seselj is running for a seat in parliament again at general elections next month, despite having a war crime conviction that should have legally barred him from sitting as an MP. 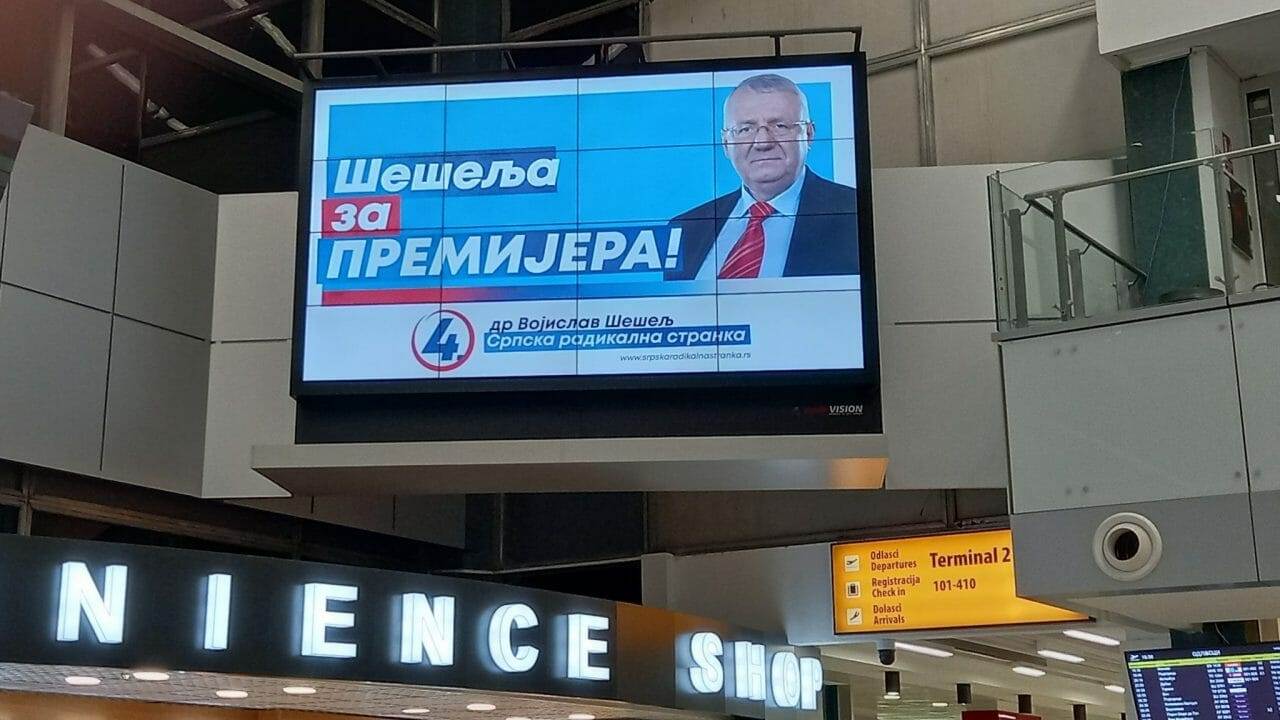 A campaign advert for Seselj on an electronic billboard at Belgrade airport. Photo: BIRN.

Ultranationalist politician Vojislav Seselj, leader of the Serbian Radical Party, is attempting to win back a seat in the Serbian parliament at elections on April 3 – even though, after being convicted by the UN war crimes court, he should have been barred from being an MP.

Seselj was sentenced to ten years in prison by the Mechanism for International Criminal Tribunals in The Hague in April 2018 for inciting war crimes against ethnic Croats in the Serbian village of Hrtkovci in 1992. However, because of the years he had already spent in custody, he did not have to serve the sentence.

Seselj was an MP when he was convicted, and under Serbian law, if a lawmaker receives a prison sentence longer than six months, his or her mandate must end. But the law was never applied to Seselj.

“We have seen that Vojislav Seselj, after being convicted by the Hague Tribunal, continued to perform the function of MP completely normally,” Zanic said.

Although Seselj was an MP at the time of his conviction, he lost his seat in parliament at the last elections in 2020 because his party failed to win enough votes to cross the three per cent threshold needed to enter the legislature.

He now hopes to re-enter the legislature, and Zanic said that he and his Serbian Radical Party have become increasingly politically active recently, backing Vladimir Putin’s war against Ukraine.

“Lately, after the Russian invasion of Ukraine, he has been promoted in the media as someone who supports Russia and its actions, so all this plays into the hands of right-wingers who have become very strong in Serbia in recent years,” Zanic told BIRN.

Seselj’s legal battles are not yet over. Currently there is an ongoing civil case against both him and Serbia, launched by one of the Croats who had to flee Hrtkovci during the war in 1992, who is suing for compensation at the Civil Department of the Higher Court in Belgrade.

Seselj is first on the electoral list of his Serbian Radical Party for the parliamentary elections, but in the simultaneous presidential polls on April 3, he has urged his supporters to vote for incumbent President Aleksandar Vucic, a former Radical Party official, so Vucic wins in the first round without a run-off against an opposition challenger.

“We must not allow a second round of presidential elections to take place, because in the second round these traitors [opposition parties] would create chaos in Serbia and bloodshed,” Seselj said.

Vucic and another former close associate of Seselj, Tomislav Nikolic, left the Radical Party in 2008 and formed the Serbian Progressive Party, which has been in power since 2012.