Former Bosnian Serb Army soldier Boro Milojica’s 20-year sentence for his involvement in the murders of Bosniak civilians in the Prijedor area in July 1992 has been upheld. 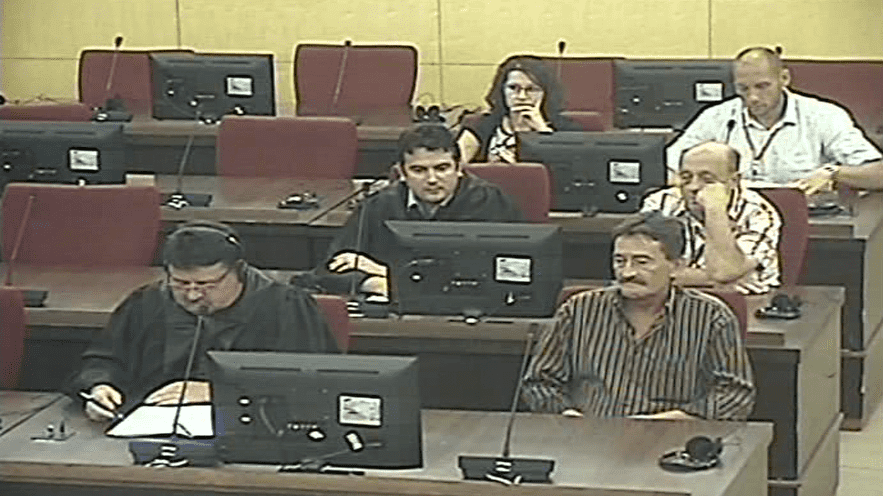 Boro Milojica and his co-defendant with their lawyers at their original trial. Photo: Bosnian state court.

Boro Milojica’s defence lawyer Ranko Dakic told BIRN that an appeal to reduce the former Bosnian Serb Army soldier’s 20-year sentence has been rejected by the appeals chamber of the Bosnian state court.

Milojica, a former member of the Sixth Company of the Bosnian Serb Army’s Ljubija Battalion, was convicted in October 2020 of committing multiple murders of civilians in the village of Hambarine in the Prijedor area in July 1992.

He was sentenced to 16 years in prison but his co-defendant Zelislav Rivic was acquitted.

Under a previous verdict handed down by the District Court in Banja Luka in December 2006, Milojica was also sentenced to seven years in prison for killing civilians in Ljubija in mid-August 1992 as a member of the Interventions Squad of the Sixth Company of the Bosnian Serb Army’s Ljubija Battalion.

Milojica then filed a request for these two sentences to be combined, which the Bosnian state court of Bosnia and Herzegovina agreed to do in June 2021, imposing a cumulative sentence of 20 years.

The defence appealed against the decision, requesting a shorter sentence, claiming that the court hadn’t taken into account any mitigating circumstances.

But the appeals court rejected this and confirmed the 20-year cumulative sentence.

Milojica and Rivic: Verdict for Prijedor Crimes in Late October