On the anniversary of the Bosnian Serb Army’s shelling of the city of Tuzla, which left 71 dead in May 1995, parents of children who were killed praised the Kapija Memorial Centre for safeguarding the truth about the attack. 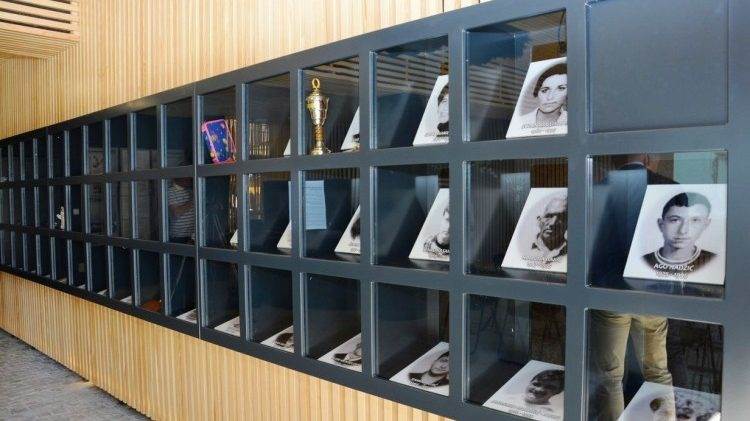 Twenty-six years ago, a shell fired from positions held by the Bosnian Serb Army hit the Kapija area of Tuzla in central Bosnia and Herzegovina, killing 71 people and injuring over 200 more.

Most of the casualties on May 25, 1995 were young people; the youngest was a two-and-a-half-year-old boy called Sandro Kalesic.

Since the deadly attack, some Bosnian Serbs have tried to promote false claims that their forces did not fire the shell, alleging that the blast was caused by explosives laid by unnamed ‘terrorists’ to discredit the Serbs.

The Kapija Memorial Centre, which opened a year ago on the 25th anniversary of the attack, not only preserves the memory of those who were killed but counters such false claims about the attack, said Irena Mujacic, the mother of Sandro Kalesic.

“This memorial centre is an eternal witness to what happened at Kapija on May 25, 1995,” Mujacic told BIRN.

“When they visit this place, anyone who is interested can see the truth about events on that tragic day in the best possible way,” she added.

Sandro’s father, Dino Kalesic, said he would like young people from schools around the country to visit the memorial centre and learn about what happened, in order to prevent such crimes being committed again.

“The Kapija Memorial Centre is an excellent thing that preserves everything that happened in Tuzla on that fatal night, May 25, 1995, from disappearing. As the date has not made it into school textbooks, this is a fantastic opportunity to remind new generations about the evil committed by the Bosnian Serb Army,” Kalesic told BIRN.

So far, Bosnian Serb Army general Novak Djukic is the only person who has been convicted of involvement in the attack. However, Djukic remains free after fleeing to Serbia.

He was initially convicted in 2014 of ordering the shelling and sentenced to 25 years in prison, but was soon released from prison after Bosnia’s Constitutional Court quashed the verdict because of a legal error.

The Bosnian state court then convicted him again and sentenced him to 20 years, but a few days later his defence lawyer informed the court that his client had gone for medical treatment in Serbia.

An arrest warrant was issued because he failed to respond to a call to go and serve his sentence, and then the Bosnian authorities asked Serbia to take over the enforcement of the judgment convicting him.

Serbia agreed but the court process has been stalled since then because of Djukic’s health problems. Last year, a medical report by Serbian doctors said that he is incapable of appearing before the court in Belgrade until September 2021 at the earliest because of his psychological problems.

His defence team has also sought to spread its theory that unknown terrorists staged the blast, citing its own private reconstruction of the incident conducted at a Serbian Army military base, although this was criticised by the Humanitarian Law Centre NGO as “unverifiable”.

Serbia’s behaviour in the Djukic case has been criticised by the International Criminal Tribunal for the Former Yugoslavia and its chief prosecutor, Serge Brammertz.

The Serbian Defence Ministry even hosted a promotional event in 2019 for a book that claimed to prove that Bosnian Serb forces were not responsible for the massacre, entitled ‘Tuzla Kapija – A Stage-Managed Tragedy’. It was written by Ilija Brankovic, a former Yugoslav People’s Army general involved in Djukic’s defence.

Dino Kalesic said that Serbia was insulting the victims and their families by delaying the jailing of Djukic, and described the entire process as a “farce”.

“For me, he has been convicted. It is completely irrelevant whether it is 20 or 25 years. Knowing that he has not served a single day in prison for killing 71 children is like torture,” Kalesic said.

“The truth is known. It has been proved. It would be good if he serves the sentence that he deserves. The fact that he fled to Serbia should be blamed on our prosecution and the Court of Bosnia and Herzegovina as well as on Serbia, which is offending all the victims and their families by doing this,” he added.

‘Come and see the truth’

Arif Ahmetasevic, the father of another victim of the Tuzla attack, Edina Ahmetasevic, who was 20 when she was killed in May 1995, said he does not think that Serbian doctors will ever pass Djukic fit to go to court.

“I do not believe the new trial will be held,” he said.

Ahmetasevic praised the Kapija Memorial Centre for preserving the memory of one of the gravest crimes in Bosnia during the 1992-95 war.

“All those interested in finding out the truth about May 25 can come [to the memorial centre] and see the documentary film, the materials used in the trial, objects belonging to the children who were killed and all the other items that remind us of the saddest day in Tuzla’s history,” he said.

BIRN Bosnia and Herzegovina provided the documentary to the Kapija Memorial Centre, as well as an archive of articles about the incident and reports from the trial of Djukic.

Senad Begovic, who created the exhibition at the memorial centre, said that even more material can be viewed on its new website.

“It contains newspaper articles about May 25 from the day of the massacre onwards. There are also original court documents from Djukic’s trial, as well as reports by foreign media in English, German and French,” Begovic said.

A virtual tour of the memorial centre and the site of the attack can be seen here.