Kosovo’s Prime Minister Albin Kurti has vowed to revive the controversial idea of launching an international court case against Serbia for alleged genocide during the 1998-99 war, despite experts’ warnings that it’s unlikely to succeed.

Kosovo Prime Minister Albin Kurti said this month that he wants to take a genocide case against Serbia to an international court - two years after former Kosovo Assembly speaker Kadri Veseli made a similar threat.

In June 2019, lawmakers in the Kosovo Assembly approved a draft resolution demanding justice for a total of 186 massacres committed by Yugoslav Army troops and Serbian police and paramilitary forces during the war in Kosovo and calling for a new tribunal to try crimes against humanity and genocide against ethnic Albanians during the 1998-99 war.

Veseli argued that Yugoslav President Slobodan Milosevic’s regime had the intent to destroy Kosovo Albanians as a group, thereby committing genocide as defined in the UN’s Convention on the Prevention and Punishment of the Crime of Genocide. He called for a new international tribunal to prosecute Serbs.

But Veseli’s proposal was described as political opportunism by opponents within Kosovo, and dismissed by international experts as impractical and extremely unlikely to succeed.

Nothing was done to push forward the initiative, and then Veseli himself was arrested last November for allegedly committing war crimes and crimes against humanity when he was a Kosovo Liberation Army guerrilla, and sent to the Kosovo Specialist Chambers in The Hague to stand trial.

Now the idea is being revived by Veseli’s former opponent, Kurti, a left-wing politician who became prime minister in March and is pushing the idea of an international court case in a similar manner to Veseli in 2019.

Kurti’s office denied that his idea has anything to do with Veseli’s, however, insisting it was based an obligation derived from the resolution adopted by the Kosovo Assembly.

“The genocide lawsuit against Serbia should have been filed in 2008 when Kosovo declared its independence. Since this has not been done, we are obliged to do it,” Kurti’s office told BIRN.

“The government of Kosovo has an obligation to its citizens, whose wounds remain open, to prepare a lawsuit for genocide,” it added.

Kurti promoted the genocide case during his campaign for February’s elections, appealing to a wide constituency in Kosovo associated with the Kosovo Liberation Army’s legacy and political heritage. He also mentioned the genocide case when announcing the legislative programme for his new government’s term in office.

Last week, Kurti was cautioned against pushing ahead with the initiative by the German ambassador to Pristina, Jorn Rohde.

“I think it is maybe not the right way forward. Because this would be a very lengthy process, many things in Kosovo could be delayed and it is not known how it would end. If you ask me if this is the right step, my answer would be no it’s not,” Rohde said.

“Politically, to sue a country for genocide means to send the whole country to court. It is very important, for Germany too, when we look at the history of my country, to face the past, but the guilt is always individual,” he added.

Natasa Kandic, coordinator of the RECOM initiative for a Balkan truth commission and founder of the Humanitarian Law Centre NGO, which has documented war crimes in Kosovo, also dismissed the initiative.

“This is a political initiative which will not contribute to the rule of law or justice for victims,” Kandic said.

Kurti’s office denied this: “For human reasons, never political ones, we are committed without deceit to exhaust every tool for truth and justice to triumph,” it said.

Questions have also been raised about the timing of Kurti’s move, which comes as the Kosovo Specialist Chambers prepare to try Veseli and several other senior KLA figures who became post-war political leaders, including ex-president Hashim Thaci.

‘Serbia spared no effort to exterminate us’ 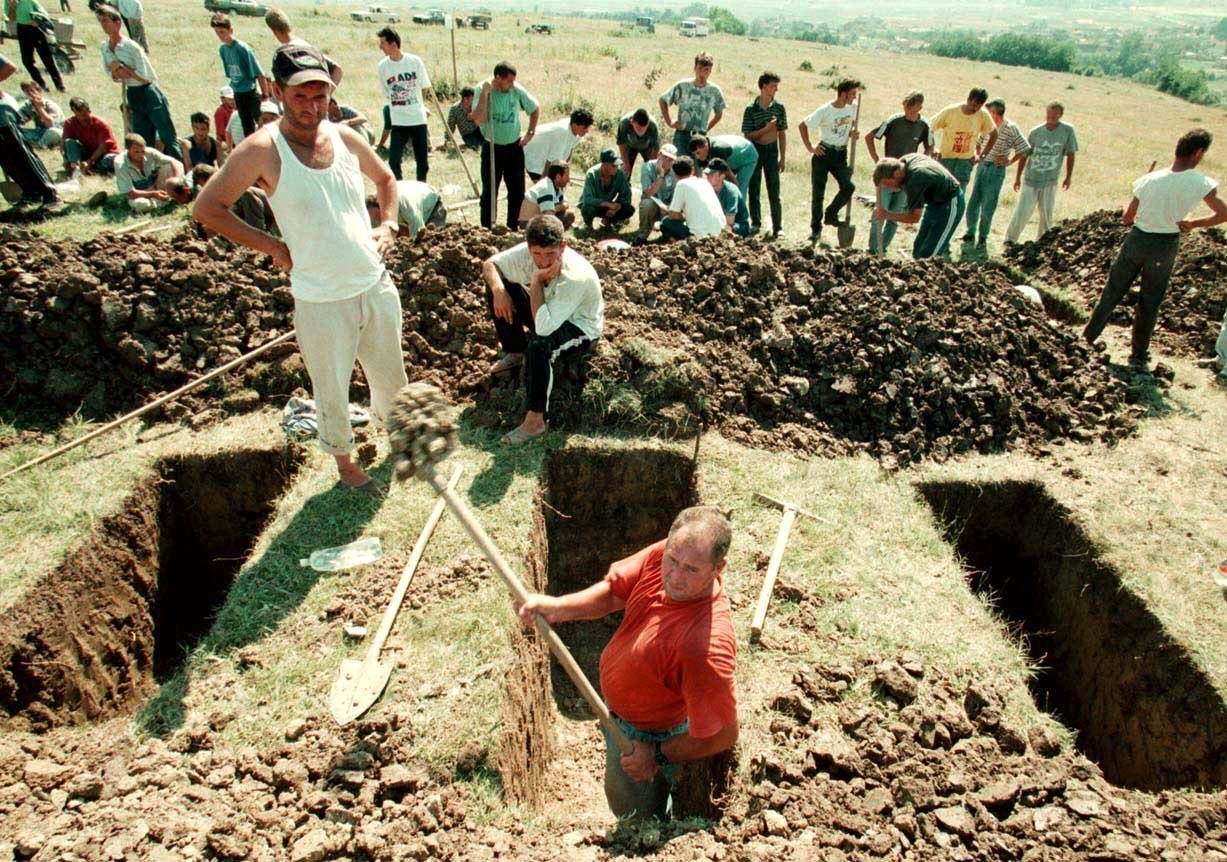 Graves being prepared for a mass funeral in July 1999 near the Kosovo village of Bela Crkva, where locals were massacred by Serbian forces. Photo: EPA/STATON R. WINTER.

Bringing a genocide case against Serbia has long been a topic in political discourse in Kosovo, and war victims who have yet to see perpetrators prosecuted for crimes committed by Serbian forces want the country’s politicians to take action to achieve justice.

Flurim Hajdari, whose father and five brothers, the youngest of whom was 12 years old, were killed in a massacre in Krusha e Vogel/Mala Krusa in March 1999, supports the idea that Kosovo should take Serbia to court.

“In Kosovo, Serbia attempted genocide and spared no effort to exterminate us,” Hajdari told BIRN.

“If Kosovo doesn’t do it, it would be pardoning Serbia for the bloodshed it caused. This would be unforgivable,” he added.

But although political leaders have talked a lot about it, no serious efforts have ever been made to prepare such a case, although the government has said it is planning to establish an institute to collect evidence.

Gezim Visoka, a Kosovo-born associate professor of Peace and Conflict Studies at Dublin City University in Ireland said that it hasn’t really been taken seriously, “just like the whole issue of transitional justice and dealing with the past has lacked serious strategic thinking and policy action”.

The International Criminal Tribunal for the Former Yugoslavia, ICTY found several individual Bosnian Serbs guilty of against Bosniaks from Srebrenica, but no one from Serbia was ever charged with genocide against Kosovo Albanians.

“As demonstrated in several cases at the ICTY, the Yugoslav army and police committed countless war crimes and crimes against humanity in Kosovo, but it found little evidence of genocidal acts,” Balkans expert Christian Axboe Nielsen, associate professor of Southeast European Studies at Aarhus University in Denmark, told BIRN.

Previous attempts to prove that the Serbian state was responsible for genocide have failed.

Both Bosnia and Herzegovina and Croatia initiated proceedings at the International Court of Justice, claiming that Belgrade violated the Convention on the Prevention and Punishment of the Crime of Genocide.

In 2007, the ICJ determined that Serbia had failed to prevent the Srebrenica genocide, but was not responsible for it or complicit in committing the crime. Croatia’s case was rejected in 2015, as was Serbia’s counter-suit accusing Croatia of genocide.

The ICJ did issue a landmark legal opinion in 2010 that Kosovo’s declaration of independence was lawful. However, the court will only hear cases that are initiated by states that are members of the United Nations, which Kosovo is not.

‘The prospects of success are slim’ 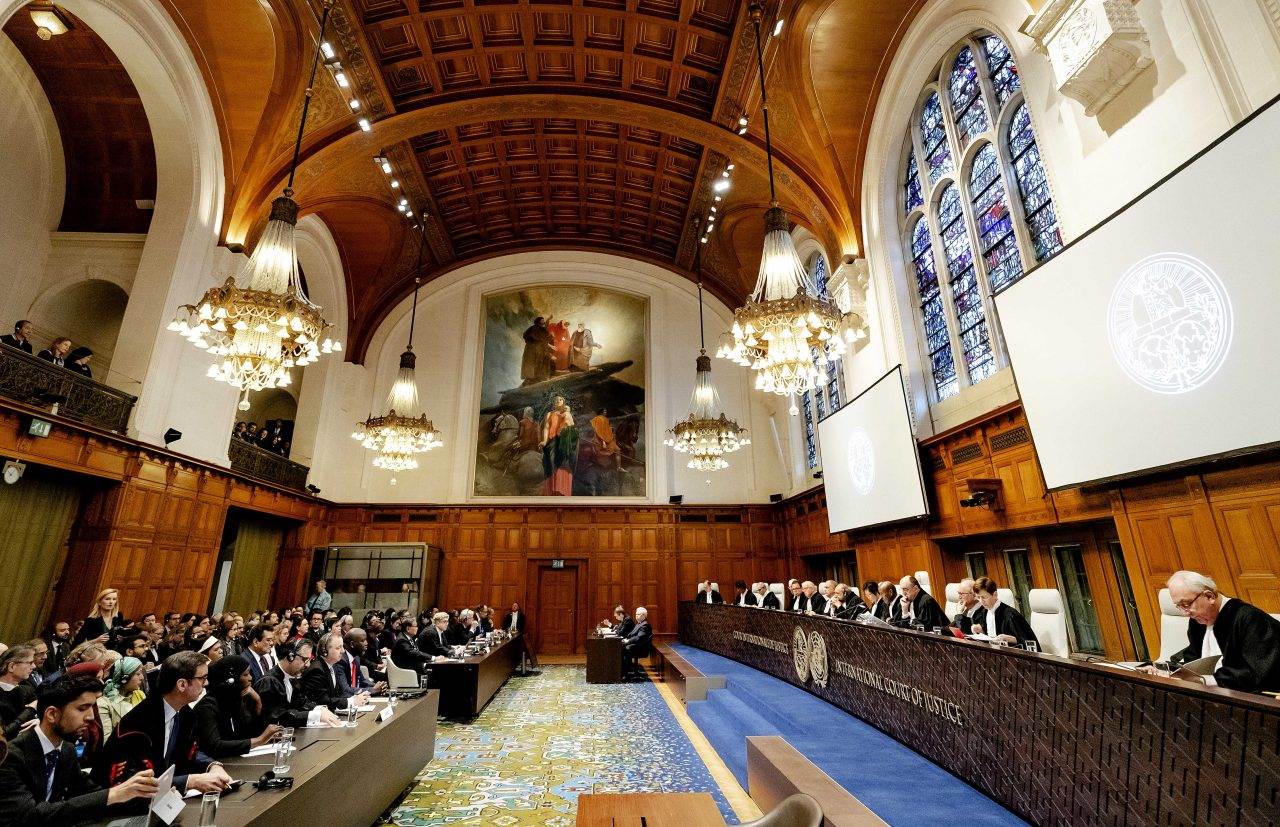 The International Court of Justice in session in The Hague in January 2020. Photo: EPA-EFE/ROBIN VAN LONKHUIJSEN.

Florian Bieber, coordinator of the Balkans in Europe Policy Advisory Group and professor of Southeast European History and Politics at the University of Graz in Austria, argued that it is unlikely that the ICJ will accept a case brought by Kosovo.

“The prospects of any success are very slim, considering the rulings of the ICTY that found war crimes but not genocide [in trials related to the Kosovo war],” Bieber told BIRN.

He suggested that Kurti might be planning to use the case as leverage in the ongoing EU-mediated dialogue with Serbia aimed at normalising relations between the two foes.

“It might be a way to use as part of the bargaining with Serbia, ie. using it to offer to drop the case in exchange for compromises but considering the limited odds of success that seems not that useful,” he said.

Visoka argued that the proposed case serves domestic purposes for Kurti within Kosovo – it solidifies popular support and neutralises opponents who have been calling him to dismantle the Kosovo Specialist Chambers. It also antagonises the Serbian government, which could delay the negotiations in Brussels.

“It helps Kurti to buy more time to prepare better and enhance his bargaining power in talks on sensitive topics,” he said.

Past cases at International Court of Justice have also demonstrated that the threshold for determining that the UN’s Convention on the Prevention and Punishment of the Crime of Genocide has been breached is high, Visoka noted.

“The chances are slim for [Kosovo’s] case to be successful and get an affirmative verdict from the ICJ,” he said.