A road company in Serbia owned by Austrian Strabag hired 28 inmates in 2016 for less than a euro per hour, BIRN can reveal.

In October 2016, a team of construction workers was making the 40-kilometre journey from the eastern Serbian town of Knjazevac, where they were rebuilding a bridge, to Zajecar when the driver of the Ford van they were in slammed into a concrete culvert.

The workers were employed by a local road company owned by one of the biggest construction firms in Europe – Austrian Strabag. But they were not alone in the van.

Nebojsa Budjelan, head of Strabag’s work safety at the time, recalled getting a call from the duty foreman at around 7 p.m. telling him prison inmates were working with the regular company workers on the reconstruction of the bridge in Knjazevac and that some of them were injured in the accident.

“I almost had a heart attack,” Budjelan told BIRN.

He said he had no idea prison inmates were working on the site side-by-side with Strabag’s regular, qualified construction workers.

And for that the County Prison in Zajecar was being paid an hourly rate of just 120 dinars per inmate, or less than one euro, BIRN can reveal. Under the law at the time, the inmates were entitled to at least 20 per cent of that sum, or just under 20 euro cents. And because they were inmates, the road company PZP Zajecar, as it was called at the time, did not have to pay taxes or other contributions.

“We sometimes used inmates before, but only in collecting roadside garbage and washing signs,” said Budjelan. “This is the first time they were doing the same as standard construction workers.”

“Their only qualification is their price of 1,000 dinars [roughly 10 euros] per day, no matter how many hours they work.”

Strabag confirmed it sometimes hired prison inmates but said the recruitment was carried out in line with Serbian law.

Prisons in Serbia are allowed to hire out inmates to private companies and, according to Article 101 of the Law on Execution of Criminal Sanctions, are “entitled to market compensation”.

In the first half of 2016, according to official data, the average salary of a construction worker in Serbia was around 322 euros per month, or roughly two euros an hour.

With taxes and other contributions such as healthcare and pension, the average worker would cost a construction company around 444 euros per month, or 2.77 euros an hour. 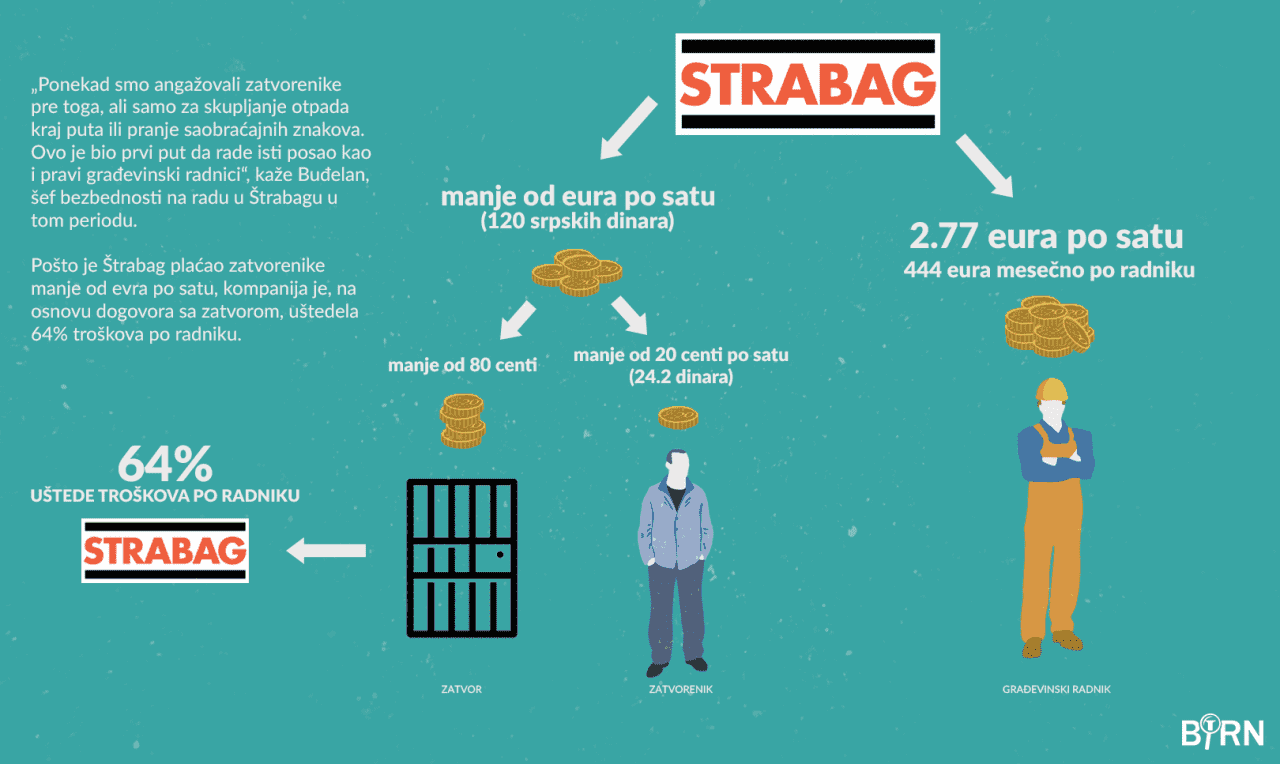 However, the Directorate for the Execution of Criminal Sanctions, which is part of the justice ministry, told BIRN: “Not one article of the law obliges a prison to agree compensation for work or the sale of products at market prices.”

The prison, it said, is not motivated by profit but by the benefits to the inmate of training and work experience.

What constitutes ‘market compensation’ is disputed, but experts in the field question the fee paid to the prison.

Milos Jankovic, a former head of the Directorate who worked on the rights of individuals deprived of their liberty as Serbia’s deputy ombudsman, said the fee was “in obvious disproportion to the usual price of a working hour.”

“The private company,” Jankovic told BIRN, “clearly gets the extra money, which is the difference between the minimal and market price of labour.”

Human rights lawyer Nikola Kovacevic, an expert in the same field, told BIRN: “Without a doubt the price of 120 dinars per hour is inadequate and unjust and also may indicate some kind of misuse.”

In its response, Strabag said it took part in “social projects” across Europe “as we feel obliged to contribute to the healthy development of society as a whole.”

In a written statement to BIRN, the construction giant confirmed hiring inmates but stressed that everything was carried out in line with the law.

The Directorate denied that the prison inmates were engaged in any construction work that would require a formal level of qualification.

Indeed, the original contract signed on March 15, 2016, stipulated that the prison would provide as many inmates as required for “removal of roadside litter and cleaning of tubular culverts”, while PZP Zajecar would take care of health and safety issues and transportation.

In September 2016, however, several days before the Knjazevac bridge reconstruction work began, the two sides signed an annex to the contract expanding the scope of the inmates’ work to “transferring work materials in the repair of bridges and roads”.

On October 10, 2016, the Independent Road Workers’ Union of Serbia sent a letter, seen by BIRN, to Serbia’s Ministry of Labour saying that PZP Zajecar’s intention to continue and expand the hiring of inmates was “worrying”.

“We are both worried for the inmates and for workers who can lose their jobs this way. It is clear PZP Zajecar makes extra profit, but we are of the opinion that the company with this crossed all lines with its activities.”

The European Prison Rules state that “in all instances there shall be equitable remuneration of the work of prisoners” and, as far as possible, “prisoners who work shall be included in national social security systems”.

However, since the rules are not mandatory, according to European Prison Observatory studies conducted in 2013, the recommendations are widely ignored.

Strabag and the Zajecar Country Prison ceased its cooperation at the end of 2016.

From March to October 2016, a total of 28 inmates were hired, though not all at the same time, according to the Directorate for the Execution of Criminal Sanctions. 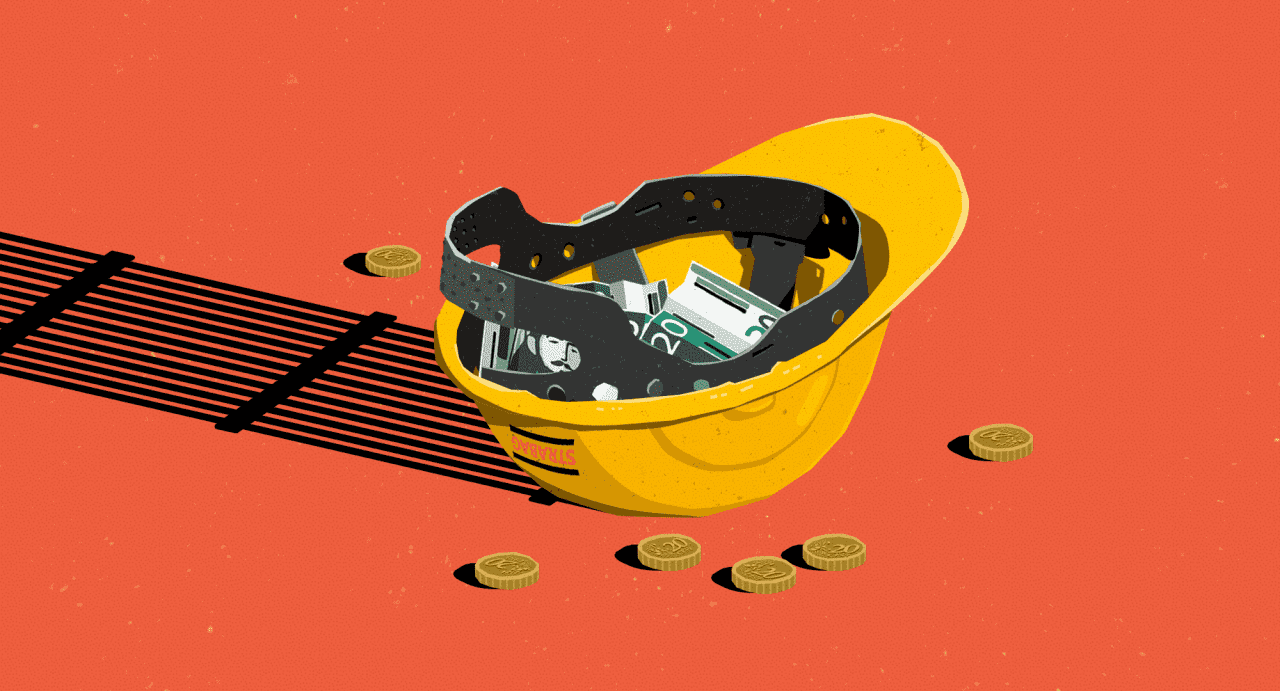 Strabag a major player in Serbia

Strabag has worked in Serbia since the 1960s when the country was part of federal Yugoslavia, but it really began growing its presence in the 2000s, when the Austrian company acquired several local road companies and became one of the biggest players in the industry.

It bought formerly state-owned PZP Zajecar in 2005 for close to four million euros, and has picked up a string of lucrative and high-profile contracts from the state.

The company is involved in building a controversial, United Arab Emirates-funded riverside development called Belgrade Waterfront in the Serbian capital.

In September 2018, two workers died after falling from a Belgrade Waterfront building on which Strabag was a contractor. Strabag at the time said “the human factor is ubiquitous in such activities”. Serbia’s labour ministry refused media requests to see the labour inspection reports on the incident and prosecutors say the case is still in the “expert phase”.

Serbia’s labour ministry told BIRN it was unable to confirm how many complaints it had filed against Strabag over the last five years.

But it is not only in Serbia that Strabag has had issues with workers’ rights.

In 2013, Human Rights Watch reported on the exploitation of migrant workers at the site of the Sochi Winter Olympics in Russia.

The chairman of its supervisory board is former Austrian chancellor Alfred Gusenbauer, who in September 2013 became an adviser to the Serbian government at the invitation of then deputy Prime Minister Aleksandar Vucic, Serbia’s current president and head of the ruling Progressive Party.

Serbia’s prisons are among the most overcrowded in Europe, according to a 2018-2019 study by the Council of Europe that said the average number of prisoners per 100,000 people in Serbia was 156.1 compared to a European average of 125.9.

Kovacevic, the human rights lawyer, said the main reason was the litany of short-term prison sentences handed out in Serbia.

“It is pretty easy to end up in jail in Serbia given that the practice of judicial authorities is mostly retributive,” he told BIRN. “Many of these short-term imprisonment sentences could be replaced by an alternative sanction, at least under the criminal code.”

“The profile of people residing in penitentiary homes is generally of a lower social status,” he added. Given the dire employment prospects outside prison and the lack of state support, “they end up in jail over and over again.”

This all results in a large pool of potential prison labourers. Kovacevic, however, said it was unclear how developed the system of inmate labour had become “since there’s no official data.”

BIRN asked the Directorate for the Execution of Criminal Sanctions for data on inmate recruitment for private companies but received no reply.