Pro-Serbian political party activists staged a protest and reportedly sang nationalistic songs in the northern town of Pljevlja after the Montenegrin government appointed a Bosniak as the local police chief. 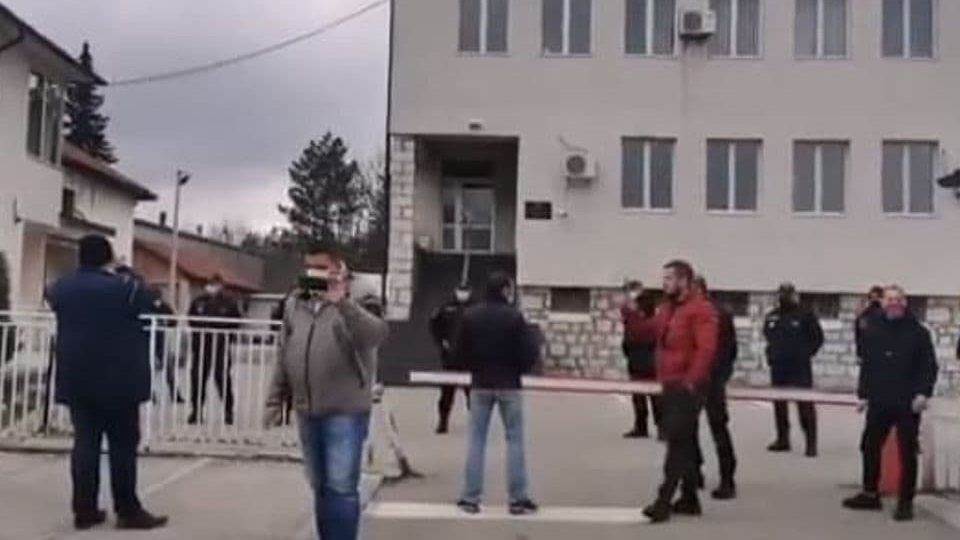 Protesters outside the police station in Pljevlja. Photo: Facebook/Printscreen

Activists from the pro-Serbian Democratic Front and Democratic Montenegro parties, which are part of the country’s ruling alliance, staged a protest in Pljevlja on Monday, calling on the government to reverse its decision to appoint Haris Djurdjevic, a Bosniak, as the head of the local police.

Media reported that some protesters who gathered near the police station were singing nationalistic songs and chanting: “Serbian Sparta has been waking up, this country will not become Turkey.”

The appointment of Djurdjevic came after a series of ethnically-motivated incidents last year in the town, which has a large Bosniak population.

The Democratic Front and Democratic Montenegro said that by appointing Djurdjevic, the government was taking the “unacceptable position” of blaming Serbs for the incidents.

“Is it a reasonable move to oppose alleged Serbian nationalism by appointing to a leading position in the police someone who the whole city recognises for his extreme political and nationalist views?” the parties asked in a joint statement.

They also claimed that Djurdjevic is close to the Democratic Party of Socialists, the party that was ousted from office in elections last year after some three decades in power.

Opposition parties called on the government to intervene, saying that the protest was being held because Djurdjevic is a member of an ethnic minority.

“Is this the democratic step forward [the government] announced? I would rather say that this is a return to the dark 1990s,” said Nihad Canovic from the opposition Social Democrats said.

The head of the Islamic Community in Montenegro, Rifat Fejzic, also alleged that ethnic bias was behind the protest against the appointment of a Bosniak to head the local police force.

Djurdjevic has made no comment about the protest so far.

In September last year, unknown assailants smashed windows at the Pljevlja office of the Islamic Community, the official body representing the country’s Muslims, and threw a message through a broken window warning that “Pljevlja will be Srebrenica” – the town in Bosnia and Herzegovina where Bonian Serb forces killed more than 8,000 Bosniaks in July 1995.

At the time, opposition parties, which are now in government, called on the authorities to find the perpetrators, but the culprits were never prosecuted.

Montenegro is a multi-ethnic state in which no community has an absolute majority. About 45 per cent of the population identify themselves as Montenegrin and about 29 per cent as Serb.

Bosniaks make up roughly 8.3 per cent of the population, and mostly live in the northern towns of Rozaje, Pljevlja, Bijelo Polje, Petnjica, Plav and Gusinje.